The State authorities organized this regiment October 19, 1861, at East New York, by the consolidation of organizations being recruited originally under authority from the War Department, namely: the U. S. Vanguard, recruited by Col. Wm. L. Tidball, under authority dated July 24, 1861; the Presidents Life Guard, by Col. R. IX Goodwin, the U. S. Volunteers, by Col. Wm. Northedge, the Union Guard, by Col. P. J. Joachimsen, under authorities dated July 22, 25 and 26, 1861, respectively; New York's or Ming's Own, Col. Alex. Ming; Cameron Highlanders and Kossuth Guards, and Cameron Legion or Rifles or Sarsfield Rifles, by Col. C. A. Dunham; all incomplete. The Union Guard and U. S. Vanguard united first and formed Companies B, C, D, E, F, G and H; the President's Life Guard formed Company A; New York's Own and the Cameron Highlanders Company I, and the Sarsfield Rifles Company K. William L. Tidball was appointed Colonel of the new organization, and the latter was mustered in the service of the United States for three years between August 2 and October 30, 1861. June 25, 1863, it was consolidated into a battalion of four companies, A, B, C and D, the men of Companies G and K being transferred to Company A; those of E and H forming Company B; those of B and D being transferred to Company C; and those of F and I forming Company D. July 4, 1864, the enlisted men of the 82d Infantry, not mustered out with their regiment, were transferred to this, forming Companies E, F, G, H and I, and about the same time Company K was reformed of recruits. At the expiration of its term of service, those entitled thereto were discharged and the regiment retained in service.
The companies were recruited principally: A, C, D, E, F and K in New York city; B in New York city, Lewis, Jefferson and Kings counties; G in New York City and Lewis county; H in Ohio, and I in New York city and Ohio; a few of the men were recruited in the counties of Putnam and Westchester.
The regiment left the State November 23, 1861; it served in General Wadsworth's command at and near Washington, D. C., from November, 1861; in 2d Brigade, Casey's Division, 4th Corps, Army of the Potomac, from January, 1862; at Fort Pennsylvania, Military District of Washington, D. C., from March 18 1862; in Sturgis' Brigade, Military District of Washington, from May, 1862; in 4th Brigade, Sigel's Division, Department Shenandoah, from May, 1862; in 3d Brigade, 2d Division, 2d Corps, Army of the Potomac, from July, 1862; in 1st Brigade, 2d Division, 2d Corps, Army of the Potomac, from March, 1864; and it was honorably discharged and mustered out, under Col. Wm. A. Olmsted, June 30, 1865, at Munson's Hill, Va.
During its service the regiment lost by death, killed in action, 5 officers, 79 enlisted men; of wounds received in action, 9 officers, 48 enlisted men; of disease and other causes, 1 officer and 130 enlisted men; total, 15 officers, 257 enlisted men; aggregate, 272, of whom 1 officer and 64 enlisted men died in the hands of the enemy.

Fifty-ninth Infantry.—Cols., William Linn Tidball, William Northedge, William Linn Tidball, Henry W. Hudson, William A. Olmstead; Lieut.-Cols., Philip I. Joachimsen, John L. Stetson, William Northedge, Max A. Thomain, William Linn Tidball, Horace P. Rugg, James A. Jewell, Thomas Huggins, James A. Jewell; Majs., William Northedge, Max A. Thomain, James H. Purdy, William McFadden, Michael H. Donovan, William T. Simms. The 59th, the "Union Guards," was organized in New York city from the U. S. Vanguard, President's Life Guard, U. S. Volunteers, Union Guard, Cameron Highlanders, Kossuth Guards and Cameron Legion, and was mustered into the U. S. service from Aug. 2 to Oct. 30, 1861, for a three years' term. The regiment left for Washington on Nov. 19, was attached to Gen. Wadsworth's division and served in the vicinity of Washington until Aug. 1862. It was then successively attached to the 2nd brigade, Casey's division, 4th corps; Sturgis' brigade and the 4th brigade, Sigel's division, Department of the Shenandoah. In July, 1862, the regiment was assigned to the 3d brigade, 2nd division, 2nd corps, Army of the Potomac and was first sent to the front at Malvern hill. The troops showed their mettle at Antietam, where they bravely stood their ground under a fire which reduced their ranks from 321 officers and men to 76. In the disaster of Sedgwick's division at the Dunker Church Lieut.-Col. Stetson and 8 other officers were wounded, an almost unprecedented loss among the army organizations. Proceeding next to Fredericksburg, the regiment arrived in time to play its part in the battle, in which its loss was 44 in killed, wounded and missing. The winter was spent in the vicinity of Falmouth, and in May, 1863, the command was active in the Chancellorsville campaign, returning to its old camp for a short time before the Gettysburg, movement began. On June 25, the 59th was consolidated into four companies, owing to the reduction in its numbers and on July 4 the veterans and recruits of the Sand N. Y. infantry, forming five companies, were received, and also one company of new recruits. The regiment fought bravely at Gettysburg, Auburn, Bristoe Station and Blackburn's ford and shared in the Mine Run fiasco. A large number of its members reenlisted in the winter of 1863-64 and as a veteran organization the regiment fought through the Wilderness campaign, attached to the 1st brigade, 2nd division, 2nd corps. At the Wilderness, Spottsylvania, the North Anna, Toto-potomy, Cold Harbor and Petersburg, the reputation of the command as a crack fighting regiment was nobly sustained. In actions before Petersburg, at the Weldon railroad, Deep Bottom, Strawberry Plains, Reams' station, the Boydton road, and Hatcher's run, over 200 of the regiment were killed, wounded or reported missing. It was present at the final assault on the Petersburg fortifications and was then stationed at Munson's hill, Va., where it was mustered out on June 30, 1865, haying rendered such effective service to the Union cause as entitled it to rank among the "three hundred fighting regiments of the war." The regiment lost 141 by death from wounds and 130 from accident, imprisonment or disease, of whom 64 died in Confederate prisons. 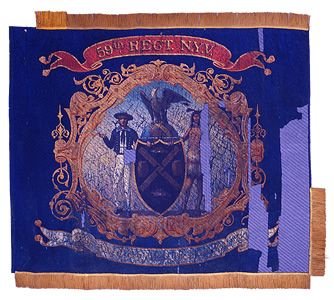 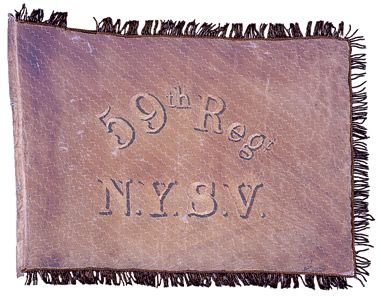 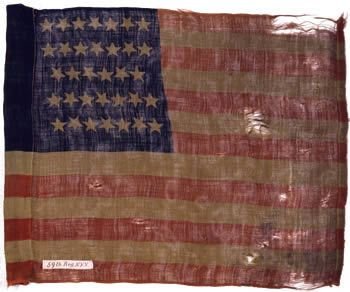 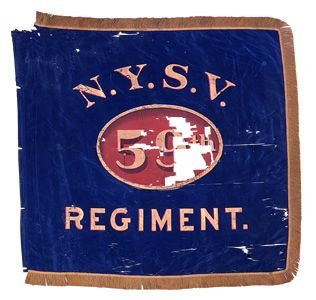 Between August 2 and October 30, 1861, the 59th Regiment NY Volunteer Infantry, or “Union Guards,” mustered into service for three years. These two… 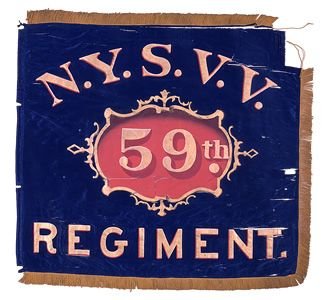 The 59th Regiment NY Volunteer Infantry mustered into service for three years between August 2 and October 30, 1861. When the three-year term expired,…

History of Regimental Colors of the 59th Regiment 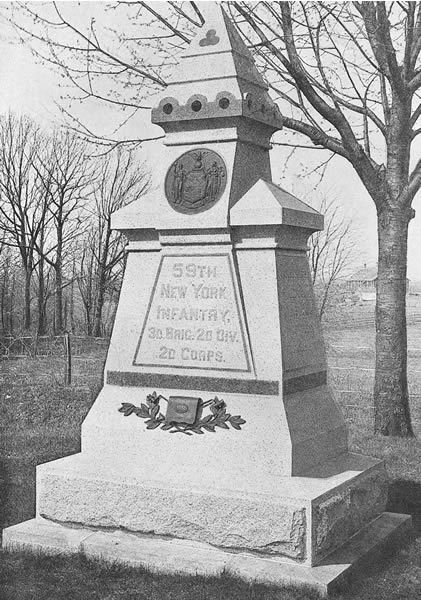 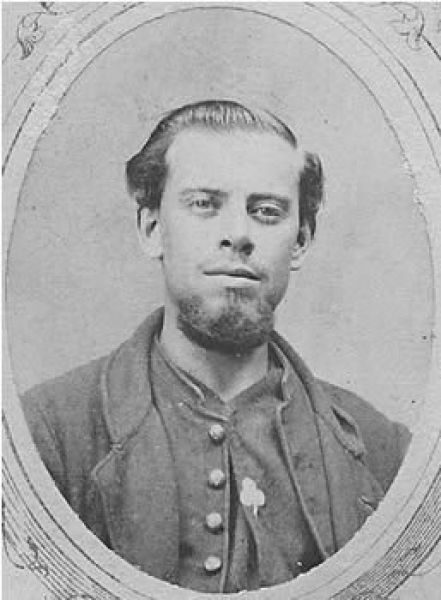 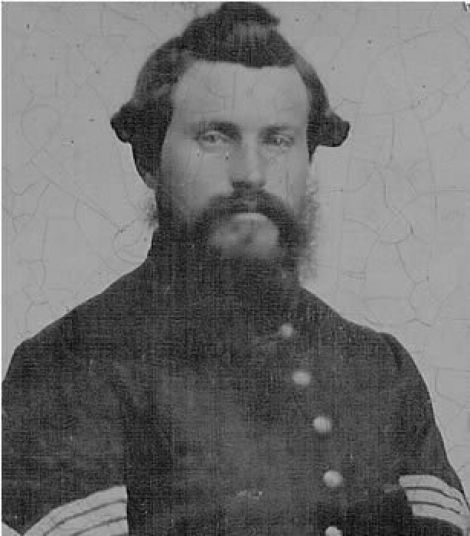 Horton, William S. Letters(1861-1865)
Description: 7 items
Abstract: Letters written by William S. Horton in regards to his experiences of serving in the Army during the Civil War. Horton was enrolled in Company I of the 59th New York Regiment of Infantry.
Located at the New York State Library Manuscripts and Special Collections.

Willett family papers, 1849-1865.
Description: .7 linear ft.
Abstract: Family correspondence with material on day-to-day life, including letters relating to the Civil War; genealogical material; diary, 1860-1861, of Gordon A. Willett; diary, 1862, of Mary Yates Willett, who served with the U.S. Sanitary Commission during the Civil War; and diary, 1864 of James W. Willett, sutler with the 59th New York Infantry during the Civil War.
Located at the University of Michigan, Bentley Historical library.