The following is taken from New York in the War of the Rebellion, 3rd ed. Frederick Phisterer. Albany: J. B. Lyon Company, 1912.
This regiment was organized at New York City October 11, 1861, but its organization not completed until October 29, 1861, when the German Rangers were united with the Sigel Rifles. The former were in course of recruiting under Col. Emil Von Schoening under authority from the War Department dated July 27, 1861; at the time of the consolidation part of the Honved Regiment, Col. Edward Count Wratislaw, had already been merged into the German Rangers. Companies A, B, C, D, E, F and G were formed of the latter, and H, I and K of Companies A, C and D of the Sigel Rifles. Company B of the latter was merged in Companies H, I and K of the new organization, of which Col. Paul Frank of the Sigel Rifles was appointed Colonel. The companies were recruited in New York City and there mustered in the service of the United States for three years, between August 3 and November 5, 1861. At the expiration of its term of service in August, September and October, 1864, the men entitled thereto were discharged, and the regiment retained in service, but consolidated into six companies, the old Companies E, F, G, H, I and K becoming new Companies A, B, C, D, E and F, respectively, and a new Company G was formed of recruits received in the field.
The regiment left the State November II, 1861; served in French's Brigade, Stunner's Division, Army of the Potomac, from November, 1861; in the same, 3d, Brigade, Richardson's, 1st, Division, 2d Corps, Army of the Potomac, from March 13, 1862; in the 1st Brigade, 1st Division, 2d. Corps, from August, 1862; in the 3d Brigade, 1st Division, 2d Corps, from September, 1862; in the Consolidated Brigade, 1st Division, 2d Corps, from July, 1864; in the 3d Brigade, 1st Division, 2d Corps, from November 2, 1864; and it was honorably discharged and mustered out, commanded by Col. Henry M. Karples, July 1, 1865, at Alexandria, Va.
During its service the regiment lost by death, killed in action, 8 officers, 82 enlisted men; of wounds received in action, 6 officers, 56 enlisted men; of disease and other causes, 199 enlisted men; total, 14 officers, 337 enlisted men; aggregate, 351; of whom I officer, 107 enlisted men, died in the hands of the enemy.

The following is taken from The Union army: a history of military affairs in the loyal states, 1861-65 -- records of the regiments in the Union army -- cyclopedia of battles -- memoirs of commanders and soldiers. Madison, WI: Federal Pub. Co., 1908. volume II.
Fifty-second Infantry. — Cols., Paul Frank, Henry M. Karples; Lieut-Cols., Philip J. Lichtenstein, Charles G. Fredenburg, George W. Von Schack, Henry M. Karples, James C. Bronson, Henry P. Ritzius; Majs., Charles G. Fredenburg, Edward Venuti, Henry M. Karples, Henry P. Ritzius, Charles Kronmeyer. The 52nd, known also as the Sigel Rifles, composed of six companies of the German Rangers and four companies of the Sigel Rifles, was recruited in New York city and there mustered into the U. S. service Nov. 5, 1861, for a three years' term. It left the state for Washington on Nov. 12, with 950 men, went into camp at Bladensburg and was assigned to Sumner's division, in the brigade which later became the 3d brigade, 1st division, 2nd corps, Army of the Potomac. Winter quarters were established at Camp California, Va., and there the regiment remained until March 10, 1862, when it moved to Man-assas, thence to Alexandria and on April 4 embarked for York-town. It participated in the siege of Yorktown, was closely engaged at Fair Oaks, with the loss of 122 in killed, wounded or missing out of 320 engaged. It took part in the Seven Days' battles and when the army rested at Harrison's landing in July the regiment was able to present but 67 men for active duty, having suffered severely. during the entire campaign both from wounds and sickness In August the ranks were greatly strengthened, when the fti Kimem, attached to the 1st brigade, 1st division, 2nd corps, moved to Alexandria and in September to Tennallytown, where it was transferred to the 3d brigade. It reached South mountain .after the battle, was closely engaged at Antietam and then en-f$mped at Harper's Ferry until Oct. 29, when it moved to Snicker's gap and encountered the enemy. On Nov. 17, it arrived at Fal-,mouth, participated in the battle of Fredericksburg, and then occupied winter quarters at Falmouth until April 28, 1863. The regi-ment was active in the Chancellorsville campaign, returned to camp at Falmouth until June 15, then moved to Gettysburg, where it arrived early in the morning of July 2 and was posted on Cemetery ridge, where it fought gallantly during the battle. Moving southward, the regiment was active in October at Bristoe Station, and Mitchell's ford; shared in the Mine run campaign in November and went into winter quarters at Stevensburg. On May 4, 1864, it broke camp for the Wilderness campaign and participated in the constant fighting of that month with heavy loss. At the Wilderness, Spottsylvania, the Po river, the North Anna river, Totopoto-moy and Cold Harbor it was prominent on the battle line, then moved to Petersburg, where it shared in the first assault and performed an active part in the arduous duties of the siege. It participated in engagements at the Weldon railroad, Deep Bottom, at Strawberry Plains, and at Hatcher's run. In July, 1864, the regiment was transferred to the consolidated brigade, 1st division, 2nd corps and in November, to the 3d brigade, 1st division, 2nd corps. In Sept. and Oct., 1864, the original members not reenlisted were mustered out at New York city. On March 29, 1865, the 52nd was engaged at White Oak ridge with heavy loss, and it was present at the final assault on Petersburg April 2. It was mustered out at Alexandria, July 1, 1865. During the term of service the command lost 153 by death from wounds, 94 by death from accident or disease, and 103 died in prison. In the battles in which the 52nd participated, it lost 752 members killed, wounded or missing. It is numbered among the "three hundred fighting regiments." 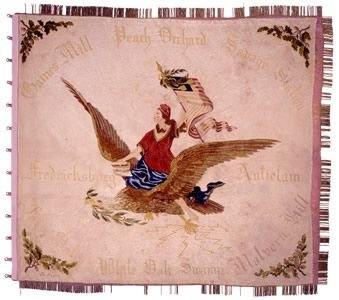 On October 30, 1861, May Matthews, representing the “ladies of Brooklyn,” presented this custom made regimental color to the 52nd Regiment New York… 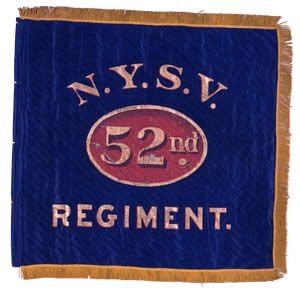 Ehlers, Edward M. Address by Edward M. L. Ehlers at the dedication of the monument erected by Major-General Daniel Butterfield at Fredericksburg, Virginia, to commemorate the services of the Fifth corps, Army of the Potomac, Memorial day, 1901. New York: Press of J. J. Little & co., 1901.