The following is taken from The Union army: a history of military affairs in the loyal states, 1861-65 -- records of the regiments in the Union army -- cyclopedia of battles -- memoirs of commanders and soldiers. Madison, WI: Federal Pub. Co., 1908. volume II.
One Hundred and Fourth Infantry.—Cols.-, John Rohrbach, Lewis C. Skinner, Gilbert G. Prey, John R. Strang; Lieut.-Cols., R. Wells Kenyon, Lewis C. Skinner, Gilbert G. Prey, Henry G. Tuthill, John R. Strang, H. A. Wiley; Majs., Lewis C. Skinner, Gilbert G. Prey, John R. Strang, Henry V. Colt, Henry A. Wiley, William C. Wilson. This regiment, known as the Wadsworth Guards, or the Livingston county regiment, was recruited in the counties of Albany, Genesee, Livingston, Monroe, Rensselaer and Steuben. It was organized at Albany by the consolidation of the Morgan Guards, under Col. John J. Viele, with the Genesee regiment under Col. Rohrbach, and was mustered into the U. S. service from September, 1861, to March, 1862, for three years. On the expiration of its term of service a sufficient number reenlisted to enable it to continue in service as a veteran organization. The regiment left the state on March 22, 1862, and served for some weeks in Gen. Wadsworth's command in the District of Washington. As a part of the 3d corps, it was in action for the first time at Cedar mountain, but about a week later it was assigned to the 1st brigade, 2nd division, 1st corps, and moved on Pope's Virginia campaign, being engaged at Rappahannock Station, Thoroughfare gap, Bull Run, and Little River turnpike, with a loss during the campaign of 89 killed, wounded and missing. Lieut. John P. Rudd, who fell at Bull Run, was the first man of the regiment to be killed. In September the 104th moved on the Maryland campaign under Gen. McClellan; fought at South mountain, and lost 82 in killed, wounded and missing at Antietam, where the 1st corps, under Gen. Hooker, opened the battle. At Fredericksburg it lost 52 killed, wounded and missing; was in reserve at Chancellorsville; was heavily engaged at Gettysburg, where it lost 194 in killed, wounded and missing; engaged without loss in the Mine Run campaign, the last campaign of the old 1st corps. In March, 1864, it was assigned to the 5th corps, with which it continued during the remainder of the war. It took part in all the bloody battles of the Wilderness cam-paign, losing heavily at Spottsylvania, the first assaults on Petersburg, and at the Weldon railroad. After Aug., 1864, it performed provost guard duty with its corps, and served with slight loss through the final battles of the war, ending with Lee's surrender at Appo-mattox. It was mustered out under Col. Strang, at Washington, D. G., July 17, 1865, having lost during its term of service 5 officers and 85 enlisted men killed and mortally wounded; 2 officers and 145 enlisted men by disease and other causes, a total of 237. 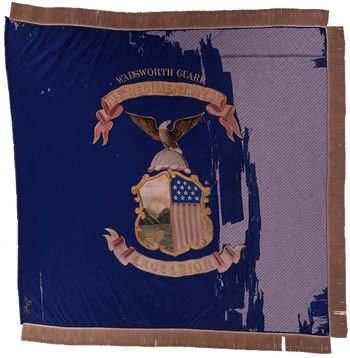 General James S. Wadsworth presented this “Tiffany Co.” marked silk regimental to the 104th Regiment in the spring of 1862. The flag features the…

Besancon, Henry.  Diary, 1862-1864.
Diary of Besancon's experiences during the Civil War while his unit was stationed in Virginia. He served as fifer and as a nurse in divisional hospitals. Also includes a list of expenditures giving wartime prices. 3 v.
Located at Duke University.

Hough, Franklin Benjamin. History of Duryee's brigade, during the campaign in Virginia under Gen. Pope, and in Maryland under Gen. McClellan, and the summer and autumn of 1862. Albany: J. Munsell, 1864.

Lamson, Albert T. Papers, 1916.
Civil War service certificate for Lamson, a New York native, who served with the 104th New York Infantry. The certificate provides a regimental history of the 104th New York Infantry as well as information about Lamson. It includes information about his capture at the Battle of Gettysburg, internment at Libby Prison and in South Carolina, and escape from prison. There is also brief biographical and genealogical information and in the collection is a letter from A.H. Church about an open house. The collection includes a "Personal Military and Civil History" book which was intended to be completed by Civil War veterans with service information. Lamson's is blank.
Papers 0.1 linear ft. (1 folder and 1 oversized folder).
Located at the Wisconsin Veterans Museum Research Center.

McCarthy, Dennis J. Dennis J. McCarthy papers, 1857-1887.
Contains the following type of materials: correspondence / letters. Contains information pertaining to the following war and time periods: 1848-1860; Civil War -- Eastern; 1865-1897. Contains information pertaining to the following military unit: 104th New York Infantry Regiment. General description of the collection: The Dennis J. McCarthy papers consist of the non-commissioned officer's (NCO's) correspondence with his sister during the Civil War, 1862-1865. He wrote most of the letters while campaigning in the field, as a prisoner of war (POW) following the Gettysburg battle, and during the Battle of Globe Tavern.
1 box.
Located at the Military History Institute in Carlisle, PA.

Monuments Commission for the Battlefields of Gettysburg, Chattanooga and Antietam . . . . Report of the New York Monuments commission on the dedication of monument to the One hundred and fourth New York volunteer regiment (Wadsworth guards), Antietam, Md., September 27, 1917. Albany: J. B. Lyons co., printers, 1918.

Roster of officers and actions in which they engaged.
A roster of all the officers listed by rank. It includes rank, dates of muster, cause of discharge, actions in which engaged, and remarks.
9 32 x 39 cm pages, hand-written.
New York State Military Museum, Verticle  File.

Satterlee, George. Letter, 4 June 1862.
6 pages.
Letter, 4 June 1862, from George Satterlee (ca. 1842-1865), 104th New York Infantry, at Centreville, Fairfax County, Virginia, to his sister. He writes about battle skirmishes and getting separated from his unit, scout duty, and notes that the rest of his regiment is in Manassas. He also inquires about other members of their family.
Accession 40572. Located at the Library of Virginia in Richmond, Virginia.
Thank you to Ed Worman for pointing out this resource.

Swartz, John F. Personal Recollections of a Veteran : John F. Swartz, a member of the 104th N. V. Y., relates something of his life in Southern prisons during the War of the Rebellion.
Donated by Barbara Wilcox.

Wiley, H. A. Letters, 1862-1863.
20 pages.
Letters, 1862-1863, from Captain H. A. Wiley (b. ca. 1836) of Company B, 104th New York Infantry, to his father and brother in Livingston County, New York, discussing military life, desertion and corruption, campaigning, civilians, and generals of the Union army. Wiley comments on campaigning in the Shenandoah Valley, General George McClellan and the Peninsular Campaign, intrigue among generals, Wiley's dislike of Generals Irvin McDowell and Abram Duryea, and the arrest of Ohio politician Clement Vallandigham by General Ambrose Burnside, as well as comments on the war effort.
Accession 45422. Located at the Library of Virginia in Richmond, Virginia.
Thank you to Ed Worman for pointing out this resource.