On July 12th, 1917 President Woodrow Wilson called out the entire National Guard of the United States for service against the Central Powers. The New York State National Guard Division was officially designated the 27th Infantry Division on July 20th, 1917. The division, which initially had nine infantry regiments grouped into three brigades was squared or reorganized into a more simplified four-regiment structure within two brigades. Some regiments were dropped from the unit, while others were renamed and enlarged. The 27th Division was eventually made up of the 53rd Infantry Brigade, consisting of the 105th and 106th Infantry Regiments, and the 54th Infantry Brigade, consisting of the 107th and 108th Infantry Regiments. The 52nd Field Artillery Brigade, which was made up of the 104th, 105th, and 106th Field Artillery Regiments and the 102nd Trench Mortar Battery was assigned as the divisional artillery, though once in Europe it never served with the 27th Division. The initial effective strength of the 27th Division was 991 officers and 27,114 enlisted men.

The newly reorganized division shipped out to Europe on April 20th 1918 and fought within several different British and American army units along with the 30th Infantry Division. The 27th was initially stationed in the East Poperinghe Line, and participated in actions at Dickebusch Lake and Vierstratt Ridge during the late summer of 1918, and then in September the struggle to break the formidable German defenses of the Hindenburg Line. On September 25th, the division participated in the Somme Offensive and provided a break through of the Hindenburg Line itself forcing the Germans into general retreat. After a final confrontation with the retreating Germans at the Le Selle River the Armistice ended the fighting and the division was sent home in February of 1919, to be mustered out several months later.

Official commendations of the 27th American Division, Belgium and France, 1918 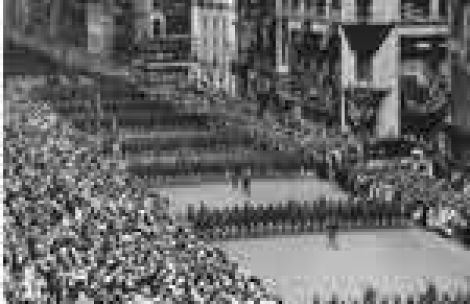 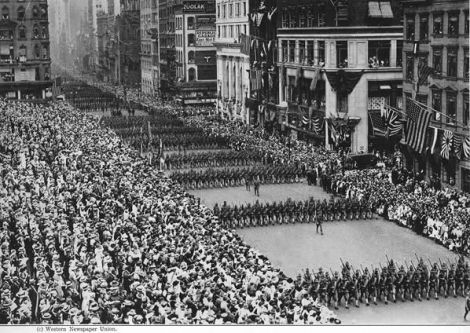 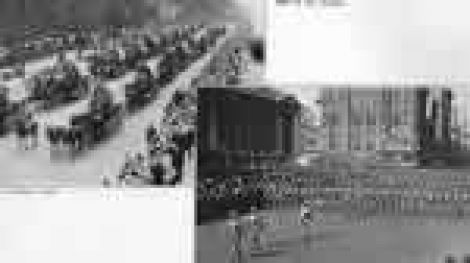 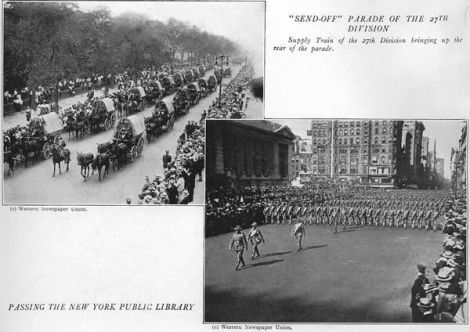 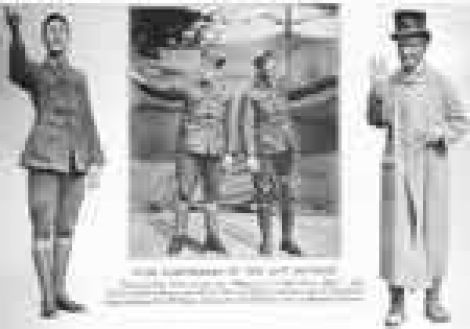 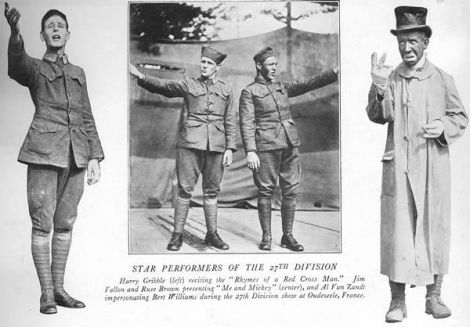 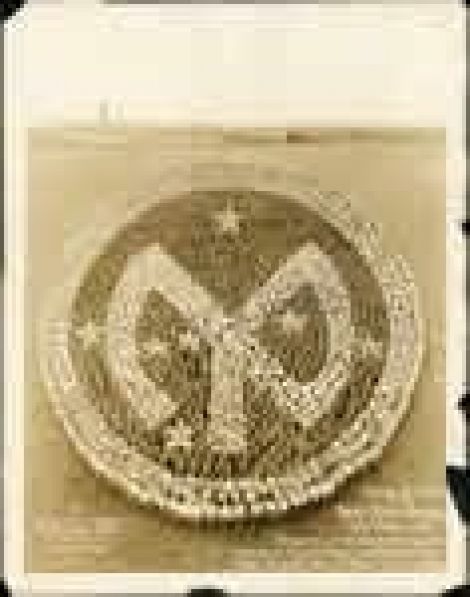 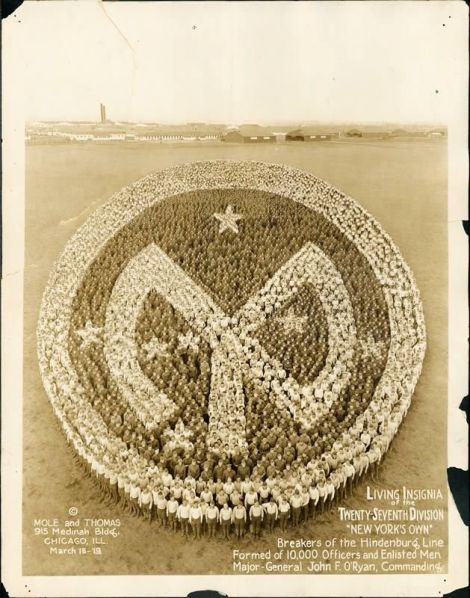 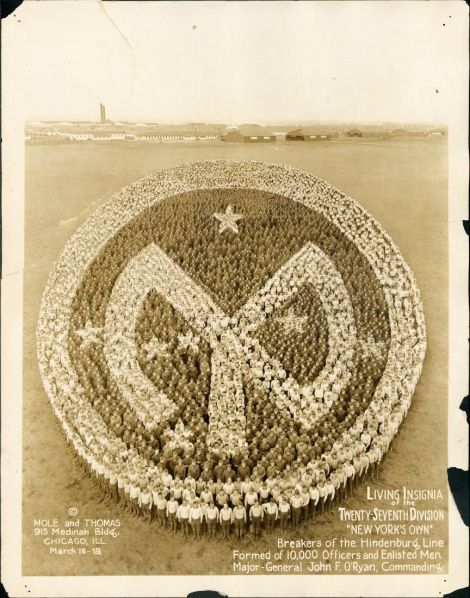 Casale, Michael. Doughboys of NYC: A photo essay of the World War One Doughboy Statues that are located in and around New York City.

New York (State). Education Dept. Division of Archives and History. World War I veterans' service data and photographs, 1917-1938 (bulk 1919-1924).
Quantity: 33.4 cu. ft.
Quantity: Copies: 53 microfilm reels; 35mm.
Arrangement: Alphabetical by county, then alphabetical by municipality.
Additional phys form: Microform is available at the New York State Archives through interlibrary loan.
Abstract: This series primarily contains personal information, service data, newspaper clippings, and photographs of New York State veterans of World War I, and some accounts of home front activities in the state. Also included is a small amount of material documenting contributions toward the war effort by the state's schools, faculty, and students as well as war work done by units of the Education Department.
Abstract: These records were collected by State Historians James Sullivan and Alexander C. Flick (from 1923) in response to a joint resolution of the senate and assembly to "collect, collate, compile, edit, and prepare for publication sufficient material, statistics, and data for a history of the State of New York in the World War...." Because no funds were appropriated for this work, the publication was never completed.
Abstract: The State Historian relied on officially appointed local historians to collect and forward information relating to their communities' roles in the war. Only two-thirds of the state's communities provided the requested information, and very few veterans from New York City are represented in the series. There are no files for Bronx, Queens, or Richmond counties.
Abstract: The contents of the files vary considerably, but each contains all or some of the following: list of soldiers from the community; service record forms for each veteran, usually providing name, address, place and date of birth, parents' names and address, date entered service, drafted or enlisted, military unit at entrance and discharge, brief outline of service giving duty stations, combat experience, wounds, and decorations received, and date, place, rank, and military unit at discharge or death; narrative statements of individuals' war service by veterans or the local historian; newspaper clippings documenting the return of soldiers, commemorative celebrations, or other soldier-related activities; transcripts of original letters written by soldiers while in the service, some written from France; photographs of soldiers, most in uniform and identified; narrative written by the local historian describing home front activities in the community; transcripts of community newspaper articles concerning local home front activities; souvenir booklets or other items of memorabilia; transmittal correspondence between the state historian and the local historian; and information on nurses who served in the war.
Abstract: Photographs in the series are primarily portraits of soldiers in uniform, taken either formally in studio settings or informally as private snapshots in home-like surroundings. Some are of the souvenir variety taken overseas. There are no scenes from the war front.
Abstract: The final box of the series contains important additional material (correspondence, reports, lists, bulletins, pamphlets, books, and a few photographs) on the New York State's contributions to the war. These materials provide information on: wartime activities of the state's schools, teachers, and pupils (e.g. Liberty Loan campaigns, Red Cross and civilian relief work, conservation activities, and work for base hospitals); war service of college and university students; wartime activities, especially through the Bureau of Educational War Service, of the Regents and the Education Department, including specific projects of the Division of Archives and History, the State Museum, and the State Library; and the reorganization of New York State troops in the federal service, including transcribed extracts from military cables and comuniques (May 1917-December 1918) on deployment and military actions of New York components of the American Expeditionary Force (the 77th, 42nd, 78th, and 27th Divisions).
Abstract: Copies of several noteworthy works are also found with this material: a research paper, New York State "Boys" in the War: A Report of Impressions Gathered From Sorting and Reading Soldiers' Letters of the World War During the Summers of 1934 and 1935, prepared for Alexander Flick using materials collected by the Division of Archives and History; a 1920 book, The New York Hospital in France: Base Hospital No. 9, A.E.F., a historical diary of the New York Hospital Unit during its two years of active service in the war; and a 1920 booklet, Army Ordnance: History of District Offices - New York, a detailed account of the organization, activities, and production (including statistics) of the New York District of the Army Ordnance Department.
Abstract: Researchers may consult Alexander Flick's 10 volume History of the State of New York (1933), available at the New York State Library, for a review of New York's civilian and military efforts in World War I.
Located at the New York State Archives.