Col. Samuel J. Crooks received authority to recruit this regiment; it was organized for a three years' service, November 14, 1861, at Rochester, where Companies A, B, C, D, E, F, I and K were mustered in the United States service November 23d, and Companies G and H November 28, 1861, only ten companies being organized; Company L having been consolidated into Company G and Company M merged into H, November 14, 1861. A number of the enlisted men of Company K were in December, 1861, transferred to other companies of the regiment, and March 8, 1862, the remaining men were transferred to the 1st Battalion of Artillery, Companies A, B and D, later 29th, 30th and 32d Batteries. A new Company K and Companies L and M were organized in August, September and October, 1862, and mustered in the United States service at Rochester for three years, September 29th, October 15th and 14th, respectively. At the expiration of the term of service of the regiment, those entitled thereto were, October 29, 1864, ordered to Rochester to be discharged and mustered out, and those remaining were, November 1, 1864, consolidated into a battalion of eight companies and retained in service. In this consolidation Companies A, B, C, D and E retained their letters and organization, Company K became Company F, L became G, and M was designated H; the enlisted men of the original Company F were transferred to Company A; those of original G to Companies B, C, D and M, old; those of original H to D and L, old; those of I to Company E, old. On the 30th of April, 1865, new Companies I, K, L and M were formed of recruits, mustered in for one and two years' service, and the regimental organization again completed.

Eighth Cavalry.—Cols., Samuel J. Crooks, Alfred Gibbs, Benjamin F. Davis, William L. Markell, William H. Benjamin, Edmund M. Pope; Lieut.-Cols., Charles R. Babbitt. William L. Markell, William H. Benjamin, Edmund M. Pope, James Bliss; Majs., Edmund M. Pope. William L. Markell, Caleb Moore, William Downey. William H. Benjamin. James McNair. James Bliss, Harmon P. Burroughs, Albert L. Ford. Hartwell B. Compson. The 8th, known as the Rochester regiment, was recruited by Col. Crooks, and was organized in Rochester on Nov. 14. 1861. It is one of the famous three hundred fighting regiments enumerated by Col. Fox in his Regimental Losses in the Civil War. The members were principally recruited from the counties of Monroe, Ontario, Seneca, Wayne, Orleans, Niagara. Chenango and Oneida. Only ten companies were organized in 1861, and these were mustered into the U. S. service at Rochester, Nov. 23 and 28. 1861, for three years. The original Co. K was transferred to other organizations and a new Co. K was formed in 1862. as were the additional Cos., L and M, which were mustered into the U. S. service at Rochester from Sept. 29 to Oct. 14, for three years. The original members, who had not reenlisted, were ordered to return to Rochester on Oct. 29, 1864, and were there mustered out and discharged. The veterans and recruits were consolidated into a battalion of eight companies on Nov. I, 1864, and remained in service. Four new companies, I, K, L and M, formed of recruits mustered in for one and two years' service, in April, 1865, at the close of the war, increased the organization to the regimental standard once more. It was finally mustered out and honorably discharged on June 27, 1865, at Alexandria, Va., under command of Col. Pope. The regiment left the state, Nov. 29, 1861; was assigned to Banks' corps upon its arrival in Washington; served through the winter in the defenses of the capital; in 1862 it was in the Department of the Shenandoah; the Middle Department with the 8th corps; and from August to December in the 5th brigade of Pleasonton's cavalry division. Army of the Potomac. In Dec, 1862, it was assigned to the ist brigade, same division; in Feb., 1863, to the ist brigade, ist division; in March, 1864, to the 2nd brigade, 3d division; joined the Army of the Shenandoah in Oct., 1864. and returned to the Army of the Potomac in March, 1865. The regiment first came under fire at Winchester in May, 1862, where five dismounted companies were engaged. It distinguished itself during the siege of Harper's Ferry in September by escaping through the besieging lines at night, capturing some of the enemy's trains while on the way. It fought under Pleasonton in the famous cavalry battle of Beverly ford in June, 1863, where it sustained the heaviest loss of any regiment in the field—12 killed, 31 wounded and 7 missing. The gallant Col. Davis was here killed in a personal encounter. At Gettysburg it fought in Gamble's brigade, Buford's division, which opened that historic battle. Its casualties at Gettysburg amounted to 40 killed, wounded and missing. In the subsequent campaigns in Virginia it saw constant hard service, its list of casualties in Oct., 1863, amounting to 48 killed, wounded and missing. In Sheridan's raids and the Shenandoah campaign in 1864, it served in Wilson's division. It was with Wilson in the raid on the Weldon railroad in June, 1864, in which its losses were 117. of whom loi were reported missing. In the final Appomattox campaign it sustained a loss of 31 in killed, wounded and missing, fighting under Gen. Custer. Altogether the 8th participated in over 130 battles and skirmishes and lost by death 13 officers and 92 men, killed in action and mortally wounded; 6 officers and 213 men died of disease, accident and other causes, a total of 19 officers and 305 men, of whom 3 officers and 70 men died in prison. Medals of honor were awarded for distinguished gallantry to Henry H. Bickford, corporal; Hartwell B. Compson, major; Charles A. Goheen, sergeant; William E. Hart, private; Daniel Kelly, sergeant; Andrew Kuder, 2nd lieutenant; John Miller, private; Robert Nevers, 2nd lieutenant; Mortimer A. Read, lieutenant; and Joseph E. Sova, saddler. 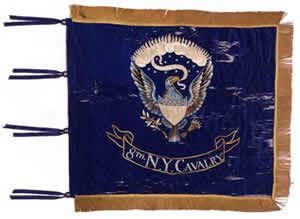 Presented to the 8th Regiment Cavalry, NY Volunteers in May 1864, this silk standard features the arms of the United States embroidered to the center… 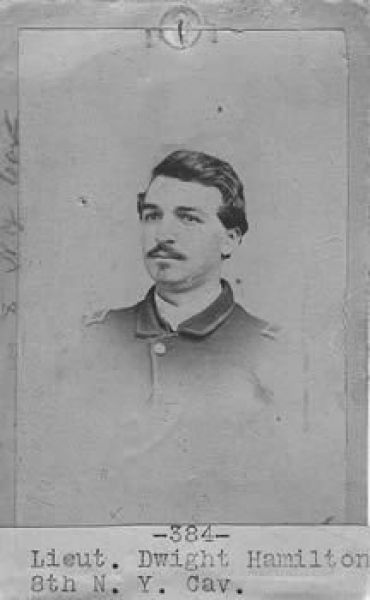 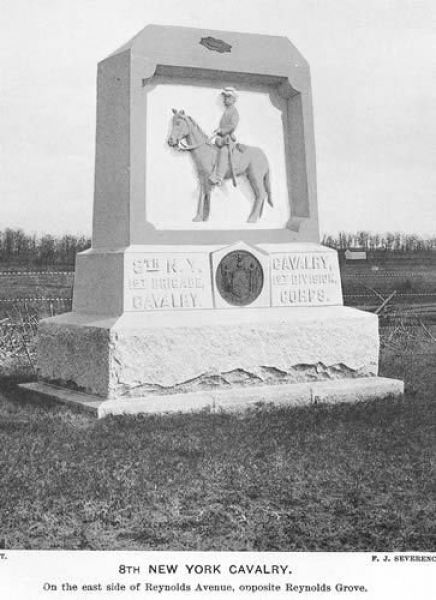 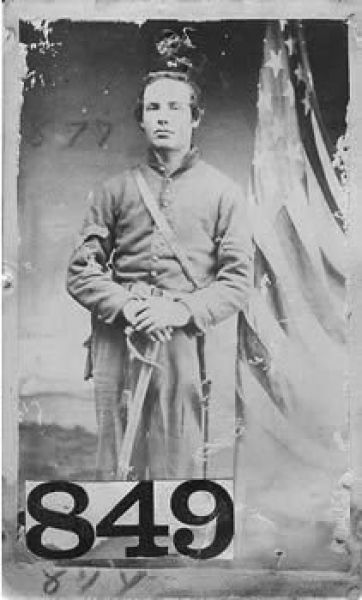 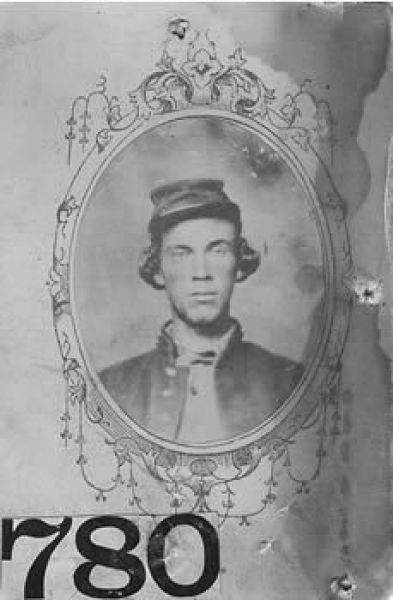 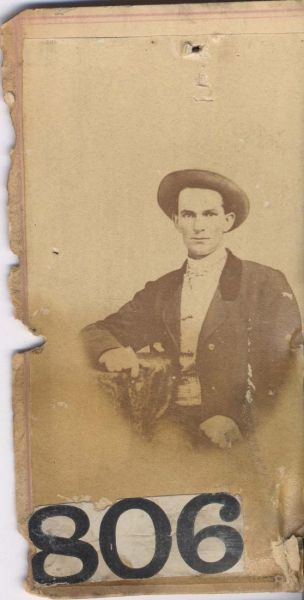 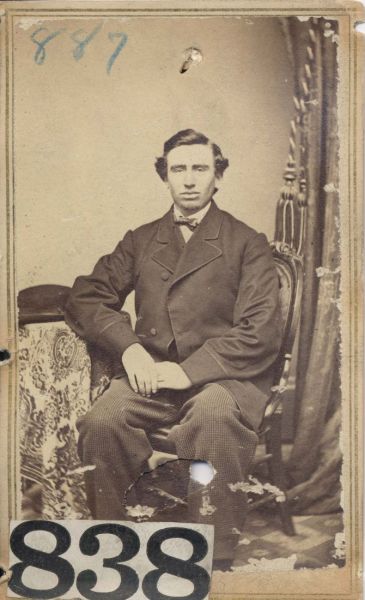 Bell, Thomas. At Harper's ferry, Va., September 14, 1862. How the cavalry escaped out of the toils. A swift night march including a brief history of the Regiment, from its organization to this thrilling night's work, by Thomas Bell, Brevet Major, Eighth New York cavalry. [Brooklyn: 1900].

Huntington - Hooker Papers.
Size: 16 boxes (145 folders, 4 diaries, 3 scrapbooks)
Abstract: Letters to and from the Huntington-Hooker family members and friends, chiefly personal in nature. Included are letters written by Albert Huntington and Horace Hooker during the Civil War, and their Civil War papers and documents.
Located at University of Rochester.
Thank you to Patrick Fultz for pointing out this resource.

Norton, Henry. A sketch of the 8th cavalry, unwritten history of the rebellion, by Henry Norton, a member of Company H, 8th N.Y. cavalry. 1888.

Norton, Henry. Deeds of daring; or, history of the Eighth N.Y. volunteer cavalry, containing a complete record of the battles, skirmishes, marches, etc., that the gallant Eighth New York cavalry participated in, from its organization in November, 1861, to the close of the rebellion in 1865. Compiled and edited by Henry Norton. Norwich, NY: Chenango Telegraph printhouse, 1889.

Owen, Myron. Myron Owen diary, 1864
Myron Owen served with the 8th New York Cavalry Regiment and joined the Army of the Potomac. He served the quartermaster, managing supplies of forage for the horses. He was present at the battles of Harper's Ferry, Antietam, Chancellorsville and Rich Mountain.
Located at University of Iowa. Libraries. Special Collections Dept.

Van Dusen, Charles Theron. Van Dusen Civil War Diary.
A transcription of the diary kept by Charles Theron Van Dusen during the Civil War. The Van Dusen’s are among the earliest families to have settled in New York City.
Available online through the New York Times:
www.nytimes.com/interactive/2011/07/24/nyregion/20110724-van-dusen-civil-war-diary.html?ref=nyregion
Resource submitted by Patrick Fultz.