July 25, 1861, Co1. J. Mansfield Davies received authority from the War Department to recruit a regiment of cavalry. He recruited this regiment and organized it at Scarsdale; it was mustered in the service of the United States for three years, between August 9 and October 8, 1861. It was originally known as the Harris Light Cavalry; the War Department designated it, October 26, 1861, the 7th Regiment of Cavalry in the service of the United States, but when the regiment was turned over to the State as one of the State organizations, it was numbered the 2d Regiment of N. Y. Volunteer Cavalry. At the expiration of its term' of service those entitled thereto were discharged and August 29, 1864, the regiment was consolidated into a battalion of four companies, A, B, C and D, and, composed of veterans and recruits, retained in the service. In September and October, 1864, eight new companies joined, raising the battalion to a regimental organization again; these companies had been recruited for a service of one year.

Second Cavalry.—Cols., J. Mansfield Davies, Judson Kilpatrick, Henry E. Davies, Jr., Otto Harhaus, Walter C. Hull, x\lanson M. Randol; Lieut. -Cols., Judson Kilpatrick, Henry E. Davies, Jr., Otto Harhaus, Edwin M. Cook, Mortimer B. Birdseye; Majs., Henry E. Davies, jr., Edwin F. Cook, Henry Grinton, Alfred N. Duffie, William H. Mallory, John E. Naylor. Walter Clark Hull, Otto Harhaus, Samuel Mclrwin, Mortimer B. Birdseye, Joseph O'Keefe, William R. Mattison, John F. L. V. Danesi, Enos B. Parsons, Andrew S. Glover, William B. Shafer. This regiment was organized at Scarsdale in the summer of 1861 by Col. J. Mansfield Davies, under authority granted him by the war department on July 25. It was called the "Harris light cavalry," in honor of the Hon. Ira Harris, of Albany, then U. S. senator. It was mustered into the U. S. service from Aug. 9 to Oct. 8, 1861, for three years, being designated the 7th regiment of cavalry in the service of the United States, but when it was turned over to the state it was numbered the 2nd N. Y. volunteer cavalry. The 2nd was finely officered and became one of the most famous of the New York cavalry regiments. It was one of the three hundred fighting regiments mentioned by Col. Fox in his '"Regimental Losses in the Civil War," and ranks eighth in the list of mounted regiments which lost the most men killed and fatally wounded in action during the war. Col. Hull was killed at Cedar creek, and Maj. O'Keefe met his death during the final campaign in 1865. The several companies of the 2nd were recruited from New York city, Long island, Rensselaer and Washington counties, with two from Hartford, Conn., three New York Regiments 183 from Indiana, and one (partly) from Pennsylvania and New Jersey. The eight companies raised in 1864, were recruited principally from Cortland and Onondaga counties and were enlisted for one year only. The term of service of the original members expired in Sept., 1864, and these were mustered out and returned home, except about 350 who remained in the field, composed of recruits and reenlisted veterans. They were consolidated into a battalion of four companies. A, B, C and D, and the eight companies raised in 1864 were united with the battalion, raising it again to a full regiment. The regiment left the state in Sept. and Oct., 1861, and originally served with McDowell's division. Army of the Potomac. While on Pope's campaign in Aug., 1862, the 2nd lost 11 killed, 19 wounded and 45 captured or missing, a total of 83. It again suffered heavily in June, 1863, while serving with the 2nd brigade, 2nd cavalry division (Gregg's), Army of the Potomac at Beverly ford, where its casualties were 39 killed, wounded and missing. In the cavalry action at Aldie, Va., the same month, it lost 50 in killed, wounded and missing; at Liberty mills in September, its casualties were 87 killed, wounded and missing, and at Buckland mills, in October it met with a loss of 59 killed, wounded and missing. As a part of Wilson's division, afterwards Custer's, it saw much hard service in 1863-64; it participated in Kilpatrick's daring raid in March. 1864, within the defenses of Richmond, when the regiment approached within a mile and a half of the city. Maj. Cook was captured at this time and put in irons. The regiment again lost heavily during Wilson's raid to the South Side and Danville railroads in June, 1864, when its casualties amounted to 47 killed, wounded and missing. The 2nd served with the cavalry in the Army of the Shenandoah from Oct., 1864, to March, 1865, and with the Army of the Potomac during the final campaign up to the surrender of Lee at Appomattox. The regiment was mustered out June 23, 1865, at Alexandria, Va. Three of its six colonels rose to high rank for conspicuous gallantry. Col. Kilpatrick became a bvt. major-general; Col. Henry E. Davies. Jr., rose to be a major-general, and Col. Randol was appointed bvt. brigadier-general. Six members of the regiment were awarded medals of honor by Congress, viz.: Lieut. James H. Gribben, Sergt. Ivers S. Calkins, Corps. Irvin C. Payne and John F. Benjamin, and Pvts. William I. Brewer and Frank Miller. The total enrollment of the regiment was 2.528, of whom 9 ofiicers and 112 men were killed and died of wounds; 2 officers and 234 men died of disease, accidents, in prison, etc.; 20 officers and 22(i were wounded and recovered; and 14 officers and 545 men were reported missing. The regiment served almost entirely in Virginia and Maryland and took part in about 175 battles and skirmishes. It was a credit to the state which sent it forth, and few regiments in the service displayed more conspicuous gallantry and efficiency. 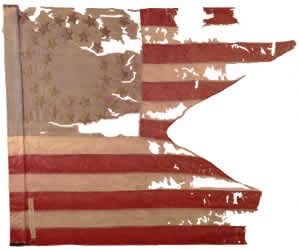 Silk swallowtailed guidon in the 'stars and stripes' pattern as prescribed in General Order No. 4, Headquarters of the U.S. Army, dated 18 January… 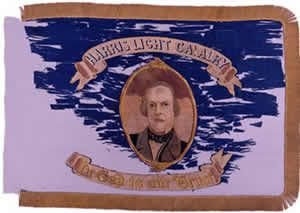 The 2nd Regiment Cavalry, recruited and organized at Scarsdale, mustered into service for three years between August 9 and October 8, 1861. Originally… 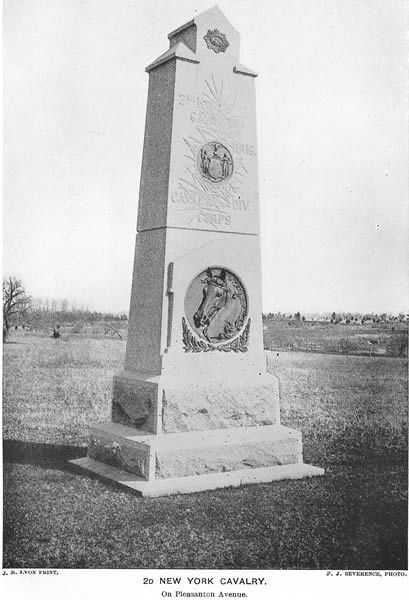 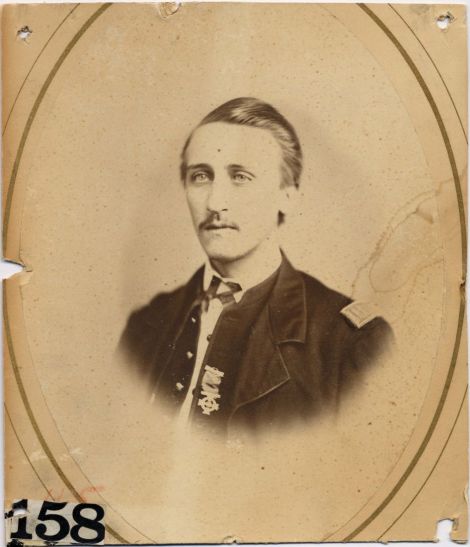 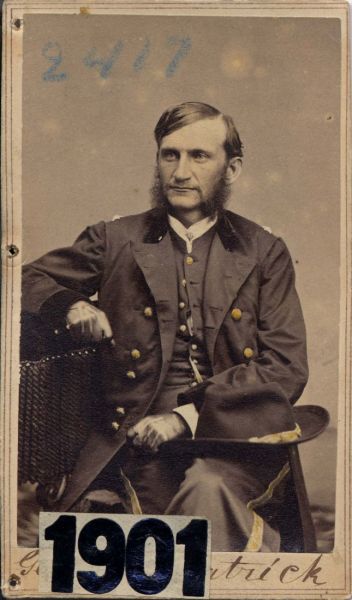 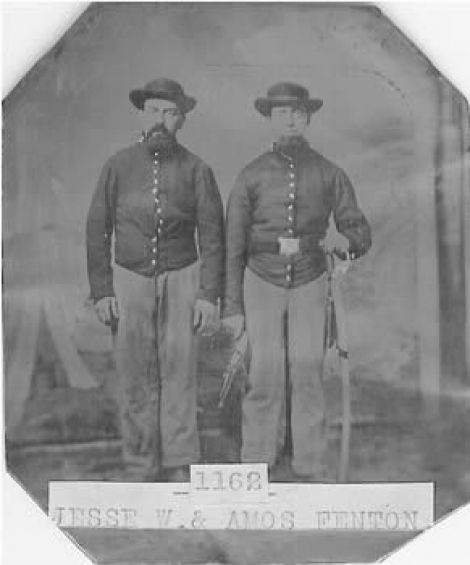 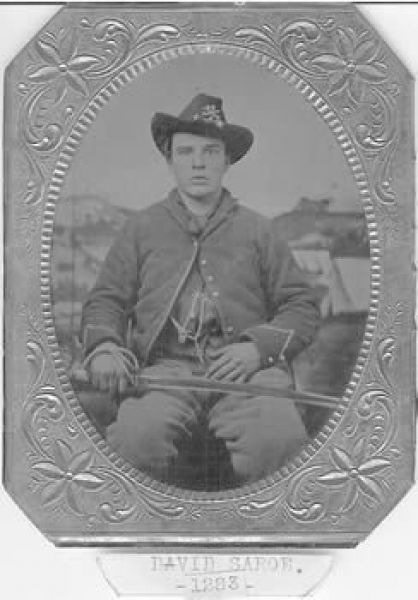 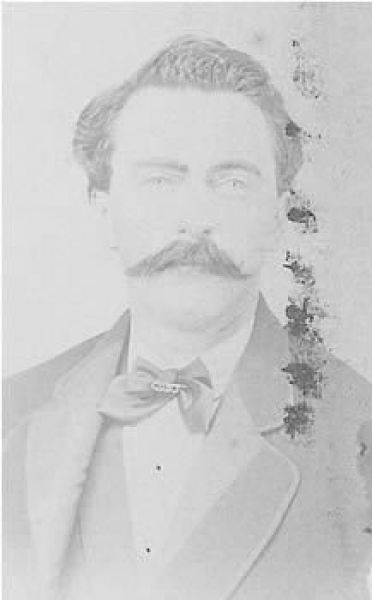 De Peyster, John Watts. Corporal Casey; or, the history of a cavalry regiment. Citizen and round table. New York: 1870.

Dyer, Frederick H. A Compendium of the War of the Rebellion: Compiled and Arranged from the Official Records of the Federal and Confederate Armies Reports of the Adjutant Generals of the Several States, the Army Registers and other Reliable Documents and Sources. The Dyer Publishing Company, 1908.

Eaton, Hervey E. Letters, 1865.
17 pages.
Letters, March-May 1865, from Hervey E. Eaton of Company H, 2nd New York Cavalry, to his mother Emily Goodrich of Fayetteville, Onondaga County, New York, consisting of letter, 28 March 1865, letting his mother know that he has reached City Point, Virginia, where his regiment is joining the Army of the Potomac, informing her that he was part of the “great raid” by Philip Sheridan’s (1831-1888) troops; letter, 29 March 1865, sending news and a photograph (not included); letter, 26 April 1865, stating that Sheridan had taken some of the cavalry to North Carolina, but his regiment has remained behind and having a “soft thing” in camp life, informing her that he is acting quartermaster of the regiment, telling her he has sent home items, and providing personal news; letter, 7 May 1865, containing personal news and asking about news from home; and letter, 15 May 1865, informing her that his regiment may be mustered out soon as it has nothing to do since the war ended.
Accession 38474. Located at the Library of Virginia in Richmond, Virginia.
Thank you to Ed Worman for pointing out this resource.
Glazier, Willard Worcester. Battles for the Union, comprising descriptions of many of the most stubbornly contested battles in the War of the great rebellion, together with incidents and reminiscences of the camp, the march, and the skirmish line. Embracing a record of the privations, heroic deeds, and glorious triumphs of the soldiers of the Republic, by Willard Glazier. Hartford: Dustin, Gilman & co., 1875.407 p., illus.

Glazier, Willard Worcester. The capture, the prison pen, and the escape, giving a complete history of prison life in the South, principally at Richmond, Danville, Macon, Savannah, Charleston, Columbia, Belle isle, Millin, Salisbury, and Andersonville, describing the arrival of prisoners, and plans of escape, together with numerous and varied incidents and anecdotes of prison life. Embracing, also, the adventures of the author's escape from Columbia, South Carolina, his recapture, subsequent escape, recapture, trial as a spy, and his final and successful escape from Sylvania, Georgia, by Captain Willard Worcester Glazier. To which is added an Appendix, containing the name, rank, regiment, and post office address of prisoners. New York: R. H. Ferguson, & co., 1870. 446 p., illus.

Glazier, Willard W. The capture, the prison pen, and the escape, giving an account of prison life in the South, principally at Richmond, Danville, Macon, Savannah, Charleston, Columbia, Millin, Salisbury, and Andersonville: describing the arrival of prisoners, plans of escape, with incidents and anecdotes of prison life; embracing, also, the adventures of an escape from Columbia, S.C., recapture, trial as a spy, and final escape from Sylvania, Georgia. J. Munsell, 1866.

Items in the museum catalog are in bold.