Sixth Independent Battery.—Capts., Thomas W. Bunting, Walter M. Bramhall, Joseph W. Martin, Moses P. Clark. This battery, recruited at Rahway, N. J., and organized in New York city as the artillery company (K) of the 9th militia, later 83d N. Y. infantry, was mustered into the U. S. service June 15, 1861, for a term of three years. It left the state the next day and served with its regiment until Aug. 25, when it was detached, and in December, was designated the 6th battery. In July, 1864, the men of the loth battery were transferred to it. The 6th saw a large amount of active service, participating in over 40 battles and skirmishes. In 1861 it was active at Pritchard's mill. Point of Rocks, Bolivar heights and Ball's Bluff; in 1862, with the 3d corps, it took part in the Peninsular campaign; in 1863, attached to the 1st brigade. Horse artillery, 2nd cavalry division, it took part in the Chancellorsville, Gettysburg and Virginia campaigns, ending with Mine Run; in 1864, with the same command, it fought through the Wilderness campaign and was then ordered into the defenses of Washington. In Oct., 1864, it was engaged with the Army of the Shenandoah at Tom's brook. Cedar creek, and near Newtown, Va. The battery continued in the service as a veteran organization after its term expired and was finally mustered out on July 8, 1865, at Hart's island, N. Y. harbor, commanded by Capt. Clark. During its term of service it lost 8 men killed and mortally wounded, and 9 men who died of disease and other causes. 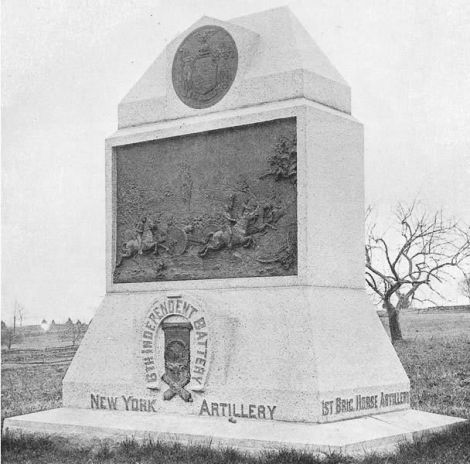 Bilby, Joseph G. New Jersey Goes to War: Biographies of 150 New Jerseyans Caught Up in the Struggle of the Civil War, Including Soldiers, Civilians, Men, Women, Heroes, Scoundrels, and a Heroic Horse. Wood-Ridge, NJ: New Jersey Civil War Heritage Association, 2010.
Thank you to Steve Glazer for pointing out this resource.