November I, 1861, Col. T. D, Doubleday received authority to recruit a regiment of heavy artillery. This regiment, originally known as Doubleday's Heavy Artillery, was designated the First Heavy Artillery January 27, 1862; and the Fourth Regiment of Artillery, February 8, 1862. Two companies intended for the United States Lancers were attached to it. It was organized at New York city, and the companies were mustered in the service of the United States for three years, at Port Richmond, S. I., A and B in November, 1861; C in December, 1861; D, G and H in January, 1862; and E and F in February, 1862, eight companies being organized only. Company G was consolidated into Company H, February 8, 1862, before leaving the State; a new Company G joined the regiment in October, 1862, at Washington, D. C., where it was mustered in the United States service for three years, October 25, 1862. July 25, 1863, orders of the War Department attached the four companies of the 11th Artillery, A, B, C and D, to the 4th Regiment as Companies I, K, L and M, respectively, and these companies joined the regiment October 16, 1863, completing the regimental organization. At the expiration of the term of service of the original seven companies, the men entitled thereto were discharged and the companies retained in the service, B and D being reorganized from recruits joining the regiment at the time. June 5, 1865, the enlisted men of Companies G, H, I and K, 8th Artillery, of the 111th, 125th and 126th Infantry, not mustered out with their regiments, joined this regiment by transfer.

Fourth Artillery (Heavy).—Cols., Thomas D. Doubleday, Gustavus A. De Russy, Henry H. Hall, John C. Tidball; Lieut.-Cols., Henry H. Hall, Thomas Allcock; Majs., Thomas AUcock, Thomas D. Sears, Seward F. Gould, Ulysses D. Doubleday, Edward F. Young, Frank Williams, Derrick F. Hamlink, William Arthur, Henry T. Lee, Henry E. Richmond. This regiment, from the state at large, and originally known as Doubleday's heavy artillery, was organized at New York city. Only eight companies were at first organized, which were mustered into the U. S. service at Port Richmond, L. I., between Nov., 1861, and Feb., 1862, for three years. Before it left the state Co. G was consolidated into Co. H, and a new Co. G joined the regiment at Washington, D. C, where it was mustered in on Oct. 25, 1862. The nth artillery battalion was assigned to this regiment on June 21, 1863, as Cos. I, K, L and M, completing the regimental organization. Companies G, H, I and K of the 8th artillery, 176 men of the 126th and 242 of the 111th infantry were transferred to this regiment in June, 1865. The members of the original seven companies, except veterans reenlisted, were discharged on the expiration of their term of service, and the companies consisting of veterans and recruits, were retained in service. The regiment—seven companies—left the state on Feb. 10, 1862, and served as heavy artillery and infantry in the defenses of Washington until 1864. It then joined the Army of the Potomac at the beginning of the Wilderness campaign and took part in every important battle leading up to the final surrender at Appomattox, being attached most of the time to the 2nd corps. In Feb., 1865, it took the place of the 7th N. Y. heavy artillery, as a part of the famous Irish brigade. It gained a splendid reputation as a hard fighting organization, being actively engaged at the Wilderness, Spottsylvania, the North Anna, Totopotomy, Cold Harbor, assaults on Petersburg, Weldon railroad. Deep Bottom, Strawberry Plains, Reams' station, Amelia Springs, Deatonsville road, Farmville and Appomattox Court House. At Spottsylvania its casualties were 81 killed, wounded and missing; in the first assault on Petersburg, it lost 104 killed and wounded, and at Reams' station it had 17 killed, 2,2 wounded and 326 missing, the greatest loss of any regiment engaged. In the Appomattox campaign its losses in killed and wounded aggregated 102. It suffered a total loss by death during service of 8 officers and 117 men, killed and mortally wounded; 4 officers and 335 men died of disease and other causes; and 97 died in Confederate prisons. After the close of the war the regiment served in De Russy's division, 22nd corps, in garrison duty, until finally mustered out at Washington, D. C, under Col. Tidball, Sept. 26, 1865. 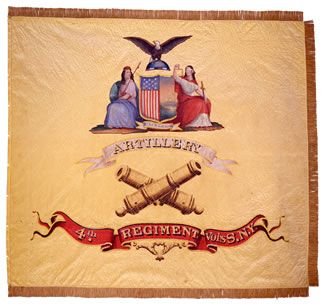 This yellow, silk regimental color carried by the 4th Regiment Artillery, New York Volunteers with painted Arms of the State of New York and crossed… 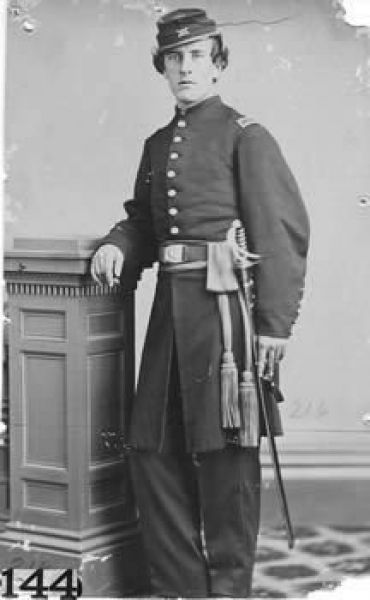 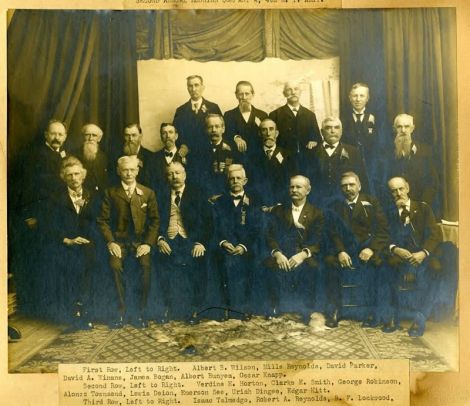 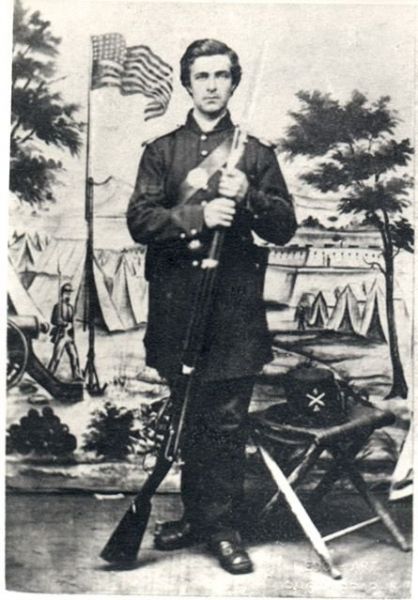 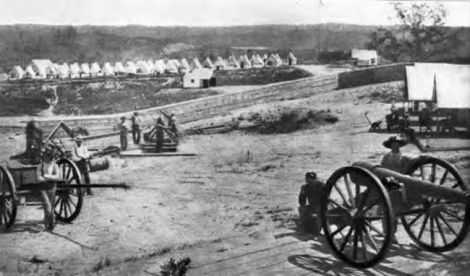 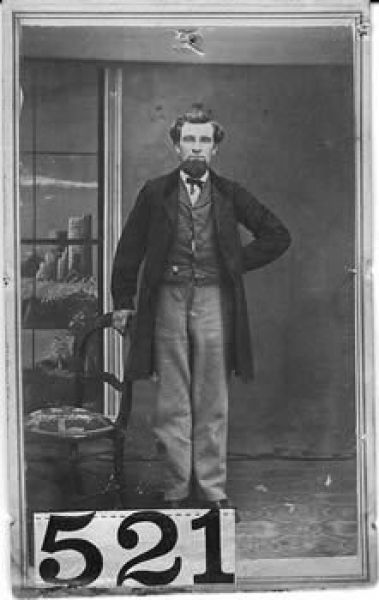 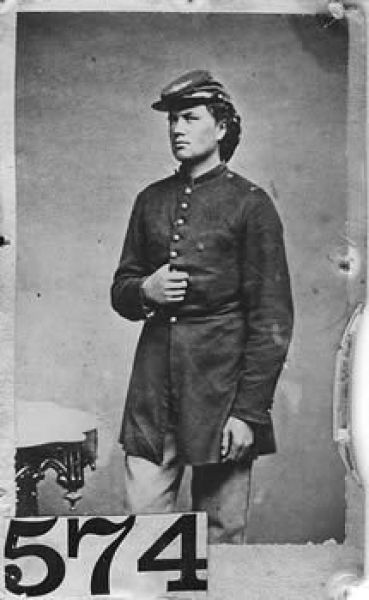 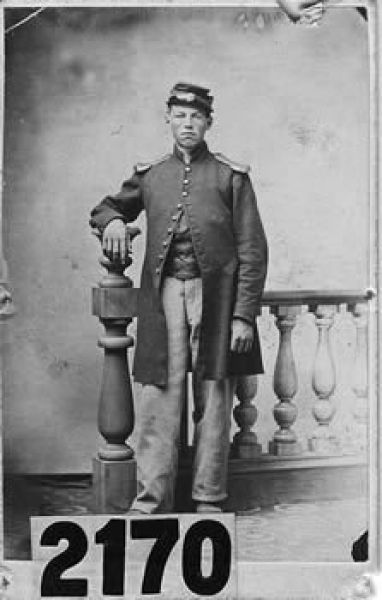 Gray, William Cullen Bryant. Memorabilia, ca. 1862-1962.
Abstract: Collection consists of typescripts of journals kept by Gray while an aide-de-camp to General Abner Doubleday of the 4th New York Heavy Artillery Regiment, 1862. Also included is correspondence from William Gray Harmon, owner of his great-grandfather's "Journal," concerning use of an excerpt by City College for a centennial celebration of the Emancipation Proclamation, 1962.
Located at the New York State Library.

Hill, family; Hill, Rowena; Hill, Clayton L.; Hill, Ebenezer. Papers, 1802-1865.
3 folders (48 items).
Abstract: Indentures to Ebenezer Hill for land in Onondaga County, N.Y., 1802 and 1830; letters from and to Clayton L. Hill while he served as an assistant surgeon with the 4th N.Y. Heavy Artillery in the Civil War, 1865; and diary and letters to friends and family from Clayton's cousin Rowena Hill, describing her experiences as teacher to freed slaves in Norfolk, Va., 1863-1864.
Originals located at the Buffalo & Erie County Historical Society Library

Lee, Henry Thomas. The last campaign of the Army of the Potomac from a "mudcrusher's" point of view, a paper prepared and read before the California commandery of the Military order of the loyal legion of the United States, March 23, 1893, by Henry T. Lee, Maj. 4th N.Y. heavy art. [San Francisco, Co-operative print, co., 1893].

Penny, family. Civil War letters, 1861-1865.
Abstract: The Penny Papers, consisting of 208 letters, cover the period 1861-1864, and deal with the experiences and daily life of a soldier in the Civil War. Archibald and Alfred Penny were the sons of Elijah and Jane Penny, Towners Station (now Towners) Putnam County, New York.
Elijah Penny was a corporal in the 4th Artillery, New York Volunteers. He was an older man and was therefore given more responsibility than that which rates a corporal. Oftentimes, his duties took him into the hospital corps, thus giving rise to his being called 'doctor'. His letters, written to his wife, related mostly to life in camp, concern for his family, and his health. There are, however, a few references to events both political and military. He refers to Governor Seymour and "his sachems" stirring up an insurrection in the north (probably referring to the draft riots of 1863). His letters are often full of despair and he remarks that perhaps the leaders intend to extend the war period indefinitely, killing a few thousand now and then to keep up the excitement. He also expounds his feeling toward bounty money as unpatriotic.
The defenses of Washington against the "Merrimac" are described when it was expected to sail up the Potomac in March of 1862. Significantly, this letter was written the day before the "Merrimac" met the "Monitor" on March 17, 1862. General disgust and distaste for the northern army and its blunders are felt by him. He thinks very little of the 4th Artillery, New York Volunteers. In several of his letters, the trial of a Captain Tom Sears is mentioned. Colonel Doubleday's trial is also mentioned, but little is said. In the end, the colonel is restored to his command on December 15, 1862. Elijah's two sons were in the army and much is said about them to his wife. When Alfred is home sick and finally succumbs, his letters are tender and sympathetic.
Alfred Penny was a member of Company E, 2d Regiment, New York State Volunteers and the secretary of the company. His regiment seems never to have left the Washington area, being encamped at Powell, Draper, Poolsville and other places, besides Washington itself. While at Poolsville the death rate from climate and location was high but after the building of huts and the installation of fires and bunks, it went down. On January 10, 1861, when it was encamped across a river from the 21st Mississippi Rifles, Alfred Penny says that they could have shot at each other but rather, they were on the most amicable of terms. Very near this rebel encampment, at Ball's Bluff, was a regiment of Seminole Indians. Alfred's letters, generally signed A.C., are mostly of camp life, trips taken and places seen.
Archibald Penny was working in New York City when the 9th Regiment, New York State militia was being formed there, and wrote to his father seeking paternal consent to enlist. Having received it, he enlisted in Company F. He was sent to Washington, D.C., and from there to the surrounding towns in Maryland and Virginia. At Harper's Ferry, he found that the rebel forces were carrying on a scorched earth policy, having burned the city and most of the countryside. At times, Archibald's letters are factual, giving the strength of the Army of the Potomac, the 9th Regiment, and their position and duties. He often mentions the type of food and the quantity. He records the number of pounds a soldier has to carry as 48 and enumerates the specific articles.
Frequently discussed are camp life and the number of miles marched each day (i.e. marching day). Archibald mentions no battles, as he says that all the news can be read in the "New York Tribune".
Located at the New York State Library.