Colonel Louis Schirmer was authorized, May 29, 1863, to recruit this regiment. It was organized in New York city. September 30, 1863, the 3d Battalion of Artillery was transferred to it, forming Companies A, B, C, D and E; June 22, 1863, a company and other men enlisted for the I2th Artillery were assigned to the regiment as Company F; and October 14, 1863, the 2d. Battery, reorganizing, and the 34th Battery, Capt. H. Jahn, organizing, were also transferred to it. The companies were mustered in the service of the United States for three years, A, B, C, D and E at New York city, between October 14 and December 19, 1861; at Staten Island F June 19, 1863; at Fort Lyon, Va., G, H and I August 27; K September 18; and L December 11, 1863; at Goshen, Company M, of which the Raines Artillery formed part, January 30, 1864. At the expiration of the term of service of Companies A to E, the men entitled thereto were discharged and the companies continued in service.
The companies were recruited principally: A, C, D, E, F, H and I at New York city; B at New York city and Philadelphia, Pa.; G at New York city and Buffalo; K and L at New York city, Catskill, Troy and Buffalo; and M at Monroe, New Windsor, Liberty, Mamakating, Crawford, Warwick, Montgomery, Wallkill, Newburgh, Goshen, Fremont, Cohecton, Callicoon, Bethel, Deer Park and Cornwall.
Companies A to E, when assigned to the regiment, were on duty at Fort Lyons, and the other companies were forwarded to that point as soon as organized. The regiment served as infantry and heavy artillery at Fort Lyons, Va.; in the 2d, and later in the 4th, Brigade, DeRussy's Division, 22d Corps, from November, 1863; in the Artillery Reserve, Army of the Potomac, from March, 1864; in the 1st Brigade, Artillery Reserve, Army of the Potomac, from April, 1864; the 2d Battalion with the Artillery Park, Army of the Potomac, rand the 1st and 3d Battalions in the Heavy Artillery Brigade, 5th Corps, Army of the Potomac, from May 13, 1864; in the 3d Division, 5th Corps, from May 30,1864; in the 3d Brigade, 2d Division, 5th Corps, from June 2, 1864; Company F in the Artillery Reserve, Army of the Potomac, from June to December, 1864; and the regiment in the 1st Brigade, 2d Division, ,5th Corps, from August, 1864; Company M in the Artillery Brigade, 5th Corps, from January, 1865; and the regiment in the 4th Brigade, DeRussy's Division, 22d Corps, from June, 1865.
The regiment, commanded by Maj. Julius Dieckman, was honorably discharged and mustered out August 22, 1865, at Washington, D. C., having, during its service, lost by •death, killed in action, 2 officers, 81 enlisted men; of wounds received in action, 6 officers, 67 enlisted men; of disease and other causes, 3 officers, 225 enlisted men; total, 11 officers, 373 enlisted men; aggregate, 384, of whom 63 enlisted men died in the hands of the enemy. The large number of men reported " accidentally killed " is principally caused by the explosion of a magazine at Fort Lyons, Va., June 9, 1863.

Fifteenth Artillery (Heavy).—Cols., Louis Schirmer, Michael Weidrich; Lieut.-Cols., Michael Weidrich, Louis Eiche; Majs., Emil Duysing, William D. Dickey, Leander Shamberger, Louis Eiche, Calvin Shaffer. Julius Dieckman. This fine German regiment was organized at New York city, the members being principally recruited in the counties of New York, Orange, and Sullivan. The 3d battalion of artillery, recruited in New York city in 1861, and which had been performing garrison duty in the defenses of Washington, was transferred to the 15th as Cos. A, B, C, D and E on Sept. 30, 1863; on June 23, 1863, a company enlisted for the 12th N. Y. artillery was assigned to the regiment as Co. F; and Oct. 14, 1863, the 2nd and 34th batteries were likewise transferred to it. The companies were mustered into the U. S. service for three years as follows: A, B, C, D and E at New York city, between Oct. 14 and Dec. 19, 1861; and the remaining companies from Aug. 2T, 1863, to Jan. 30, 1864. The original members of Co. A to E were mustered out on the expiration of their term of enlistment and the remainder of the regiment continued in service. When assigned to the regiment, Cos. A to E were on duty at Fort Lyon, Va., and the other companies joined them there as soon as organized. The regiment performed garrison duty until March, 1864, when it joined the Army of the Potomac at the front, where it was assigned to the 5th corps, to which it was attached throughout the remainder of the war, most of the time assigned to Ayres' (2nd) division. The regiment took part in the engagements of the Wilderness, Spottsylvania, the North Anna, Totopotomy, Cold Harbor, White Oak swamp, first assault on Petersburg, Weldon railroad. Poplar Grove Church, Hicksford raid, Hatcher's run, and the Appomattox campaign, including actions at Five Forks, the fall of Petersburg and Appomattox Court House. Throughout this series of battles it was conspicuous for its steadiness and bravery, and sustained severe losses. At Spottsylvania its casualties were 160 in killed, wounded and missing, among the mortally wounded being the gallant Maj. Shamberger. In the assault on the works of Petersburg in June, 1864, it lost 85 killed and wounded; at the Weldon railroad, 14 killed, 75 wounded and 5 missing; at White Oak road, 18 killed, 81 wounded and 11 missing, among the mortally wounded being Maj. Duysing. The regiment also lost heavily in the trenches before Petersburg from the constant and deadly firing which prevailed there, having 83 men killed, wounded and missing from this source. It lost by death during service 8 officers and 148 men, killed and mortally wounded; 5 officers and 225 men died of disease and other causes, a total of 13 officers and 373 men, of whom 63 men died in the hands of the enemy. A number of men were accidentally killed by the explosion of a magazine at Fort Lyon, Va., June 9, 1863. Under the command of Maj. Dieckman, the regiment was mustered out at Washington, D. C, Aug. 22, 1865. 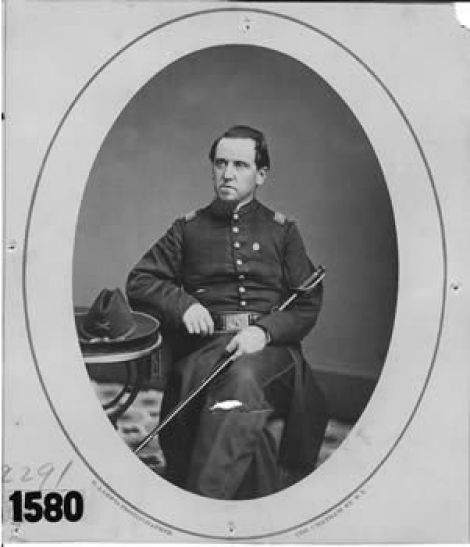 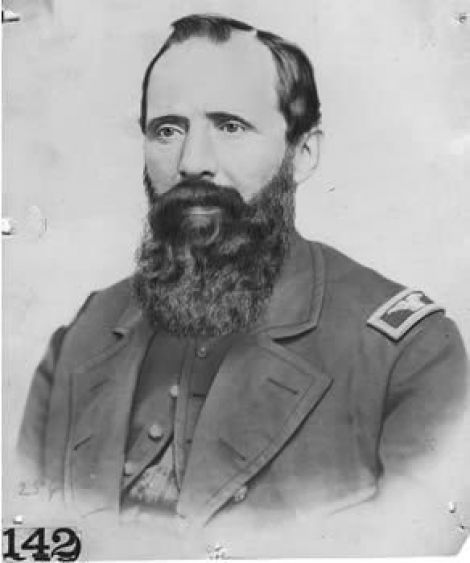 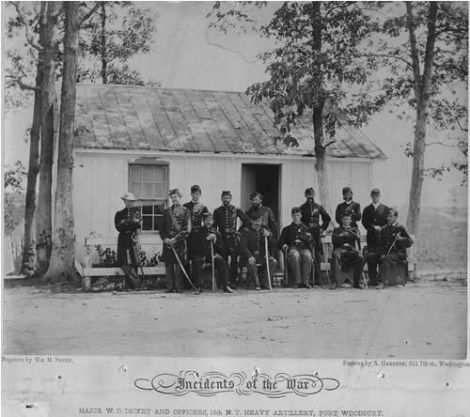 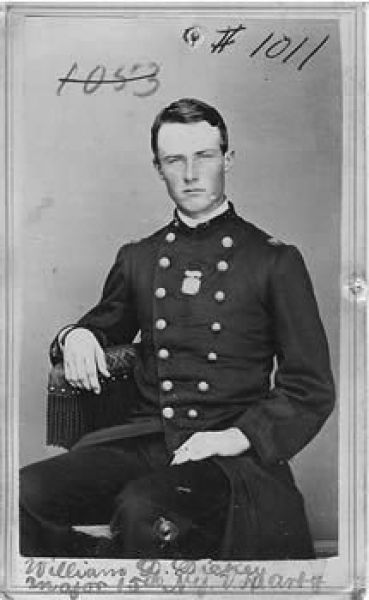 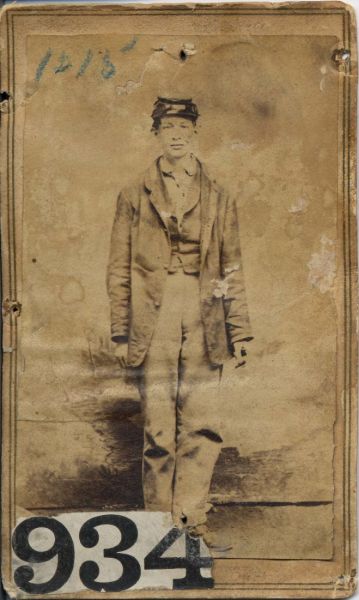 Come, Stephen F. Letters (1862-1865).
23 items.
This group of letters, sent to Come's wife, comment on the various infirmities that kept him from active duty. Also included are letters written by Joseph Bruley of the 30th N.Y. Infantry, Company K, who discusses being taken prisoner during the battle of Fredericksburg, and subsequent imprisonment and escape from Libby Prison.
Located at the New York State Library Manuscripts and Special Collections. Collection Call Number: 20174.
Thank you to Edward Altemos for pointing out this resource.

Thank you to Ron Mansfield for finding this article.

Matteson, W. Carlos. Matteson Collection, 1864-1865.
Personal Letters 1840-1882.
Twenty letters sent to Matteson's family in Buffalo, NY while serving with Company 'M", 15th New York Heavy Artillery Regiment. The Matteson material recalls a number of engagements, including the Wilderness, the Assault on Petersburg, Weldon Railroad and daily life in the trenches with the Fifteenth New York Heavy Artillery near Petersburg, Va.
Located at the Buffalo History Museum, Buffalo, NY.
Thank you to Ron Mansfield for pointing out this resource.

Quire, Henry T. Collection (1861-1865).
8p.
This compilation of photocopied service records and other official documents relate to Quire's application for a veteran's pension.
Located at the New York State Library Manuscripts and Special Collections. Collection Call Number: 18952.
Thank you to Edward Altemos for pointing out this resource.

A Reminiscence. The Participation of the 15th Regiment New York Heavy Artillery in the Glorious Struggle of the United States of North America, During the year 1864, and until the surrender of the Rebel Army under General R. E. Lee. Washington. D.C., 1865. 30 pages, W. Koch, printer.
Submitted by Ron Mansfield

Riddle, Albert Gallatin. Arguments for defence in the case of the United States vs. Colonel Louis Schirmer, 15th New York heavy artillery, tried before General court-martial ... at the City of Washington, commencing March 20, and terminating May 31. A. G. Riddle and S. Wolf, counsel for defendant. Washington, D. C., 1865. 71 p.

Van Vleck, Jacob. Letters (1864-1865).
25 items.
Collection Call Number: 15433.
Letters sent to Van Vleck's family regarding his experiences of military life. He mentions his involvement in engagements between Union and Confederate troops at several places in the vicinity of Richmond, Virginia.
Located at the New York State Library Manuscripts and Special Collections.
Thank you to Ron Mansfield for finding this collection.