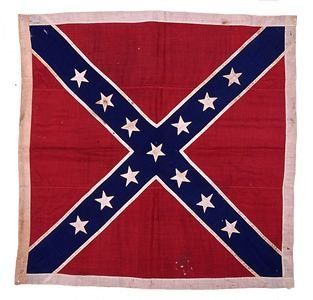 On April 18, 1863, near Little Washington, North Carolina, detachments from Companies A and E, 3rd Regiment Cavalry, New York Volunteers captured a battle flag carried by the 7th Confederate Cavalry. Major General John Foster commended the men from the 3rd Cavalry, NY Volunteers in General Orders No. 68 dated April 29, 1863. The order states, in part, "The battle-flag of the Seventh Confederate (Claiborne) Cavalry, which was captured from the enemy in the gallant charge by a detachment of Companies A and E against superior numbers near Little Washington on the 18th day of April instant, is presented to the regiment as a distinguishing mark of the favor and appreciation in which the gallant services of this command are held." The Army of Northern Virginia (ANV) battle flag seen here, identified in museum records as the 7th Confederate Cavalry's flag received by the Bureau of Military Statistics by February 1864, most closely matches the third bunting issue and includes 13 cotton appliquéd stars, each measuring 3.25-inches in diameter, spaced about 6-inches apart.