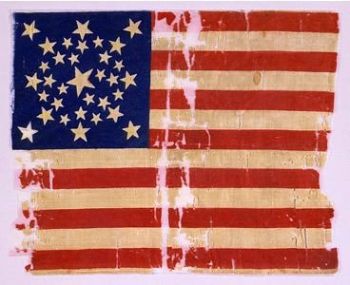 Late in the afternoon on April 19, 1861, the 7th Regiment, New York State Militia formed up in Lafayette Place in New York City, wheeled into column, and began a march down Broadway destined for the nation’s capital. The inspirational journey, amid a dense crowd that had gathered along flag-lined Broadway, symbolized the patriotic spirit that emboldened the city and state. According to the April 20, 1861 edition of the New York Times, the departure of the 7th Regiment for Washington, D.C. on April 19, 1861, "... was one of the most exciting ever known, and cannot fail to be remembered during the lifetime of all who witnessed it." A citizen among the revelers, perhaps a child, reportedly waved the small silk United States flag seen here during the regiment's march down Broadway. The flag includes 33 printed stars, the official star count in April 1861, arranged in a radiating circular pattern complete with a large center star that probably recognized the 33rd state, Oregon.