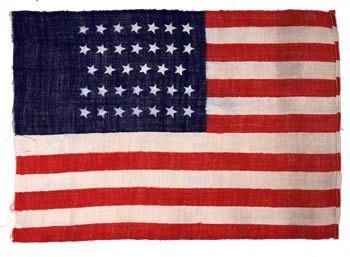 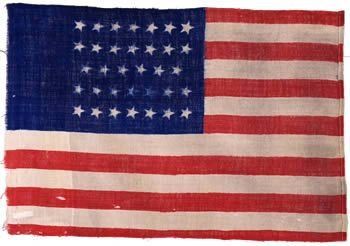 The 98th Regiment, under Colonel William Dutton, organized at Albany in February 1862 when two incomplete units, the Lyons and Malone regiments, consolidated. The two printed wool camp colors in the US National pattern seen here conform to General Order No. 4, Headquarters of the U.S. Army, dated 18 January 1862. The stars are arranged in five horizontal rows with seven stars in each of the upper two and bottom two rows while the indented middle row includes only six stars. Each flag is a single piece of fabric. When originally made, the fabric at the hoist edge was rolled over to create a staff sleeve. The flags were sandwiched between two layers of nylon net in 1972. The netting process included removing the original stitching for the sleeve, applying the net, and then re-stitching the sleeve seam. In 2002 State Parks textile conservators removed the 1972 netting treatment including the stitching done in 1972 to recreate the staff sleeve. Both flags now lie flat without sleeves.