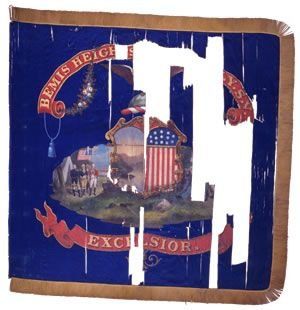 The “Sons of Saratoga,” citizens from Saratoga living in New York City, presented this Regimental Color to the 77th New York Volunteers on November 29, 1861, at City Hall in New York City. Made by Tiffany & Co., the flag features painted Revolutionary War battle scenes, including British General John Burgoyne’s surrender at Saratoga, October 1777. The “Bemis Heights Battalion” carried the inspirational color until July 1863, including at Marye’s Heights, May 3, 1863, where an artillery shell pierced the flag and wounded three men. The painted decorations on the flag include, in the center, the Arms of the State of New York without the female supporters Liberty and Justice. Painted to the left of the Arms, and extant on the flag’s obverse, is an image of General John Burgoyne’s surrender at Saratoga, October 1777. This image features the “stars and stripes” flag adopted by the Continental Congress, June 1777. Painted to the right, and extant on the flag’s reverse, is an image of American soldiers battling under the Continental Grand Union flag, the flag used by the colonials prior to June 1777 with thirteen red and white stripes and the British Grand Union in the canton.