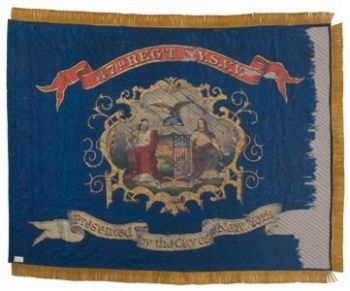 The 47th New York Volunteers, or "Washington Grays," mustered into service for three years on September 14, 1861. When their three-year term expired, those entitled were discharged and the regiment continued in service as "Veteran Volunteers" until mustered out in August 1865. The regiment most likely received this blue silk Regimental Color from the City of New York in April 1865 during the regiment's service as "Veteran Volunteers," as indicated by the "N.Y.S.V.V." painted in the flag's upper red ribbon. The painted flag includes the Arms of the State of New York on one side and the Arms of the City of New York on the other.