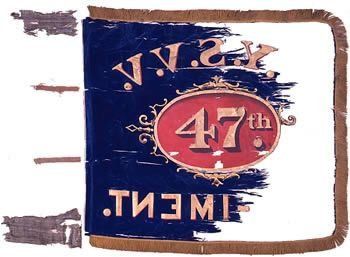 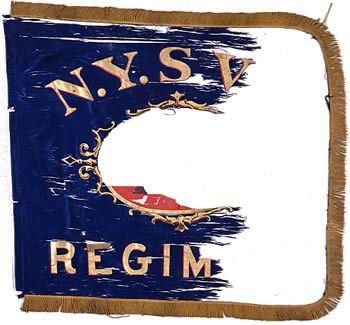 The NYS Battle Flag Collection includes two flank markers carried by the 47th Regiment NY Volunteer Infantry. Recruited principally in New York City and Brooklyn, the 47th NY Volunteers mustered into service for three years on September 14, 1861. When their three-year term expired, those entitled were discharged and the regiment continued in service as “Veteran Volunteers.” Both flags have considerable loss, mostly to the fly edge, and feature the same painted inscriptions. One flag’s inscription reads in reverse on the front and left to right on the reverse, while the other flag’s inscriptions are the exact opposite. Given the size of the letters within each inscription, both flags are believed to have read “N.Y.S.V.V.” along the top and would date to the regiment’s service after September 1864 as “Veteran Volunteers.”