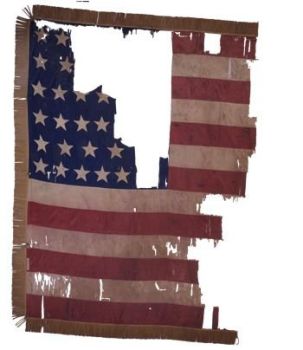 In April 1861, one hundred men left Angelica, Allegany County, for Elmira, New York, to eventually muster into service as Company I, 27th New York Volunteers. En route, the men stopped at Villa Belvidere, home of siblings Richard and Elizabeth Church in Belvidere, New York. There, Elizabeth Church, great granddaughter of noted Revolutionary War patriot Philip Schuyler, presented the men with this silk national color. The flag became the official color for the entire regiment, and Company I, the color company, proudly carried the flag for two years. During the Battle of Chancellorsville, Virginia, May 1863, enemy fire tore a star from the flag’s canton. Undaunted, the color bearer, Sergeant Arch Van Ness, retrieved the star and later donated it to New York State when the regiment returned home and deposited the flag into the Battle Flag Collection. This flag is made of red, white, and blue silk with white silk stars reverse appliquéd in the canton. Approximately one-third of the flag is lost, mostly from use on the battlefield and from enemy fire. Years of poor storage, during which the flag remained tightly furled around its staff, caused further damage to the fragile silk. In 2013, State Parks textile conservators gently unfurled the flag, surface cleaned the fabric, and used a controlled amount of humidity to realign the silk.