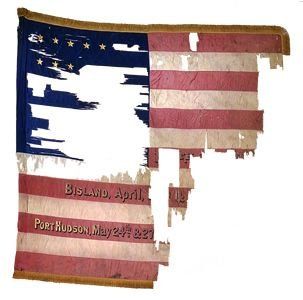 Approximately 40-50% of this silk national color carried by the 114th Regiment NY Volunteer Infantry is lost, mainly from the lower fly quadrant and canton. Fortunately, portions of two painted battle honors remain - Bisland, Louisiana, April 12-13, 1863, and Port Hudson, Louisiana, May 24 and 27, 1863. Only 8 painted stars are extant in the canton from most likely a 35-star pattern. A very small portion of the regiment's numeric designation appears on the center red stripe. The regiment is believed to have carried this flag in battle after the Red River campaign, March 10-May 22, 1864. When four color bearers had fallen on September 19, 1864, at Opequon, Virginia, First Lieutenant Edward Breed reportedly snatched this flag from the ground and rallied the regiment until mortally wounded in the chest.