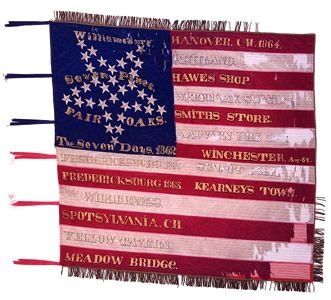 On November 22, 1861, the 7th Regiment Cavalry, NY Volunteers assembled outside the courthouse in Troy, New York where John A. Griswold presented the national flag seen here to the regiment on behalf of the "generous, warm-hearted and patriotic women" of Troy. The silk flag includes 34 embroidered stars in the canton, painted battle honors, and metallic bullion fringe. Reportedly, after the regiment mustered out in March 1862, the flag was carried by the 2nd New Jersey Infantry and the 3rd New Jersey Cavalry until deposited into the NYS Battle Flag Collection on August 22, 1865. In 1968, this flag was sewn between two layers of nylon netting, matching the colors of the flag with different colors of net, and six sets of ties were added to the hoist edge.