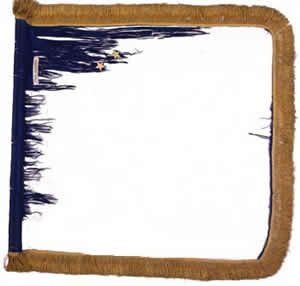 The New York State Battle Flag Collection includes one flag, a standard, carried by the 24th Regiment Cavalry, NY Volunteers. Organized at Auburn and mustered into service for three years between December 1863 and January 1864, the regiment served dismounted until October 1864. According to collection records, the regiment carried this standard while in service dismounted. Only about 15% of the flag remains, including the tassel fringe, the sleeve and the outer portions of the field. Two gold painted stars remain from the painted emblem, most likely from the Arms of the United States.