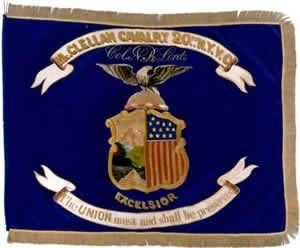 The 20th Regiment Cavalry, or “McClellan Cavalry,” organized at Sackett’s Harbor and mustered into service for three years in September 1863 under Colonel Newton Lord. This embroidered silk standard includes the Arms of the State of New York in the center with the regiment’s nickname, and Colonel Lord’s name along the top. The embroiderer misspelled the colonel’s name as “Lorde.” A familiar Union rallying cry appears along the bottom. In 1961, this flag was sewn between two layers of nylon netting in an effort to preserve it. The 1961 netting did not cover the embroidery so that it could be better seen.