This regiment was organized under Col. Edward W. Serrell at New York city and accepted by the State September 27, 1861. The companies were mustered in the United States service for three years at New York city, A, B, C, D and E October 11, 1861 ; G, K and I December 2, 3 and 13, 1861, respectively; F in January, and H February 19, 1862. The original Company L became the 4th N. Y. Volunteer Battery in October, 1861. In January, 1864, 205 enlisted men of the Enfants Perdus and two officers and forty enlisted men of the 4th N. Y. Volunteer Battery were assigned to the regiment by transfer; Company L was reorganized of men of the 4th Battery and Company M in April, 1864, from recruits in the field. Company M was, however, not fully organized until April, 1865, up to which time the incompleted company was commanded by details of officers of other companies. At the expiration of its term of service the men entitled thereto were discharged and the regiment continued in the service. 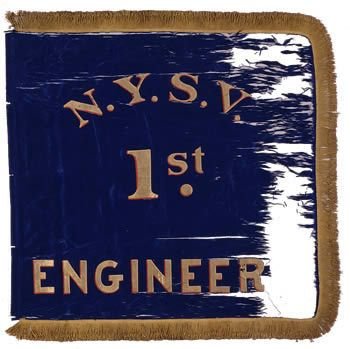 Swift, Jerome. Letter, 31 March 1865.
4 pages.
Letter, 31 March 1865, from Jerome Swift (b. ca. 1845), 1st New York Engineers, at Reams Station, Virginia, to his brother. He writes about his regiment’s long marches around Petersburg and Hatcher’s Run, his duties unloading the dead and wounded from ambulances at Reams Station, the transport of captured prisoners, and the heavy fighting that is taking place.
Accession 42334. Located at the Library of Virginia in Richmond, Virginia.
Thank you to Ed Worman for pointing out this resource.

Webster, Dow M. Papers, 1864-1865, 1891.
38 leaves and 94 pages.
Papers, 1864-1865, consisting of the Civil War correspondence from Dow M. Webster (1826-1904), 1st New York Engineers, in camp in Chesterfield County, Virginia, to his wife Amanda Rosette Webster (1828-1910) in Ostego County, New York. Topics include family matters and their three children Ella, Ida May, and Ralph Dow Webster, adjustments to life on the home front, camp life, the Siege of Petersburg and Richmond, military engineer duties, troop movements, women’s education, and a description of his living quarters. There are also letters written from Amanda Rosette Webster to her husband concerning family matters, home life and farm work. Transcripts for the letters from Webster to his wife are also contained herein. There are also two letters, 14 and 24 October 1891, from a Webster family member in Washington, D. C., to Ralph Dow Webster (1864-1913) in New York containing a brief Webster family history and genealogy.
Accession 39710. Located at the Library of Virginia in Richmond, Virginia.
Thank you to Ed Worman for pointing out this resource.