EIGHTH REGIMENT, N. Y. S. MILITIA.
The Eighth regiment is in the Second brigade, First division of the State militia organization. It left New York on the 23d of April. The field officers were:
Colonel—George Lyons.
Lieutenant-Colonel—Charles G. Waterbury.
Major—Obed. F. Wentworth.
The regiment embarked, a portion on the steamship Alabama, and the remainder on the ship Montgomery, The line of their march through the streets of New York was the scene of wild enthusiasm, and their friends gathering in balconies and windows, and cheering and inspiring the soldiers with their smiles and warm approvals. They proceeded to Annapolis, and thence to Wash¬ington, and were encamped at Arlington House, Virginia. The regiment was engaged in the battle of Bull Run, and served in the First brigade (Colonel Andrew Porter's), Second division (Colonel Hunter's). Colonel Porter makes honorable mention of the services of the Eighth New York Militia in his report.
Upon first entering service, the regiment remained at Annapolis until the 8th of May, when, accompanied by the 6th Massachusetts Militia, the whole under command of General Butler, they pro¬ceeded to the Relay House and took position commanding Rail¬road Bridge. On the 19th of May, a detachment of 600 men, under command of Lieutenant-Colonel Waterbury and Major Wentworth, and a like detachment of the Sixth Massachusetts, under Colonel Jones, proceeded by railroad to Baltimore and took possession of Federal Hill, thus commanding that city; being the first troops to enter Baltimore after the riots. A few days afterwards, being relieved by Pennsylvania troops, the de¬tachment returned to the Relay House, where the regiment remained until about the 8th of June, when it proceeded to Wash¬ington and went into camp at Kalorama, and remained there until troops were sent over into Virginia. The Eighth left Washingtom on the Sunday following, crossed the Long bridge, and taking possession of Arlington House, where it remained as guard to the headquarters of General McDowell, until the army moved to Bull
Run.
The time of the regiment expiring on the 23d (two days after the battle), they received orders for home, leaving on the 24th and arriving in New York on the 26th of July, where they met with an enthusiastic reception— Broadway was thronged, and vociferous cheers greeted them at every crossing. 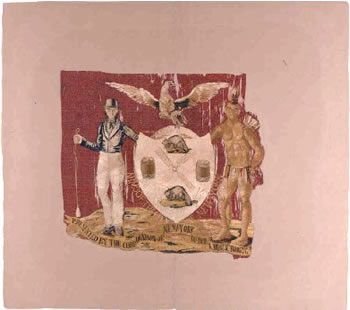 All that remains from this flag is a small fragment featuring the embroidered Arms of the City of New York. 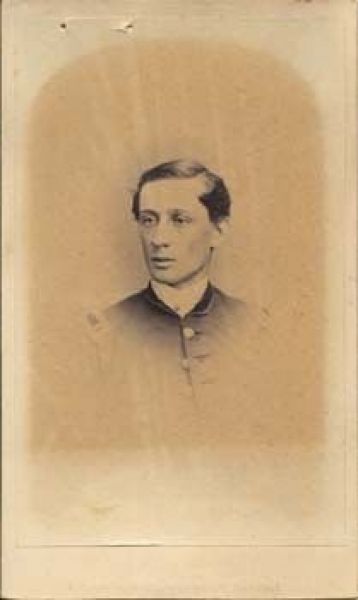 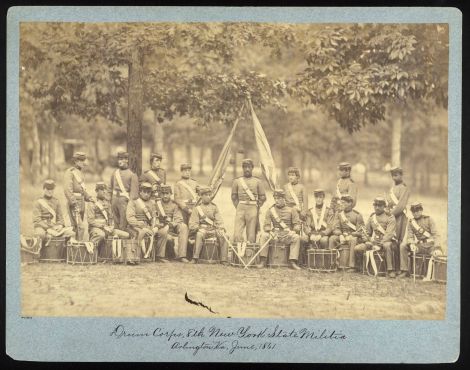 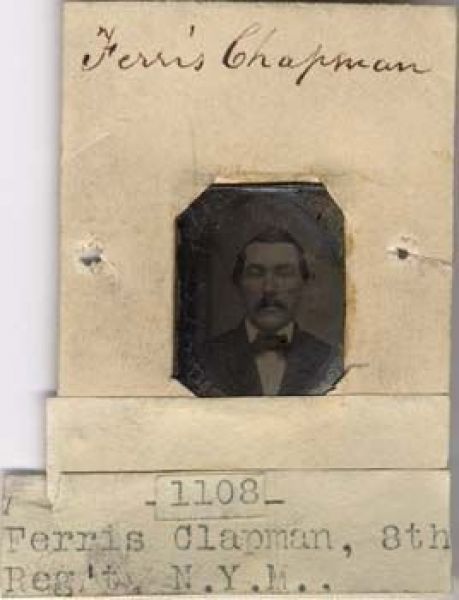 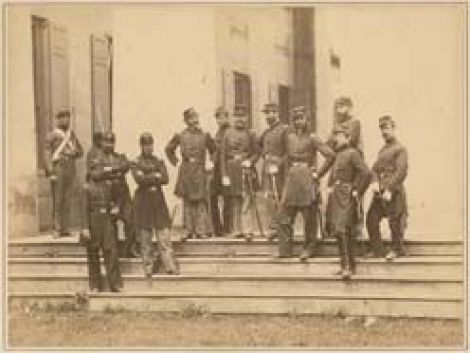 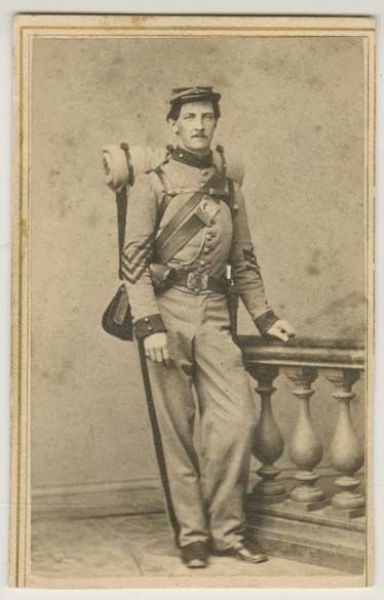 Waud, Alfred R. Captain Varians battery N.Y. 8th S.M. having their first shot at the enemy near Fairfax.
Description: 1 drawing on white paper : pencil ; 12.5 x 17.5 cm. (sheet)
Located at the Library of Congress in the Civil War drawing collection (DLC)
May be accessed at hdl.loc.gov/loc.pnp/cph.3g05092 [link opens new window]
Note(s): Title inscribed below image./ Inscribed below title: Oct. 18-1861--Varians battery near Fairfax./ Inscribed above sketch on verso: The advance of Federal troops in line of battle of skirmishers to the front approaching the enemy near Fairfax.
General Info: No known restrictions on publication./ Forms part of: Civil War drawing collection.