This regiment, Col. Francis L. Vinton, received its State designation September 18, 1861; was organized at Albany and there mustered in the service of the United States for three years in August and September, 1861. The Yates' Rifles, recruited by Col. L. Ayer, four incomplete companies, A, B, C and D, were consolidated into two companies, and September 18, 1861, assigned to this regiment. A company of the Manhattan Rifles, Col. J. M. Freeman, and of the U. S. Volunteers, Col. Wm. Northedge, were also attached to the regiment, and its organization completed. The two companies of the Yates Rifles joined the regiment on its passage through New York city. July 18, 1862, the regiment was consolidated into five companies, A, B, C, D and E, the men of Company K going to Company A; those of F to B; of G to C; of I to D, and of H to E; and in October, 1862, five new companies joined, completing the reorganization of the regiment. October 11, 1864, the men entitled to be discharged were mustered out at Albany; the regiment, however, was continued in service, but, September 22d, consolidated into five companies, A, B, C, D and E; Company A being formed of Companies A and D; B of B and H; C of C and F; D of G and K, and E of E and I.
The companies were recruited principally: A, B and D at Albany; C at Albany and Oneonta; E at Canajoharie; F at Sandy Hill; G — Manhattan Rifles— at Schenectady; H and I—Vales' Rifles — at New York city; and K—U. S. Volunteers — at Cooperstown. The companies joining in October, 1862, were recruited at Albany.
The regiment left the State September 21, 1861; served at and near Washington, D. C., from September 22, 1861; in Hancock's Brigade, Smith's Division, Army of the Potomac, from October 15, 1861; in 1st Brigade, Smith's Division, 4th Corps, Army of the Potomac, from March 13, 1862; in 1st Brigade, 2d Division, 6th Corps, Army of the Potomac, from May, 1862; in the Light Brigade, 6th Corps, during the Chancellorsville Campaign; after that in the 3d Brigade, 2d Division, 6th Corps, Army of the Potomac, and it was honorably discharged and mustered out June 27, 1865, under Col. Charles A. Milliken, at Washington, D. C.
The regiment lost during its service by death, killed in action, 10 officers, 73 enlisted men; of wounds received in action, 4 officers, 30 enlisted men; of disease and other causes, I officer, 126 enlisted men; total, 15 officers, 229 enlisted men; aggregate, 244; of whom 32 enlisted men died in the hands of the enemy.

Forty-third Infantry.— Cols., Francis L. Vinton, Benjamin F. Baker, John Wilson, Charles A. Milliken; Lieut.-Cols., Charles H. Pierson, Benjamin F. Baker, John Wilson, John Fryer, James D. Visscher, Volkert V. Van Patten, Charles A. Milliken, William H. Terrell; Majs., Benjamin F. Baker, John Wilson, John Fryer, William Wallace, John L. Newman, Volkert V. Van Patten, Charles A. Milliken, Samuel Davidson, William Russell. The 43d, the "Albany Rifles," contained five companies from Albany, two from New York city, one from Montgomery county, one from Washington county and one from Otsego county and was organized at Albany, where it was mustered into the U. S. service in Aug. and Sept., 1861, for three years, and left the state for Washington, 700 strong, Sept. 21. It went into camp at Alexandria, Va., being first assigned to Hancock's brigade, Smith's division, 4th corps, Army of the Potomac, and in May, 1862, to the 1st brigade, 2nd division, 6th corps, with which it participated in the siege of Yorktown, fought at Lee's mill, Williamsburg, and in the Seven Days' battles, losing in that week 71 killed, wounded and missing. Owirig to reduction in numbers, the regiment was consolidated on July 18, 1862, into a battalion of five companies. The 43d took part in the battle of Antietam, went into camp at Sharpsburg, Md., where five new companies joined it in October, and was next actively engaged at Fredericksburg, after which it established winter quarters at Fal-mouth. As part of the light brigade, 6th corps, it fought in the Chancellorsville campaign, losing 138 men at Salem Church, and 66 in the assault upon Marye's heights. It again encountered the enemy at Deep Run crossing in June, when the loss of the light brigade was so severe that it was broken up and the 43d was assigned to the 3d brigade, 2nd division, 6th corps, with which it continued to serve during its term of enlistment. The brigade reached Gettysburg on July 2, after a forced march, and went into action the next day. During the autumn of 1863, it encountered the enemy at Rappahannock Station, Locust Grove, Auburn and Mine Run, and finally established winter quarters at Brandy Station in December, when 217 members reenlisted and immediately received their veteran furlough. Camp was broken on May 3, 1864, for the Wilderness campaign which proved to be the most fatal for the 43d of any during its service. In the battle of the Wilderness the total loss was 198 members, including 3 field officers killed or mortally wounded. Although reduced to an effective force of 7 officers and 92 men, the regiment was active at Spottsylvania, the North Anna, Totopbtomy and Cold Harbor and shared in the first assault on Petersburg. At the time of Early's raid, the 6th corps was hurried to Washington and repulsed the enemy at Port Stevens, where Col. Visscher, and 5 enlisted men were killed and 29 wounded. Continuing the campaign in the Shenandoah Valley, the regiment was engaged at Charlestown, the Opequan, Fisher's hill, and Cedar Creek. The original members not reenlisted were mustered out at Albany, Sept. 29, 1864, and 15 officers and 400 veterans and recruits remained in the field, in camp at Winchester. On Dec. 5, the regiment returned to Petersburg and was posted near Fort Stedman. It shared in the final assault April 2, 1865, in the battle of Sailor's creek, and was present at the surrender of Lee's Army at Appomattox. The 6th corps was then stationed for a short time at Danville, Va., after which it participated in the grand review of the Union armies at Washington, where the 43d was mustered out on June 27, 1865. The total strength of the regiment was 2,327 members, of whom 692 were killed, wounded or captured, 94 died from accident or disease, and 27 perished in prison. The deserved reputation of the 43d as a crack fighting regiment is confirmed by Col. Fox, who names it one of the "three hundred fighting regiments." 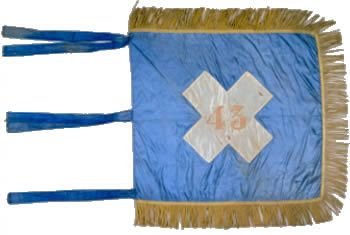 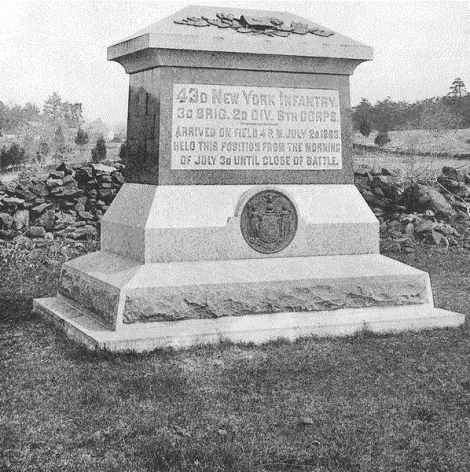 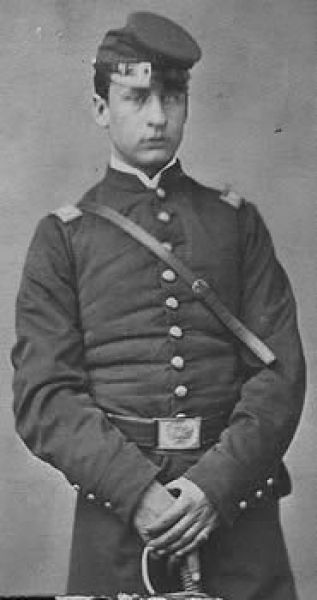 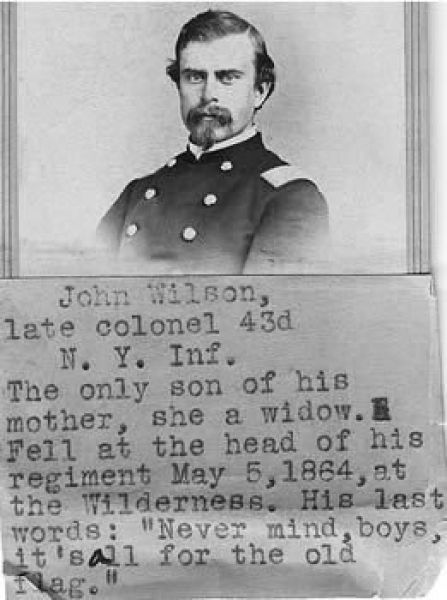 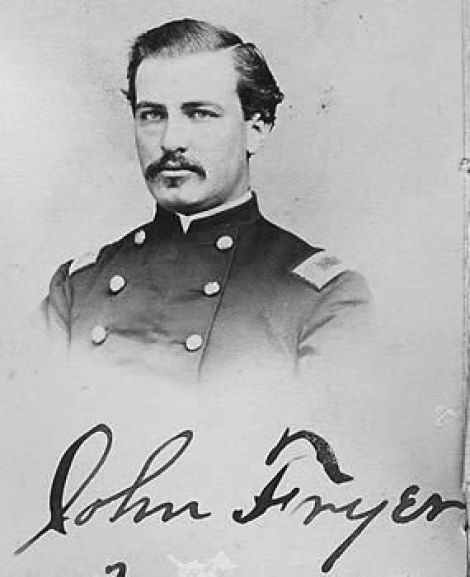 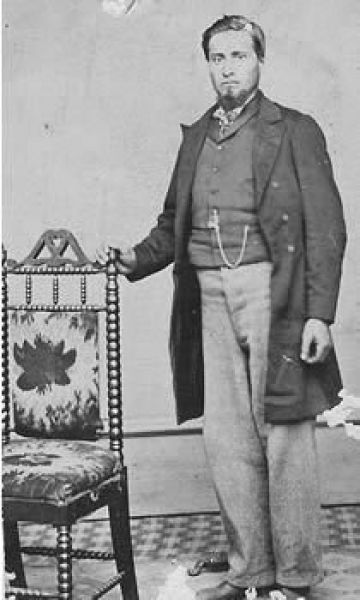 Case, Meigs, Dr. Letters, April-May 1862.
Description: 8 items: 35 cm.
Abstract: Letters to Case's wife and father written during his participation in General George B. McClellan's Peninsula Campaign, 1863, and particularly during the Battle of Williamsburg, May 5, 1862. Describes camp life, difficulties of mobilizing large numbers of men, and duties as a medical officer. Includes a sketch of the Battle of Williamsburg, showing the terrain and the locations of both armies.
Case was a physician with the 43rd Regiment, New York Volunteers.
Located at the Colonial Williamsburg Foundation Research Library.

Engle, George B. Jr. Storming of Marye’s Heights, May 3rd, 1863. 1894.
Description: 0.1c.f. (1 folder)
Abstract: A paper prepared and read by Engle, formerly of Co. A, 5th Wisconsin Infantry Regiment, before the Western Society of the Army of the Potomac at Chicago, September 26, 1894, describing the storming of Confederate-held Marye's Heights outside Fredericksburg on the road to Chancellorsville by the 5th Wisconsin, 6th Maine, and 43rd New York; illustrated with four half-tone prints.
General Info: Presented by George B. Engle, Jr., Chicago, Illinois, June 19, 1901.
At Wisconsin Historical Society archives

United States Army. 43rd New York Infantry Regiment. Register (1801-1805).
1 item.
Collection Call Number: 19552.
A photocopy of a record book listing the names of soldiers absent from duty due to sickness or wounds. Listings include, rank, company, nature of illness or wound, hospital admission, and date of return to active duty, discharge from service or death.
Located at the New York State Library Manuscripts and Special Collections.

Swarts, George, and James H. Stone. Civil War letters [manuscript], 1863-1864.
Located at the University of Virginia Library.
Summary of this collection is here.