This regiment, Col. William D. Kennedy, was organized at Great Neck, L. I., under the auspices of the Tammany Society and the Union Defense Committee of New York city, under special authority from the War Department; and mustered in the service of the United States for three years at Great Neck June 22 and 28 (H and K), 1861. The companies were recruited at New York city. June 28, 1864, the men who were not to be discharged with the regiment, veterans and recruits, were transferred to the 82d Infantry.
The regiment left the State July 18, 1861; served at and near Washington, D. C-, and Poolesville, Md., from July 20, 1861; in Stone's Brigade, Division of Potomac, from August 4, 1861; in Gorman's Brigade, Stone's Division, Army of the Potomac, from October 15, 1861; in Burns' Brigade, same division, Army of the Potomac, from January, 1862; in Dana's, 3d, Brigade, Sedgwick's, 2d, Division, 2d Corps, Army of the Potomac, from March, 1862; in 1st Brigade, 2d Division, 2d Corps, Army of the Potomac, from March, 1864; and it was honorably discharged and mustered out, under Lieut.-Col. Wm. A. Lynch, July 13, 1864, at New York city.
During its service, the regiment lost by death, killed in action, 11 officers, 108 enlisted men; of wounds received in action, 33 enlisted men; of disease and other causes, 1 officer, 105 enlisted men; total, 12 officers, 246 enlisted men; aggregate, 258; of whom 36 enlisted men died in the hands of the enemy.

Forty-second Infantry—Cols., William D. Kennedy, Milton Cogswell, Edmund C. Charles, James E. Mallon, William A. Lynch; Lieut-Cols., Michael Doheny, James I. Mooney, George M. Bom-ford, William A. Lynch, Robert C. Wright; Majs., Peter Bowe, James E. Mallon, Patrick J. Downing. The 42d, the "Tammany Regiment," was recruited in New York city; mustered into the U. S. service at Great Neck, L. I., June 22-28, 1861, for three years; was quartered on Long Island for nearly a month, embarking on July 18 for Washington, where it remained in camp but a short time, when it was ordered to Poolville, Md., and assigned to Stone's brigade. On Oct. 15, the regiment became a part of Gorman's brigade, Stone's division, Army of the Potomac. It behaved gallantly in the battle of Ball's Bluff, but met with the heavy loss of 133 in killed, wounded and missing, including Col. Baker, Col. Cogswell and Capt. Garety. In Jan., 1862, the regiment was attached to Burns' brigade of its old division and in March, to the 3d brigade, 2nd division, 2nd corps, Army of the Potomac, with which it participated in the Peninsular campaign. It was active in the operations before York-town, the battle of West Point, and during the Seven Days' battles, losing at Glendale 56 in killed, wounded and missing. In the battle of Antietam the regiment met with the heaviest loss of its en-tire service—181 killed, wounded or missing, out of 345 engaged in the charge under Gen. Sedgwick which proved so fatal. At Fred-ericksburg the regiment was more fortunate, although 22 were killed or wounded. The winter was passed in camp near Falmouth and in May, 1863, broke camp for the Chancellorsville campaign, in which the regiment was active at Marye's heights and Salem Church. At Gettysburg, under command of Col. Mallon, the regiment received high" commendation for heroic conduct but at the cost of a total loss of 74 members. On the southward march, the 42nd was engaged at Auburn, at Bristoe Station, where Col. Mallon was killed, shared in the operations about Mine Run, fought at Robertson's tavern, and went into winter quarters at Brandy Station. A large number of the men reenlisted in Dec., 1864. Camp was broken May 3, 1864, for the Wilderness campaign, in which the regiment, assigned to the 1st brigade, 2nd division, 2nd corps, conducted itself with courage and steadiness throughout the month of arduous service which culminated at Cold Harbor, the Wilderness, Spottsyl-vania, Laurel Hill, the North Anna, Totopotompy, all being fields of action for the 42nd. On July 13, 1864, the original members not reenlisted were mustered out at New York city and the veterans and recruits were transferred to the 82nd N. Y., which had also won an enviable reputation for fighting qualities. The total strength of the regiment was 1,210 members, of whom 718 were killed, wounded or captured, 152 being killed or dying of wounds and 106 dying of accident, disease or imprisonment. The regiment is numbered by Col. Fox among the "three hundred fighting regiments" and during its service always reflected credit on the state which sent it forth. 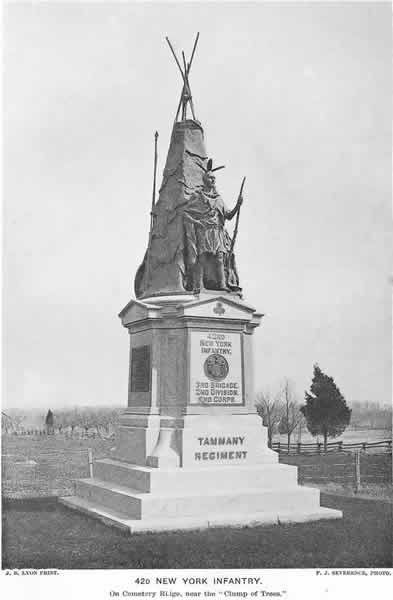 Kreis, Philip. Under two flags : the adventures of Philip Kreis; story of the Tammany Regiment of New York; expericence of one of the members who saw service first in the southern army, then in the 42d New-York Volunteers. [N.p.] 1895.

Sullivan, Eugene. "Bringing up the rear. Critical times in the Peninsula of Virginia." National Tribune, Jan. 7, 1904.

Tammany Society, or Columbian Order. A record of the proceedings at the dedication of the monument erected, September 24, 1891, on the battlefield of Gettysburg by the survivors of the Tammany regiment (Forty-second New York volunteers) in memory of those officers and men of the Regiment who fell during the Civil war, 1861-1865. [New York: Tammany Society print, 1892].