This regiment, Col. J. H. Hobart Ward, was accepted by the State May 25, 1861; organized at New York city and mustered in the United States service at East New York for two years, June 3 and 8 (Company I), 1861. The 18th Militia furnished men for one company. In September, 1861, ninety-seven men of the 4th Me. Volunteers were assigned to the regiment. December 21, 1862, the regiment was consolidated into six companies, A, B, C, D, E and F, and the same day the 55th N. Y. Volunteers, consolidated into four companies, joined by transfer, forming new Companies G, H, I and K of the regiment. June 3, 1863, the three years' men of the regiment, all in the four companies G, H, I and K, were transferred to the 4Oth Infantry, and became Companies A, E and H of the latter.
The original companies were recruited principally: A, B, C, D and F in New York city; E in Westchester county; G in Westchester and Dutchess counties; H at Geneva and in the county of Ontario; I at Horseheads; and K at Elizabethtown.
The regiment left the State June 19, 1861; served at Washington, D. C, from June 21, 1861; in 2d Brigade, 3d Division, Army of Northeastern Virginia, from July 13, 1861; in Howard's Brigade, Division of Potomac, from August 4, 1861; in Sedgwick's Brigade, Heintzelman's Division, Army of the Potomac, from October 15, 1861; in 2d, Birney's, Brigade, 3d, Hamilton's, Division, 3d Corps, Army of the Potomac, from March 3, 1862; in 2d Brigade, 1st Division, 3d Corps, Army of the Potomac, from July, 1862; and was honorably discharged and mustered out, under Col. James C. Strong, June 22, 1863, at East New York.
During its service the regiment lost by death, killed in action, 3 officers, 56 enlisted men; of wounds received in action, 1 officer, 15 enlisted men; of disease and other causes, 3 officers, 43 enlisted men; total, 7 officers, 114 enlisted men; aggregate, 121; of whom 2 officers and 4 enlisted men died in the hands of the enemy.

Thirty-eighth Infantry.—Cols., J. H. Hobart Ward, James C. Strong, Regis De Trobriand; Lieut.-Cols., Addison Farnsworth, James C. Strong, James D. Potter, Robert F. Allison; Majs., James D. Potter, William H. Baird, Augustus Funk, George H. Starr, Francis Jehl. The 38th, the 2nd Scott's Life Guard, composed of seven companies from New York city, one from Geneva, one from Horseheads and one from Elizabethtown, was mustered into the U. S. service at New York city, June .3 and 8, 1861, for two years, and left the state for Washington on the 19th. It went into camp on Meridian hill until July 7, when it was ordered to Alexandria and assigned to the 2nd brigade, 3d division, Army of Northeastern Virginia, and was active at the first battle of Bull Run, where it lost 128 in killed, wounded and missing. During August and September the regiment was employed in construction work at Forts Ward and Lyons in Howard's brigade, and in October was assigned to Sedgwick's brigade, Heintzelman's division. The winter camp was established in Oct., 1861, on the old Fairfax road and occupied until March, 1862, when, with the 2nd brigade, 3d division, 3d corps, the regiment embarked for Fortress Monroe. It participated in the siege of Yorktown; the battle of Williamsburg, where the loss of the command was 88 in killed, wounded and missing; shared in the engagement at Fair Oaks, and in the Seven Days' battles, after which it encamped at Harrison's landing until Aug. 15. From there it moved to Yorktown and Alexandria; was active at the second Bull Run and Chantilly; reached Falmouth on Nov. 25, and at Fredericksburg, lost 133 members killed, wounded and missing. On Dec. 22, 1862, the regiment received the addition of four companies of the 55th N. Y., which were added to the six companies of the 38th formed by consolidation of the regiment on Dec. 21. It participated in the "Mud March;" returned to camp near Falmouth; engaged in the Chancellorsville campaign; was then stationed at Ac-quia Creek until the troops started for New York on June 4 and was mustered out at New York city, on the 22nd. The three years men were transferred to the 40th N. Y. infantry, of which regiment they became Cos. A, E and H. The total strength of the regiment was 796 and it lost 75 by death from wounds and 46 from other causes.

Taking Possession of the Red Redoubt

Plan of the Redoubt And Rifle Pits 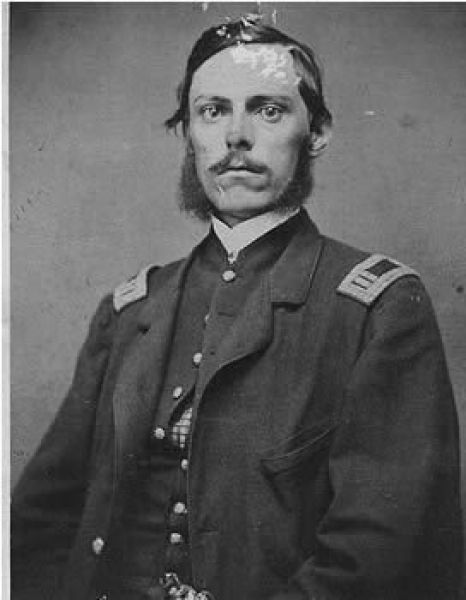 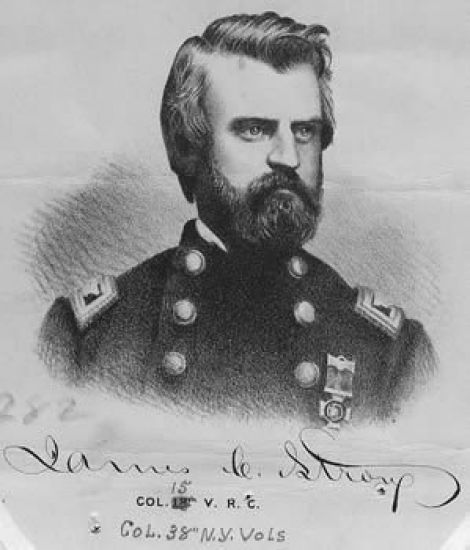 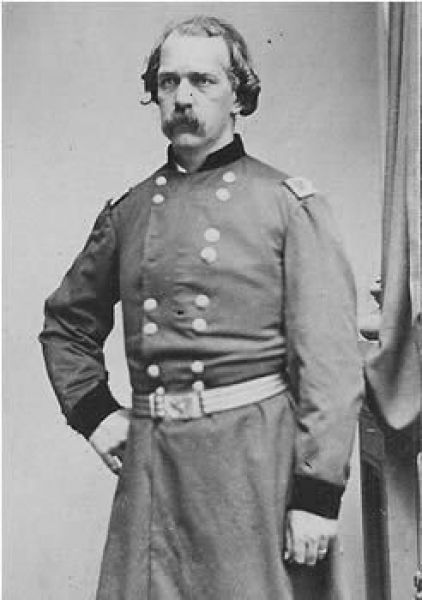 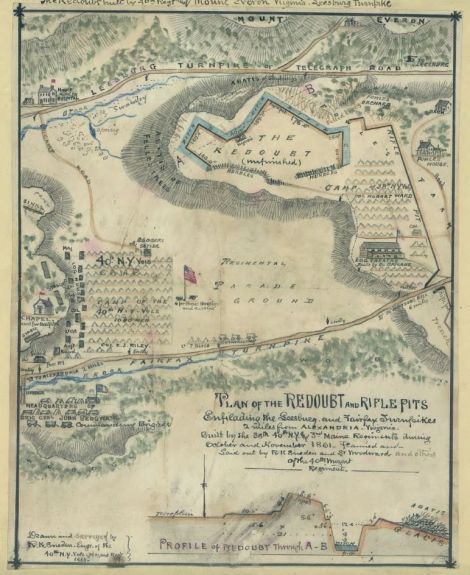 Plan Of The Redoubt And Rifle Pits Ensilading [Sic] The Leesburg And Fairfax Turnpikes 2 Miles From Alexandria, Virginia. : Built By The 38th, 40th N.Y. And 3rd Maine Regiments During October And November 1861. 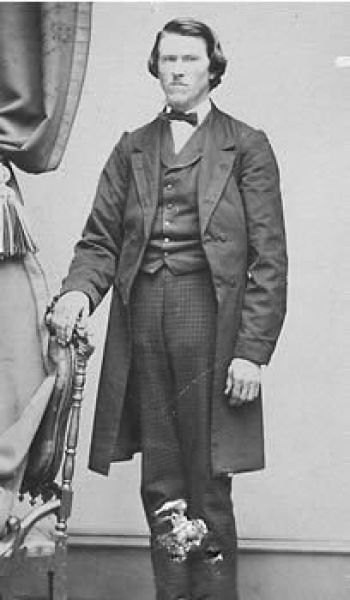 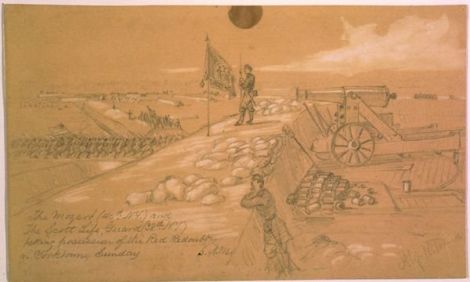 Hallack, John F. 38th New York Infantry, Co. A.
Letters (1862). 10 items.
Collection Call Number: 19426.
Group of letters sent to Hallack's cousins regarding the Peninsular Campaign. They include detailed descriptions of the battles at Williamsburg, Yorktown and Fair Oaks. In addition, he also wrote about the destruction and pillaging of civilian property that occurred.
Located at the New York State Library Manuscripts and Special Collections.

Johnson, Crisfield. History of Oswego County, New York. : With illustrations and biographical sketches of some of its prominent men and pioneers. Philadelphia: L.H. Everts & co, 1877, 1991.

Laughton, Joseph B. Letters, 1861-1865.
Year: 1861-1862
Description: 5 items.
Abstract: Letters describing the movements and campaigns of the Army of the Potomac, especially during the battles of Yorktown, Williamsburg, and Richmond, in 1862.
Located at Duke University.

Murphy, Charles J. Reminiscences of the War of the rebellion and of the Mexican war, by Charles J. Murphy. New York: F. J. Ficker, 1882.