The organization of this regiment, located in Brooklyn and still in existence, dates from the 20th of January, 1862, when its first company (A) was mustered into the State service; the regimental organization was perfected July 14, 1862.

This regiment (ten companies) left the State June 18, 1863, commanded by Col. William Everdell, Jr. It was mustered in the United States service for thirty days at Harrisburg, where, and in the vicinity of which, it served in the 3d Brigade, 1st Division, Department Susquehanna. It was mustered out at Brooklyn, July 22, 1863. 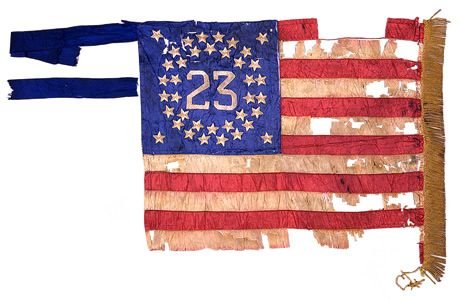 This general guide flag in the US National pattern conforms to the 1889 U.S. Army Regulations. The flag includes 38 embroidered stars in two… 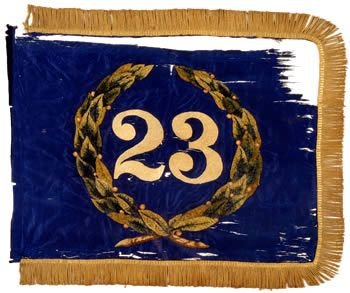 This blue silk flank marker from the late 19th century features an embroidered wreath and regimental designation. The weight of the embroidery and…

Guide to the New York State National Guard, 23rd Infantry Regiment records ARC.216
Scope: This collection includes materials dating from 1863 to 1957 documenting the peacetime activities of the NGSNY 23rd (later 106th) Infantry Regiment, as well as the Regiment's service in the Civil War and World War I. Items include muster rolls and member lists, dinner and event programs and invitations, regimental histories, news clippings, photographs, and issues of the Regiment's journals, The Guardsman and  Vigilantia. Also included are two scrapbooks of decorations, notes and correspondence, photographs, clippings, and ephemera. One scrapbook commemorates a rifle match between the NGSNY 23rd Regiment and the 13th Regiment of the Pennsylvania National Guard at Gettysburg in 1893, while the other relates to the 23rd Regiment's visit to Gettysburg in 1904. The latter scrapbook is oversized and is housed separately from the rest of the collection. Finally, the collection contains a small number of items documenting the Veteran Association of the 23rd Regiment's Company A, including a dinner and meeting announcement and a single volume containing the Association's constitution, amendments, and membership lists with autograph signatures and addresses for each member.
Located at the Brooklyn Historical Society.
Thank you to John Zarrillo for recommending this resource.

Lockwood, John. Our campaign around Gettysburg : being a memorial of what was endured, suffered, and accomplished by the Twenty-third regiment (N.Y.S.N.G.) and other regiments associated with them, in their Pennsylvania and Maryland campaign, during the rebel invasion of the loyal states in June-July, 1863. Brooklyn : A.H. Rome, 1864.