This regiment, Col. Max Weber, was accepted by the State for a service of two years, May 11, 1861; organized at New York city, and there mustered in the United States service May 6, 8 and 9, 1861, the field and staff and Companies A, B, C, D and E for three months, the remaining companies for two years. At the request of the general government, the Governor of the State, August 2, 1861, ordered the portion of the regiment mustered in for three months only into the service of the United States for the unexpired portion of the regiment's term of State service. The three years' men of the regiment were, May 7, 1863, transferred to the 3d N. Y. Volunteer Battery, and Battery F, 5th Regiment, U. S. Artillery.
The companies were recruited principally: A in Newark, N. J., and vicinity; B, C, E and F in New York city; D in New York city, Albany, Poughkeepsie, and a few men in New Jersey; G in New York city, Poughkeepsie, Rochester, Syracuse, and in Newark, N. J.; H in New York city, Brooklyn, Hudson, Morrisania, Saugerties and Union Hill; I in Brooklyn, Williamsburgh and College Point; and K in New York city, Brooklyn, and in New Jersey.
The regiment left the State June 13, 1861; served at and near Fort Monroe, Va., from June 15, 1861; at Fort Hatteras, N. C., from August 28, 1861; at Fort Monroe, Va., from September 13, 1861; at and near Norfolk, Va., in 7th Corps, from May 10, 1862; in the 3d Brigade, 2d Division, 6th Corps, Army of the Potomac, from June 9, 1862; and it was honorably discharged and mustered out, commanded by Col. Ernest Von Vegesack, June 1, 1863, at New York city.
A reorganization of the regiment was attempted but failed, and the men enlisted were transferred to the 16th N. Y. Volunteer Cavalry, October 14, 1863.
During its service the regiment lost by death, killed in action, 3 officers, 42 enlisted men; of wounds received in action, 4 officers, 12 enlisted men; of disease and other causes, I officer, 58 enlisted men; total, 8 officers, 112 enlisted men; aggregate, 120.

Twentieth Infantry.—Cols., Max Weber, Francis Weiss, Baron Ernst Von Vegesack; Lieut.-Cols., Franz Weiss, Egbert Schnepf; Majs., Engleberth Schnepf, Lorenz Meyer. The 20th regiment, the "United Turner Rifles," was composed of volunteers from the Turner societies of New York city and vicinity and was mustered into the U. S. service at New York city, May 6, 1861, for two years. For more than a month the regiment was quartered at the Turtle Bay brewery and on June 13, embarked for Fortress Monroe, where-it encamped at Tyler's point for a month and then moved to Hampton. At the time of the organization of the regiment, a portion of the men were mustered into the state service for two years and the U. S. service for three months and on Aug. 2, under special orders the three months men were mustered into the U. S. service for the remainder of the two years' term. On Aug. 26, the regiment embarked for Fort Hatteras, where it participated in the capture of the fortifications and remained quartered until Sept. 25, when it returned to Virginia. The entire- regiment occupied Camp Hamilton until Oct. 7, when four companies were sent to Newport News, engaging the enemy at Sinclair's farm and New Market bridge and rejoined the regiment at Camp Hamilton on Feb. 20, 1862. On May 9 the 20th embarked for Norfolk; moved from there via Portsmouth, White House landing and Savage Station and joined the Army of the Potomac at Camp Lincoln, where it was assigned to the 3d brigade, 2nd division, 6th corps. During the Seven Days' battles the loss of the command was 64 killed, wounded or missing, after which it was encamped at Harrison's landing from July 2 to Aug. 16, when it was ordered to Fortress Monroe and from there to •Alexandria and Manassas. It participated in the battle of South mountain and suffered its heaviest loss at Antietam, when 145 of its number were killed, wounded or missing. From Nov. 18 to Dec. 4, it was encamped at Acquia creek, then proceeded to Falmouth arid was placed in support of artillery during the battle of Freder-icksburg. Winter quarters were established at White Oak Church and occupied, except during the "Mud March," until April 20, 1863. Toward the last of April 202 members of the command refused further service, claiming that the term of enlistment had expired. They were disciplined by arrest and the regiment was active in the Chancellorsville campaign. The term of service having expired, the regiment left for New York on May 6, and was there mustered out June 1, 1863. During its service it lost 62 members by death from wounds and 59 died from other causes. 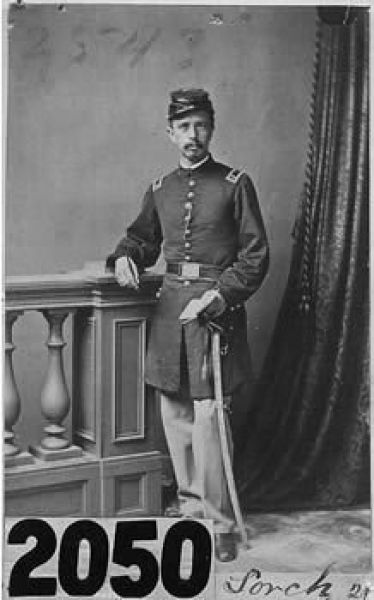 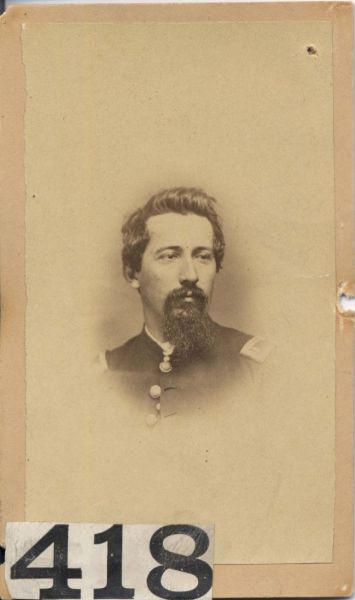 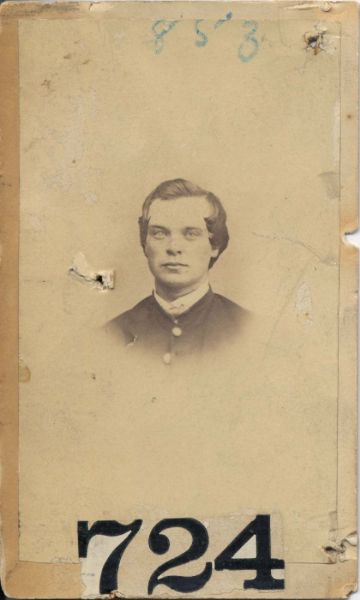