Major W. T. C. Grower received, June 3, 1863, authority to reorganize, for a period of three years, the 17th N. Y. Volunteers, discharged by reason of expiration of term of service. October 1, 1863, the men enlisted for the nth N. Y. Volunteers, second organization, were transferred to this regiment, and its reorganization completed on Staten Island, October 14, 1863, by the transfer to it of the men enlisted for 9th and 38th N. Y. Volunteers, second organizations, and the Union Sharpshooters, an organization not completed and recruited under Col. Achille M. B. de Villarceau under authority dated July 10, 1863.
The men were recruited principally in New York city; a few at Albany, Brooklyn, Buffalo, New Dorp, Norwich, Jamaica and Poughkeepsie, and the men originally enlisted for the nth N. Y. Volunteers formed Companies D and E; those enlisted for the 9th Veteran Volunteers Companies H and I; those for the 38th Veteran Volunteers Company K; while the Union Sharpshooters formed parts of the other companies.
The regiment left the State October 18, 1863; served at Louisville, Ky., from October, 1863; at Eastport, Tenn., from November 7, 1863; at Union City and vicinity, Ky., in 6th Division, 16th Corps, from December 12, 1863; at Vicksburg, Miss., in 4th Division, 16th Corps, from January 27, 1864; on General Sherman's Meridian Expedition, in 2d Brigade, 4th Division, 16th Corps; at Decatur, Ala., in 3d Brigade, 4th Division, 16th Corps, from April 9, 1864; in the 16th Corps from August 8, 1864; in 1st Brigade, 2d Division, I4th Corps, from August 21, 1864; in the 1st Brigade, 22d Corps, from June 9, 1865; and, commanded by Col. James Lake, it was honorably discharged and mustered out July 13, 1865, at Alexandria, Va.
During its service the regiment lost by death, killed in action, 1 officer, 38 enlisted men; of wounds received in action, 1 officer, 16 enlisted men; of disease and other causes, 65 enlisted men; total, 2 officers, 119 enlisted men; aggregate, 121; of whom 2 enlisted men died in the hands of the enemy.

Seventeenth Veteran Infantry.—A large proportion of the members of the I7th reenlisted immediately after being mustered out at New York and with the addition of recruits for the 9th and 38th regiments and the "Union Sharpshooters," the I7th again took the field in Oct., 1863. It was immediately ordered to join the army under Gen. Sherman; was stationed during that autumn at Louisville, Ky., Eastport, Tenn., and Union City, Ky.; reached Gen. Sherman's force at Vicksburg, Jan. 24, 1864, where it was assigned to the 2nd brigade, 4th division, 16th corps; participated in the Mississippi campaign, being active in sharp skirmishes at Decatur, Ala., Moulton, etc. In April the I7th was assigned to the 3d brigade, 4th division, 16th corps, and in August, at Atlanta, was transferred to the 1st brigade, 2nd division, 14th corps, with which it participated in the siege operations, the Hood campaign and the march to the sea. It was engaged at Rockingham, Fayetteville, Averasboro, Bentonville, Goldsboro and Smithfield, N. C.; was assigned June 9, 1865, to the 1st brigade, 22nd corps; returned to Washington with Gen. Sherman; participated in the grand review and was mustered out at Alexandria, Va., July 13, 1865. The loss of the veteran regiment during its term of service was 56 deaths from wounds and 65 from accident, disease or imprisonment. 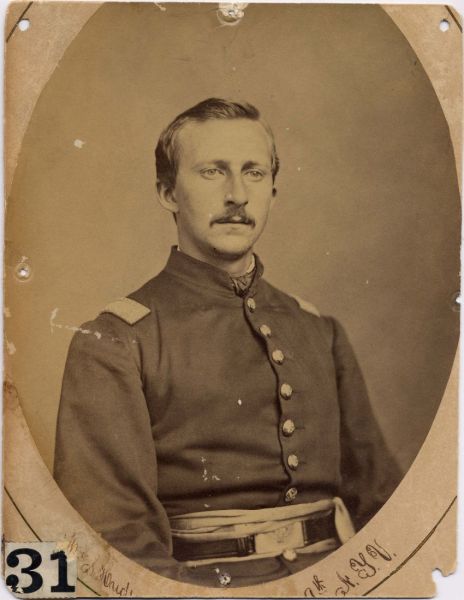 See the further reading section under the 17th Regiment Infantry.