The following is taken from New York in the War of the Rebellion, 3rd ed. Frederick Phisterer. Albany: J. B. Lyon Company, 1912.
This regiment, Col. Lewis Benedict, was authorized as one of the regiments of the Metropolitan Brigade; it was recruited under the auspices of the metropolitan police at New York city; organized at Riker's Island, New York harbor, and there mustered in the service of the United States for three years; Companies B and C October 14th; A, D, E, G, H, I and K October 18th; Company F August 22, 1862, at New York city. To complete the organization of the regiment Companies D and K, 53d Infantry, second organization, were assigned to it as Company F. Company H was transferred to Company F March 1, 1863; and in December, 1863, was reformed of recruits. February 17, 1864, the 174th Infantry was consolidated with it, company to corresponding company.
The regiment left the State October 24, 1862; it served in Abercrombie's Division, defenses of Washington, from October, 1862; at Hampton Roads, Va., from November 12, 1862; at New Orleans, Carrolton, Donaldsonville, La., from December 15, 1862; in 1st Brigade, 3d Division, 19th Corps, from February, 1863; in 1st Brigade, 2d Division, 19th Corps, from May 31, 1863; at Springfield Landing, La., detached, from June 20 to July 14, 1863; in 1st Brigade, 3d Division, 19th Corps, from July, 1863; in 3d Brigade, 1st Division, 19th Corps, from January, 1864; in 3d Brigade, Dwight's Division, Army of the Shenandoah, from March, 1865; in the same, defenses of Washington, D. C., from April, 1865; in the 3d Division, Department of the South, from June, 1865; in the Department of Georgia from July, 1865; and, commanded by Col. Justus W. Blanchard, it was honorably discharged and mustered out October 12, 1865, at Savannah, Ga.
During its service the regiment lost by death, killed in action, 4 officers, 34 enlisted men; of wounds received in action, 4 officers, 28 enlisted men; of disease and other causes, 4 officers, 150 enlisted men; total, 12 officers, 212 enlisted men; aggregate, 224; of whom 1 officer and 26 enlisted men died in the hands of the enemy.

The following is taken from The Union army: a history of military affairs in the loyal states, 1861-65 -- records of the regiments in the Union army -- cyclopedia of battles -- memoirs of commanders and soldiers. Madison, WI: Federal Pub. Co., 1908. volume II.
One Hundred and Sixty-second Infantry.—Cols., Lewis Benedict, Justus W. Blanchard; Lieut.-Cols., Justus W. Blanchard, James M. Vanderburgh; Majs., James M. Bogart, Robert W. Leonard, George W. Keating, F. W. Coleman, John W. Babcock, William P. Huxford. The 162nd, the "Third Metropolitan Guard," was a New York city regiment, recruited under the auspices of the Metropolitan police. To complete its organization, the men enlisted for Cos. D and K, 53d N. Y. 2nd organization, were assigned to it as Co. F. In 1863 a new Co. H was recruited to take the place of the old company transferred and in Feb., 1864, the 174th N. Y. was consolidated with the 162nd. The regiment was organized at Riker's island, N. Y. harbor, and there mustered into the U. S. service from Aug. 22 to Oct. 18, 1862, for three years. It left the state on Oct. 24, proceeded to Washington, whence it was ordered to Hampton Roads in November, and the following month embarked for New Orleans. It served for several weeks at New Orleans, Car-rollton and Donaldsonville, La., during which period it was twice engaged at Plaquemine with small loss. As a part of Emory's (3d) division, 19th corps, it shared in the operations leading up to the investment of Port Hudson, taking part in the skirmish on the Clinton plank road, and being present at Fort Bisland, but without loss. A detachment of Co. I, under Lieut. Neville, was in the skirmish in April at Bayou Courtableau. In the 1st brigade, 2nd (Sherman's) division, 19th corps, it was actively engaged during the siege of Port Hudson, losing heavily in the general assaults of May 27 and June 14, its loss in killed and wounded aggregating 59, among the former being Maj. Bogart. It was on detached service at Springfield landing in June and July, losing 10 killed and wounded in a skirmish on July 2. It was then assigned to the 1st brigade, 3d division, 19th corps, and was twice engaged at Vermilion bayou in the fall of 1863. In March, 1864, attached to the 3d brigade, 1st (Emory's) division, 19th corps, it started on Banks' Red River campaign, taking part in the battles of Sabine crossroads, Pleasant Hill, Cane river crossing and Mansura. The regiment suffered severely at Pleasant Hill, where it lost 106 killed, wounded and missing. Col. Benedict, commanding the brigade, was killed here while bravely leading a charge. The loss at Cane river crossing was 37 killed, wounded and missing. In July the regiment returned to Virginia with the divisions of Emory and Grover and while before Richmond, lost 49 killed, wounded and missing. It accompanied Dwight's division of the Army of the Shenandoah to Washington in April, 1865, and a few weeks later sailed with it to Savannah, Ga., where the regiment was mustered out, commanded by Col. Blanchard, Oct. 12. 1865. Its loss by death during service was 8 officers and 62 men killed and mortally wounded; 3 officers and 151 men died of disease and other causes, a total of 224. 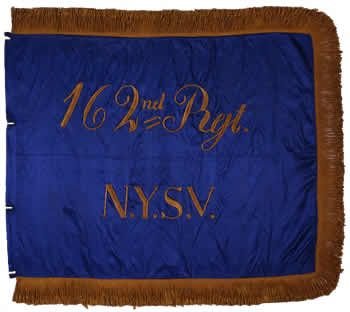 Checquer, William L. Letter, 25 November 1864.
Letter addressed to an uncle while emcamped at Newtown, Virginia during the Shenendoah Valley Campaign of 1864. In this letter, Checquer describes his narrow escape from capture by the Confederates near Winchester. He also mentions having to pay 64 cents to the government to replace a haversack lost in the escape.
1 item.
Located at the New York State Library Manuscripts and Special Collections.

Parmele, Theodore W. Extra bounty! :Families of recruits provided for. By the liberal contribution of the Grocers' Committee, the Fifth Metropolitan Guard Col. T.W. Parmele, is enabled to offer an extra cash bounty of $10 for each recruit in addition to other bounties. The families of recruits are also provided for by the Metropolitan Police Fund, and have the gratuitous services of the physicians of the Police Department at their own homes. Headquarters, Howard St., near Broadway. New York, N.Y. : s.n., 1862.
1 sheet ([1] p.) ; 16 x 31 cm.
Located at the Library Company of Philadelphia.

Suydam, G. H. G.H. Suydam photograph album1862-1863. Baton Rouge, La. : Louisiana Digital Library, 1862-1863 .
Twenty photographs taken between 1862 and 1863 show Baton Rouge, La., under occupation by Union forces. These photographs of street scenes, buildings, Union naval vessels, and Union army encampments are among the very earliest photographic views of Baton Rouge known to exist. Memoranda handwritten on the reverse side of the photographs identify the Federal camp, headquarters of the generals, the provost marshall's office, and the general hospital; scenes at the grounds of the Baton Rouge Arsenal; and gunboats and other vessels of Farragut's fleet.
The collection contains commercial photographs of twelve (12) scenes of Baton Rouge and eight (8) photographs of ships of the West Gulf Blockading Squadron (Admiral Farragut's fleet) on the Mississippi River at Baton Rouge. Captain G. H. Suydam of the 162 nd New York Volunteers Infantry, U.S.A., secured these during his service with the Federal Army at Baton Rouge in the Spring of 1863. Three (3) of the images have the McPherson and Oliver backstamp.
Most of the photographs have handwritten memoranda on the back (verso) identifying the images on the front (recto). These memoranda have been transcribed directly from the versos as captions for the images. Notes created in house have been used for any im ages without memoranda.
The collection also includes: a copy of the Natchitoches (La.) Union, January 29, 1863; a copy of The New Orleans Times, April 15, 1864; a copy of the Freemasons' Monthly Magazine, vol. IV, no. 8, June 1, 1845.
20 digital images.
Located at Louisiana State University.

United States. Adjutant-General's, Office. Alphabetical index of the 162d New York volunteer infantry, being an abstract of the field and staff and company rolls . . , February 16, 1889. Referred to the Committee on military affairs. Washington: Govt. print, office [1889].