The following is taken from New York in the War of the Rebellion, 3rd ed. Frederick Phisterer. Albany: J. B. Lyon Company, 1912.
Colonel Gabriel T. Harrower was authorized, September 6, 1862, to recruit this regiment in the then 27th Senatorial District of the State; it was organized at Elmira, and there mustered in the service of the United States for three years October 27, 1862. Commanded by Maj. Willis E. Craig, the regiment—that is, those men whose term of service was about to expire — was mustered out September 20, 1865, at Fort Jefferson, Fla.; the men not then discharged were formed into a battalion of two companies, A and B; the men of Companies A, C, E, H, K and F forming Company A, and those of B, D, G and I Company B, and continued in service.
The companies were recruited principally: A at Urbana, Pultney, Prattsburg and Wheeler; B at Elmira, Watkins, Tyrone, Reading, Hector and Dix; C at Elmira; D at Bath; E at Hornellsville, Chenango, Hector, Binghamton, Catharine, Colesville, Montour and Hampton; F at Bath and Howard; G at Corning, Watkins, Reynoldsville and Binghamton; H at Woodhull, Jasper, Greenwood and Troupsburg; I at Cohocton and Avoca; and K at Norwich, Columbus, Guilford, Sherburne and Cazenovia.
The regiment left the State December 4, 1862; it served in Grover's Division, Department of .the Gulf, from December, 1862; in 2d Brigade, Augur's Division, from December 31, 1862; in the 3d Brigade, Augur's Division, 19th Corps, from January 21, 1863; in 3d Brigade, 1st Division, 19th Corps, from March, 1863; in the 1st Brigade, 1st Division, 19th Corps, from August 15, 1863; in the Engineer Brigade, Department of the Gulf, from June, 1864; with the I7th Corps from August 14, 1864; in the 3d Brigade, 2d Division, Reserve, 19th Corps, from August 17, 1864; at Columbus, Ky., from October, 26, 1864; in the 3d Brigade, 2d Division, Reserve, 19th Corps, at Memphis, Tenn., from November 20, 1864; in the 4th Brigade, Reserve, Military Division of Western Mississippi, from December 4, 1864; in 3d Brigade, 1st Division, I3th Corps, from February, 1865; in the District of Florida in June, 1865; in the Department of Florida from July, 1865; and it was honorably discharged and mustered out November 12, 1865, at Tallahassee, Fla.
During its service the regiment lost by death, killed in action, 1 officer, 32 enlisted men; of wounds received in action, 23 enlisted men; of disease and other causes, 250 enlisted men; total, 1 officer, 305 enlisted men; aggregate, 306; of whom 13 enlisted men died in the hands of the enemy.

The following is taken from The Union army: a history of military affairs in the loyal states, 1861-65 -- records of the regiments in the Union army -- cyclopedia of battles -- memoirs of commanders and soldiers. Madison, WI: Federal Pub. Co., 1908. volume II.
One Hundred and Sixty-first Infantry.—Cols., Gabriel P. Har-rower, Henry G. Harrower; Lieut.-Cols., Marvin D. Stillwell, William B. Kinsey; Majs., Charles Straun, Willis E. Craig. This regiment was recruited by Col. Gabriel P. Harrower in the fall of 1862 in the counties of Chemung, Steuben, Schuyler, Chenango and Broome. It was organized at Elmira and was there mustered into the U. S. service for three years, Oct. 27, 1862. It left the state on Dec. 4, for the Department of the Gulf, where it was first assigned to Grover's division, and soon after, to the 3d brigade, 1st (Augur's) division, 19th corps, with which it fought at Clinton plank road, Plains store, and. in the long siege of Port Hudson. Its loss during the siege was 17 killed, wounded and missing. In July it was heavily engaged at Donaldsonville, La., with a loss of 7 killed, 39 wounded and 7 missing, and in September it formed part of Franklin's unsuccessful Sabine Pass expedition to Texas, sustaining a loss of 30 killed, wounded and missing. As a part of Emory's (1st) division, 19th corps, it participated in Banks' Red River campaign in the spring of 1864, during which it fought at Sabine cross-roads, Pleasant Hill, Cane river crossing and Mansura. The regiment was very heavily engaged at Sabine cross-roads under command of Lieut.-Col. Kinsey, losing 13 killed, 64 wounded and 30 missing. When the first two divisions of the 19th corps were ordered to Virginia in July, 1864, the 161st remained in the Department of the Gulf and was stationed successively at Columbus, Ky., Memphis, Tenn., and in western Mississippi. In the spring of 1865, as part of the 3d brigade, 1st division, 13th corps, it took part in Gen. Canby's operations against Fort Blakely, Spanish Fort and Mobile, Ala., after which it was ordered to Florida and was finally mustered out at Tallahassee on Nov. 12, 1865. Those whose terms were about to expire had been previously mustered out, under command of Maj. Craig, Sept. 10, 1865, at Fort Jefferson, Fla., after, which the regiment was consolidated into a battalion of two companies. During its term of service, the 161st lost by death, 1 officer (2nd Lieut. Lewis E. Fitch, killed at Sabine cross-roads) and 55 enlisted men killed and mortally wounded; 250 enlisted men died of disease and other causes, a total of 306. 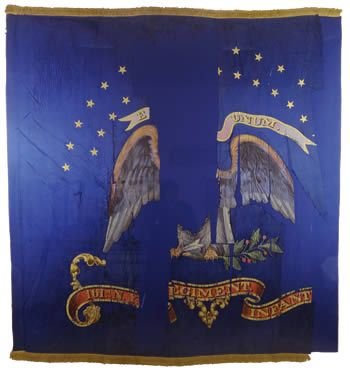 This blue silk regimental color carried by the 161st Regiment NY Volunteer Infantry features a painted Arms of the United States in the center. The…

Garrison, Abraham. Abraham Garrison letters,1862-1863.
Letters to Garrison's wife, Lydia, and to friend, Robert, describe camp life and starving citizens in Baton Rouge, criticize officers and use of African-American soldiers, and refer to Confederate guerillas in the area. He details his experience in the siege of Port Hudson and refers to a rumor about four African-American Confederate regiments. Military activity on the Mississippi River is also noted. Garrison makes reference to neighbors demanding payments he does not owe. He asks Lydia to report on their livestock and to harvest the wheat crop. The final document is Garrison's official death notice.
20 items.
Located at Louisiana State University.

New York (State). State Historian. "The Sabine Pass Expedition. The thrilling experience of detachments from the Seventy-fifth and One Hundred and Sixty-first New York aboard two gunboats on that unfortunate trip, September 8, 1863." Third annual report of the State Historian of the State of New York, 1897 : Transmitted to the Legislature March 14, 1898. New York: Wynkoop, Hallenbeck, Crawford Co. 1898.

Wyckoff, Elias. Elias Wyckoff correspondence,1862-1863. An exchange of letters between Elias Wyckoff, a farmer from Jasper, Steuben County, New York, and a member of the 161st Regiment, New York State Volunteers, and his wife, who operated their farm during his absence. Wyckoff gives his impressions of New York City as seen from his camp in Central Park, and describes the military situation in Baton Rouge, where he was later stationed, and at Port Hudson prior to and following the March 14 battle and ensuing siege. In other letters he comments on his duties as a driver of an army ambulance. Letters from Wyckoff's wife tell of the scarcity of money, farm problems, and family and social life in the New York community of Jasper.
11 letters.
Located at Louisiana State University.

Young, John M. The John M. Young collection, 1862-1863.
58 items (1,565 cubic in.)
Collection consists of 41 letters written on 44 sheets of paper, along with 14 envelopes, and 3 other documents. The letters range in date from May 1, 1862 to July 28, 1863. The unassociated envelopes and miscellaneous documents are undated.
John Young was a member of Companies C and F of the 14th Infantry Regiment, United States Army. 36 of the letters were written to his wife, Rosetta. 2 letters were written by Rosetta Young. 1 letter was written by Wyatt Terwilliger to his brother. Wyatt Terwilliger was in Company C, 161st New York Volunteer Infantry. He died in 1863. 1 letter was written by Charles Terwilliger to John Young. Charles Terwilliger was in Company B, 107th New York Volunteer Infantry. He died in 1862.
Located at the State University of New York at Binghamton.