The following is taken from New York in the War of the Rebellion, 3rd ed. Frederick Phisterer. Albany: J. B. Lyon Company, 1912.
Colonel John E. McMahon received authority, August 8, 1862, to recruit the 155th Regiment with headquarters at Buffalo; October 7th, the regiment was designated to be the 3d of the Corcoran Brigade, and ordered to New York city.
Colonel Wm. McEvily received authority, October 10, 1862, to recruit the 5th Regiment of the Corcoran Brigade at New York city. November 17, 1862, at reorganization of the Corcoran Brigade, the 2d Regiment was formed of the original 5th and Companies A and D of the 3d and D of the 6th, the latter companies as I, K and H, respectively; it was designated the 155th Regiment with Wm. McEvily as Colonel; the bulk of the 3d, original 155th, with Colonel McMahon, became the 164th Regiment. The regiment was mustered in the service of the United States for three years November 17 and 18, 1862, at Newport News, Va.
The companies were recruited principally: A, B, C and H at New York city; D at Brooklyn, Huntington, Islip,. Hempstead, Southold, Oyster Bay and New York city; E at New York city, Oyster Bay, Islip, Hempstead, Southampton and Brooklyn; F at New York city and Binghamton; G at New York city and Brooklyn; I at Buffalo; and K at Buffalo and New York city.
The regiment left the State November 10, 1862; it served at Newport News, Department of Virginia, from November, 1862; at Suffolk, Va., in Corcoran's Brigade, Peck's Division, from December, 1862; in Corcoran's, later Murphy's, Brigade, Peck's, later Corcoran's, Division, 7th Corps, from January, 1863; in 1st Brigade, King's Division, 22d Corps, from July 16, 1863; in 2d Brigade, Tyler's Division, 22d Corps, from January, 1864; in 4th Brigade, 2d Division, 2d Corps, from May 17, 1864; in 2d Brigade, 2d Division, 2d Corps, from June 26, 1864; and, commanded by Col. John Byrne, it was honorably discharged and mustered out July 15, 1865, near Washington, D. C.
During its service the regiment lost by death, killed in action, 3 officers, 64 enlisted men; of wounds received in action, 6 officers, 42 enlisted men; of disease and other causes, 2 officers, 72 enlisted men; total, 11 officers, 178 enlisted men; aggregate, 189; of whom 2 officers, 35 enlisted men, died in the hands of the enemy.

The following is taken from The Union army: a history of military affairs in the loyal states, 1861-65 -- records of the regiments in the Union army -- cyclopedia of battles -- memoirs of commanders and soldiers. Madison, WI: Federal Pub. Co., 1908. volume II.
One Hundred and Fifty-fifth Infantry.—Cols., William Mc-Evily, Hugh C. Flood, John Byrne; Lieut.-Cols., James P. McMa-hon, Hugh C. Flood, John Byrne; Majs., Hugh C. Flood, John Byrne, John O. Dwyer, Michael Doran, James M-cConvey, Francis Paige. This was the second regiment of the famous Corcoran brigade. When Gen. Corcoran returned from his imprisonment in Richmond, he raised the brigade of Irish regiments known as the Corcoran Legion, composed of the 182nd (69th militia), 155th, 164th and I70th N. Y. infantry. The I55th was recruited principally in the counties of New York, Kings, Queens, Broome and Erie and was organized at New York city. The regiment left the state on Nov. 10, 1862, and proceeded to Newport News, where it was mustered into the U. S. service on the 18th for a term of three years. On Jan. 29, 1863, the brigade moved on the Blackwater expedition (Col. Murphy, of the 69th militia, commanding the brigade and Gen. Corcoran the division), and was under fire for the first time in the affair at the Deserted House, suffering a few casualties. In April it was engaged for nearly a month in the defense of Suffolk, where it again sustained some loss, and from July, 1863, to May, 1864, it was stationed near Washington. It then joined Grant's army at Spottsylvania and was assigned to the 4th brigade, 2nd (Gibbon's) division, 2nd corps. The Legion, commanded since the death of Gen. Corcoran in Dec., 1863, by Col. Murphy, arrived in time to take part in the closing battles around Spottsylvania, where the 155th lost 58 killed, wounded and missing. It met with its heaviest loss at Cold Harbor, where it was in the assaulting column, the casualties being 154 killed, wounded and missing. In the battles around Petersburg in June, 1864, it met a loss of 83 killed and wounded. The regiment was only slightly engaged at Strawberry Plains, but was in the hottest of the fight at Reams' station, losing 48 killed, wounded and missing. The heaviest subsequent losses of the regiment were sustained in the battles of Boydton plank road in October and in the assault on the Petersburg works in March, 1865, when its casualties were 20 and 12, respectively. It remained a part of the 2nd brigade, 2nd division, 2nd corps until the end of the war, being present at Farmville and Appomattqx Court House. The regiment was mustered out under Col. Byrne, June 15, 1865, near Washington, D. C. Out of a total enrollment of 830, it lost during service 9 officers and 106 enlisted men killed and mortally wounded—or 13.7 per cent.; 2 officers and 72 enlisted men died of disease and other causes; total deaths, 189, of whom 2 officers and 35 men died in the hands of the enemy. 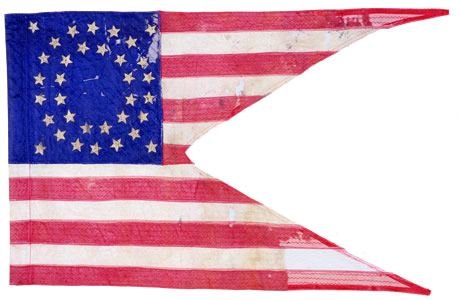 This silk swallowtail guidon conforms to the “stars and stripes” pattern mandated in General Orders No. 4, Headquarters of the U.S. Army, dated…