The following is taken from New York in the War of the Rebellion, 3rd ed. Frederick Phisterer. Albany: J. B. Lyon Company, 1912.
Colonel John H. Ketcham received authority, August 27, 1862, to recruit this regiment, in the then nth Senatorial District of the State; it was organized at Poughkeepsie, and there mustered in the service of the United States for three years October 10 and 11, 1862. December 9, 1863, it received by transfer a portion of the members of the 145th Infantry. June 8, 1865, the men not to be mustered out with the regiment were transferred to the 6oth Infantry.
The companies were recruited principally: A at Poughkeepsie, Amenia, Washington and Pleasant Valley; B at Poughkeepsie; C at Clinton, Stanford, Pleasant Valley, Poughkeepsie and Washington; D at Hyde Park, Pine Plains, North East, Poughkeepsie and Rhinebeck; E at Dover, Pawling and Poughkeepsie; F at Poughkeepsie, Rhinebeck, Red Hook and Milan; G at Poughkeepsie, Beekman, Union Vale and Fishkill; H at Poughkeepsie, Hyde Park and Clinton; I at Washington, Poughkeepsie, Stanford, LaGrange, Amenia and Union Vale; and K at Rhinebeck, Poughkeepsie and Fishkill.
The regiment left the State October 11, 1862; it served in the Middle Department, 8th Corps, at Baltimore, Md., from October, 1862; in the 3d Separate Brigade, 8th Corps, from February, 1863; in the 2d Brigade, 1st Division, 12th Corps, from July 2, 1863; in the 2d Brigade, 1st Division, 2Oth Corps, from April, 1864; and, commanded by Col. Alfred B. Smith, it was honorably discharged and mustered out June 8, 1865, near Washington, D. C.
During its service the regiment lost by death, killed in action, 2 officers, 28 enlisted men; of wounds received in action, 21 enlisted men; of disease and other causes, 3 officers, 78 enlisted men; total, 5 officers, 127 enlisted men; aggregate, 132; of whom 5 enlisted men died in the hands of the enemy.

The following is taken from The Union army: a history of military affairs in the loyal states, 1861-65 -- records of the regiments in the Union army -- cyclopedia of battles -- memoirs of commanders and soldiers. Madison, WI: Federal Pub. Co., 1908. volume II.
One Hundred and Fiftieth Infantry.—Cols., John H. Ketcham Alfred B. Smith; Lieut.-Cols., Charles G. Bartlett, Alfred B. Smith Joseph H. Cogswell; Majs., Alfred B. Smith, Joseph H. Cogswell Henry A. Gildersleeve. .This regiment was from Dutchess cou and was composed of excellent material. It was organized Poughkeepsie, where it was mustered into the U. S. service Oct. 11, 1862, for three years, and when the 145th N. Y. volunteers disbanded in Dec.; 1863, a portion of the members was transferred the 150th. The regiment left the state on Oct. 11, 1862, and perform garrison and guard duty at Baltimore until July, 1863, when it was signed to the 2nd brigade, 1st (Williams') division, 12th corps, with which it marched to the field of Gettysburg, where it fought its 1 battle, losing 45 killed, wounded and missing. In Sept., 1863, the regi-ment went to Tennessee with the 12th corps to join the Army the Cumberland, where Williams' division was stationed along railroad between Murfreesboro and Bridgeport. In April, 1864, I2th corps was designated the 20th. In the same brigade and on, the 150th moved on Sherman's Atlanta campaign about the beginning of May and took an important and honorable part in many of the great battles of that memorable campaign, including esaca, Cassville, Dallas, Kennesaw mountain, Peachtree creek and le siege of Atlanta. The casualties of the regiment aggregated 20 killed and wounded during the 4 months' fighting from Tun-;1 Hill to Atlanta. On Nov. 15, 1864, the regiment started on the arch to the sea with Sherman, and in December was actively en-iged in the siege of Savannah, losing 20 killed, wounded and issing. The following year it embarked on the campaign through the Carolinas, being sharply engaged at the battle of Averasboro and losing a few men at Bentonville. On the close of this cam-lign it marched on to Washington, where it took part in the grand review, and was mustered out there on June 8, 1865, under com-and of Col. Smith. Cols., Ketcham and Smith were both promot-1 to brevet brigadier-general, the former receiving his brevet while suffering from a severe wound received at Atlanta, and he was sub-iquently advanced to the rank of major-general. The regiment had a total enrollment of about 1,300, of whom 2 officers and 49 en were killed and mortally wounded; 3 officers and 78 men died disease and other causes; total deaths, 132. 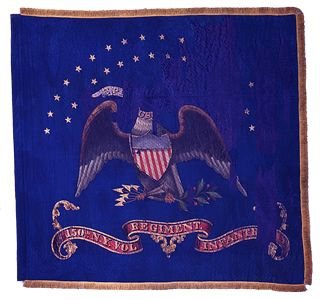 This painted silk Regimental Color carried by the 150th Regiment includes the Arms of the United States with gold-colored stars in two arcs. The lower…

Benton, Charles Edward. As seen from the ranks, a boy in the Civil war, by Charles E. Benton, of the One hundred and fiftieth New York volunteers. . . . New York: G. P. Putnam's Sons, 1902.

Gildersleeve, Henry Alger. "Oration by Henry A. Gildersleeve, delivered on the battlefield of Gettysburg, September 17th, 1889, on the occasion of the dedication of the monument erected to the memory of the soldiers of "The Dutchess county regiment" (150th New York volunteer infantry) who were killed in the battle of Gettysburg."

Lossing, Benson John. Papers,1856-1889.
Papers include a letter, 1856, from Samuel Adams Lee concerning his biography of Henry ("Light Horse Harry") Lee; a letter, 1858, from George Henry Moore, regarding the publication of Charles Lee's papers; a letter, 1865, from Captain William R. Woodin, 150th Regiment, New York Infantry, describing Charleston after its capture by Union troops, and listing documents concerning secession taken from the vacant home of Robert Barnwell Rhett and sent to Lossing; correspondence, 1870s and 1880s, between Lossing and Charles Colcock Jones, concerning the writings and publications of both men; correspondence with Jones and John F. Pickett about the great seal of the Confederate States of America; and a handwritten draft of an article by Lossing, "Castilians in the Land of the Flowers," on Panfilo de Narváez's expedition to Florida in 1527.
18 items.
Located at Duke University.

Plank, Will. Banners and bugles; a record of Ulster County, New York and the mid-Hudson region in the Civil War. Marlborough, N.Y.: Centennial Press, 1972.

Powell, Thomas F.  Thomas Powell papers,1838-1887.
The collection contains Civil War letters and papers, material about the toll road from Watertown, New York, to Watertown Center, New York, and miscellaneous legal and business papers from the Watertown area. The most significant papers are the photocopied letters from Benny T. Murfitt, who was a sergeant in the 150th New York Volunteer Regiment.
7 folders.
Located at the State University of New York at Oswego.