The following is taken from New York in the War of the Rebellion, 3rd ed. Frederick Phisterer. Albany: J. B. Lyon Company, 1912.
July 23, 1862, Col. Peter J. Claassen received authority to raise this regiment, which was finally organized at East New York by consolidating with it the Thurlow Weed Guards, Col. William B. Olmsted, recruiting, as part of the Spinola Brigade, and nearly all the men recruited for the 53d N. Y. Volunteers, second organization; it was mustered in the service of the United States for three years October 4, 1862, at Washington, D. C.; June 15, 1865, the men not to be mustered out with the regiment were transferred to the 99th Infantry.
The companies were recruited principally: A at New York city, Brooklyn and Newtown; B, F, I and K at New York city, Brooklyn and Staten Island; C and E at New York city; D at Brooklyn, Buffalo, Lewiston and the reservations of the Allegany, Cattaraugus and Tuscarora Indians; G at Suspension Bridge, Buffalo, New York city and Brooklyn; and H at New York city, Harlem, Buffalo and Kingston.
The regiment left the State September 27, 1862; it served at and near Washington from September, 1862; at Norfolk, then Suffolk, Va., from October, 1862; in the 1st, Spinola, Brigade, 5th Division, 18th Corps, from December, 1862; in the 2d Brigade, 5th Division, 18th Corps, from March, 1863; unattached, on outpost duty, near New Berne, N. C., from May, 1863; in Palmer's Brigade, Peck's Division, 18th Corps, from January, 1864; in Department of Virginia and North Carolina, from April, 1864; in the Provisional Corps, North Carolina, from March I, 1865; in the 1st Brigade, 2d Division, 23d Corps, from April 2, 1865; at Salisbury, N. C., from May, 1865; and, commanded by Colonel Claassen, it was honorably discharged and mustered out, June 29, 1865, at Salisbury, N. C.
During its service the regiment lost by death, killed in action, I officer, 6 enlisted men ; of wounds received in action, 7 enlisted men; of disease and other causes, I officer, 159 enlisted men; total, 2 officers, 172 enlisted men; aggregate, 174; of whom 71 enlisted men died in the hands of the enemy, and 28 through the accidental explosion of torpedoes at Bachellor's Creek, N. C., May 26, 1864.

The following is taken from The Union army: a history of military affairs in the loyal states, 1861-65 -- records of the regiments in the Union army -- cyclopedia of battles -- memoirs of commanders and soldiers. Madison, WI: Federal Pub. Co., 1908. volume II.
One Hundred and Thirty-second Infantry.—Col., Peter J. Claas-sen; Lieut.-Cols., Charles E. Prescott, George H. Hitchcock; Majs., George H. Hitchcock, John Waller, Jr., John B. Houstain, Thomas B. Green. This regiment, known as the Hillhouse Light Guards, recruited in New York city, Brooklyn and the state at large, was organized at East New York and was mustered into the U. S. service for three years on Oct. 4, 1862, at Washington, D. C. The regiment left the state Sept. 27, 1862, about 900 strong, and spent nearly its entire term of service in North Carolina, engaged in outpost and garrison duty, part of the time unattached and part of the time attached to the 18th corps. A portion of Co. D was composed of Allegany, Cattaraugus and Tuscarora Indians, the 1st lieutenant and 1st sergeant being full-blooded redskins. The regiment took part in the engagements at Pollocksville, Trenton, Young's cross-roads, New Berne, Blount's creek, Sandy ridge, Batchelder's creek, Southwest creek, Jackson's mill, Gardner's bridge, Foster's mills, Butler's bridge, and in the campaign of the Carolinas at Wise's forks, Snow hill, and Bennett's house. The severest loss sustained by the regiment was at the battle of New Berne in Feb., 1864, when it lost 91 in killed, wounded and missing. During this battle, Cos. D, E and G defended the bridge on the Neuse river against three successive attacks of the enemy, but were finally forced to retire when the enemy was reinforced, after 4 hours of hard fighting. The 132nd is credited with saving New Berne from capture on this occasion. Lieut. Arnold Zenette, the only commissioned officer killed, fell in this action. At the battle of Wise's forks the regiment lost 24 in killed, wounded and missing. It was mustered out under Col. Claassen, June 29, 1865, at Salisbury, N. C., having lost by death during service, I officer and 13 enlisted men killed and mortally wounded; I officer and 159 enlisted men died of disease and other causes, a total of 174, of whom 71 died in the hands of the enemy. 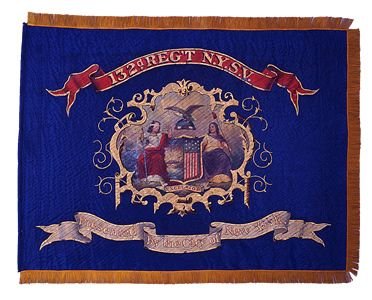 The 132nd Regiment NY Volunteer Infantry received this blue silk regimental color from the City of New York. The flag's obverse features the Arms of… 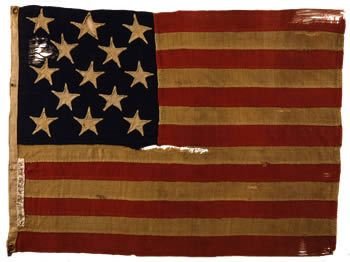 The NYS Battle Flag Collection includes a pair of wool flank markers carried by the 132nd Regiment NY Volunteer Infantry. Both flags are in the US… 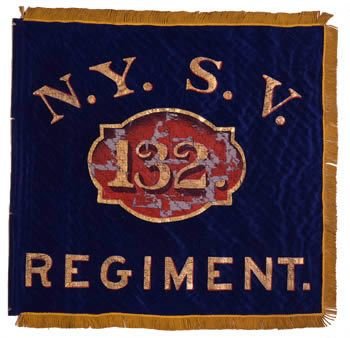 These blue silk flank markers carried by the 132nd Regiment feature painted inscriptions in gold, shadowed in red, along the top and bottom. Also,…

Haring, Abram P.  Abram P. Haring papers,1862-1903 (bulk 1862-1865).
Papers, 1862-1903 (bulk 1862-1865), relating to Haring's service in the 132nd New York Volunteers. Most of them are returns of supplies and ordnance, but there are other miscellaneous official papers, including a commission and a note of sick leave. There are also a notebook in which he wrote messages after he had been wounded in the jaw, and a narrative dated 1903, describing the actions at New Bern (N.C.) for which he was awarded the Medal of Honor.
0.25 linear feet (1 box).
Located at the New York Historical Society, New York, NY.