The following is taken from New York in the War of the Rebellion, 3rd ed. Frederick Phisterer. Albany: J. B. Lyon Company, 1912.
Colonel Simeon Sammons received authority, July 19, 1862, to recruit this regiment in the counties of Fulton, Hamilton, Montgomery and Saratoga, with headquarters at Fonda, where it was organized, and, August 26, 1862, mustered in the service of the United States for three years. The men not to be mustered out with the regiment (301) and a few officers were transferred to the 47th Infantry June 17, 1865.
The companies were recruited principally: A at Fonda, Mohawk, Glen, Palatine, Root and Canajoharie; B at St. Johnsville, Minden, Canajoharie, Fonda, Amsterdam and Florida; C at Milton, Galway, Edinburgh, Clifton Park, Northumberland, Day, Greenfield, Malta and Ballston; D at Amsterdam, Charleston, Florida and Mohawk; E at Johnstown, Mayfield Northampton, Oppenheim, Ephratah and Stratford; F at Saratoga, Corinth, Greenfield, Wilton, Moreau, Northumberland and Hadley; G at Saratoga, Moreau, Greenfield, Corinth, Amsterdam, Charlton, Fonda and Hadley; H at Half moon, Clifton Park, Stillwater, Minden, Waterford and Amsterdam; I at Canajoharie, Fonda, Charlton, Malta, Ballston,. Milton, St. Johnsville and Providence; K at Caroga, Broadalbin, Wells, Johnstown, Mohawk, Amsterdam, Ephratah, Glen and Palatine.
The regiment left the State August 30, 1862; served at and near Sandy Hook, Md., in 8th Corps, from September 1, 1862; at Harper's Ferry, W. Va., where it was surrendered, from September 4, 1862; at Camp Douglas, Chicago, Ill., from September 28, 1862; in Casey's Division, defenses of Washington, D. C., from November 24, 1862; at Hunter's Creek, Va., from December 12, 1862; at Yorktown and Gloucester, Va., in Busteed's Brigade, 4th Corps, from December 28, 1862;. at Port Royal and Hilton Head, S. C., Department of the South, Terry's Brigade, 10th. Corps, from January 26, 1863; at Beaufort, S. C., in Saxton's Brigade, 10th Corps, from June, 1863; at Hilton Head, S. C., from December, 1863; in Barton's Brigade, Seymour's Division, 10th Corps, District of Florida, from January, 1864; in District of Florida, from February, 1864; in 2d Brigade, 2d Division, 10th Corps, Army of the James, from April, 1864; in 1st Brigade, 3d Division, 18th Corps, from May 30, 1864; in 2d Brigade, 2d Division, 10th Corps, from June 15, 1864; in 3d Brigade, same division and corps, from July 26, 1864; in same brigade and division, 24th Corps, from December, 1864; in Provisional Corps, from March, 1865; in 3d Brigade, 2d Division, 10th Corps, from April 2, 1865; and it was honorably discharged and mustered out, commanded by Col. Nathan J. Johnson, June 17, 1865, at Raleigh, N. C.
During its service the regiment lost by death, killed in action, 5 officers, 77 enlisted men; of wounds received in action, 2 officers, 55 enlisted men; of disease and other causes, 191 enlisted men; total, 7 officers, 323 enlisted men; aggregate, 330; of whom 54 enlisted men died in the hands of the enemy; by the explosion of the magazine at Fort Fisher, N. C., January 16, 1865, 10 enlisted men were killed.

The following is taken from The Union army: a history of military affairs in the loyal states, 1861-65 -- records of the regiments in the Union army -- cyclopedia of battles -- memoirs of commanders and soldiers. Madison, WI: Federal Pub. Co., 1908. volume II.
One Hundred and Fifteenth Infantry.—Cols., Simeon Sammons, Nathan J. Johnson; Lieut-Cols., George S. Batcheller, Nathan J. Johnson, Ezra L. Walrath; Majs., Patrick H. Cowam, Ezra L. Walrath, Egbert B. Savage. The 115th, "Iron Hearts," was recruited during July and Aug., 1862, in the counties of Fulton, Hamilton, Montgomery and Saratoga. It was organized at Fonda, where it was mustered into the U. S. service on Aug. 26, 1862, for three years, and left the state on the 30th, proceeding to Sandy Hook, Md., where it received its arms and equipments. Two weeks later it was surrendered with other troops at Harper's Ferry, and after being paroled proceeded to Chicago, 111., to await exchange. During the year 1863 the regiment served at Hilton Head and Beaufort, S. C., whence it:was ordered to Florida, in the latter part of Jan., 1864. It fought gallantly at the battle of Olustee, losing nearly 300 in killed, wounded and missing; nearly all the color-guard being shot down. On April 15, 1864, it embarked for Virginia with the l0th corps, and on its arrival at Fortress Monroe, joined Gen. Butler's Army of the James, with which it participated in the campaign against Richmond in May, via the James river. It was assigned to Barton's (2nd) brigade, Turner's (2nd) division, l0th corps. In the actions at Port Walthall Junction, Chester Station, Ware Bottom Church, Drewry's bluff and Bermuda Hundred, it lost 6 killed, 87 wounded, and 7 missing. While at Cold Harbor, where it lost 18 killed and wounded, it was temporarily attached to the 18th corps, but on its return to the James it rejoined the 10th corps and took position before Petersburg, participating with some loss in the first assault on the works. It was active at the mine explosion, and then recrossing the James, was heavily engaged at Deep Bottom, losing 73 killed, wounded and missing. At Fort Harrison and Fort Gilmer, the 115th lost 33 killed, wounded and missing. During the advance on Richmond by the Darbytown road in October it met with considerable loss from a volley fired into it by the 9th Me. through mistake. When the l0th corps was discontinued in Dec., 1864, the 115th was transferred to the newly formed 24th corps, in Ames' (2nd) division, with which it was ordered to North Carolina. It participated in the capture of Fort Fisher, fighting with Bell's (3d) brigade, and sustaining a considerable part of its loss there by the explosion of the magazine the day after the fort was taken. Subsequently it was present at Cape Fear, Fort Anderson, and Wilmington, and closed its active service in the campaign of the Carolinas. It was mustered out at Raleigh, N. C., under Col. Johnson, June 17, 1865. Out of a total enrollment of 1,196, it lost 7 officers and 132 men; 191 men died of disease and other causes—total deaths, 330. The gallant 115th deserves its place among the three hundred fighting regiments of the war, accorded it by Col. Fox. 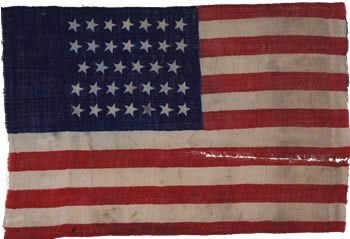 Clark, James H. The iron hearted regiment, being an account of the battles, marches and gallant deeds performed by the 115th regiment N.Y. vols. Also a list of the dead and wounded, an account of hundreds of brave men shot on a score of hard fought fields of strife, a complete statement of Harper's Ferry surrender, sketches of the officers, a history of the flags and those who bore them, together with touching incidents, thrilling adventures, amusing scenes ... by James H. Clark, late First Lieutenant, Company H, 115th N.Y.V. Albany: J. Munsell, 1865. Full-text of the book is here

Foote, Melville B. Diary, 1864 - 1865.
Transcription only. Donated by Julia A. Foote.
A narrative of his military record is here.

Kline, Charles. Civil War letters, 1862-1864.
Description: 49 items.
Abstract: Letters are chiefly photocopies of a typewritten transcript of Kline's letters but also include one photocopied letter (1864) written for the wounded Kline by an unnamed person at the U.S. General Hospital at Fort Monroe (Va.). Letters from "Charley" are to his family concerning his service in Virginia (1862), his capture at Harper's Ferry, and life as a prisoner of war while awaiting parole and exchange at Annapolis (Md.) and Camp Douglas (Chicago, Ill.). Letters (1863) detail his removal to Hilton Head Island (S.C.), and include descriptions of the island, Beaufort (S.C.), camp life, construction at Fort Mitchell (near Hilton Head), with references to gunboats, Fort Walker, Fort Pulaski, and the Battle of Charleston. Letters (1864) describe his service near Petersburg (Va.) and other areas in northern Virginia, and make mention of Kline's glimpse of President Abraham Lincoln.
Originals located at the South Carolina Historical Society.

Pedrick, Benjamin. Papers, 1862-1864.
31 items.
Abstract: Letters of Pedrick to his parents, Benjamin and Mary A. Pedrick and to his brother, Nelson Pedrick, commenting on personal matters, camp life, the presidential election of 1864, Copperheads in New York, blacks, generals Ulysses S. Grant and Quincy Adams Gillmore, and the activities of his regiment in Virginia and Florida and on the coastal islands of South Carolina.
Originals located at Duke University.

Vosburgh, Wash.  Wash Vosburgh papers,1862-1866.
Letters to his friend Ella describing his military experience, including service in coastal South Carolina and Florida and in the battle of Cold Harbor and siege of Petersburg. The collection also includes several letters written (1865-1866) from the oil fields of Titusville, Pa., where Vosburgh was a merchant. 1 linear ft.
Located at Bentley Historical Library, University of Michigan.