The following is taken from New York in the War of the Rebellion, 3rd ed. Frederick Phisterer. Albany: J. B. Lyon Company, 1912.
This organization, the Naval Brigade, was recruited by Col. William A. Bartlett in New York city, under authority from the War Department, dated May 22, 1861, recruiting having been commenced as early as April, 1861. The band and Companies G, H, I and K were formed principally of men from Massachusetts; Companies A, B, C (Red Banks, N. J.) D and E also contained men from Massachusetts. The brigade was to be provided with gunboats and to cruise along the Atlantic coast. May 14, 1861, six companies were mustered in the State service, and the regiment left the State May 28, 1861. On reporting to Major-General Butler, at Fort Monroe, Va., for duty and muster in the United States service, it was not accepted by that officer. Colonel Bartlett meeting with a serious accident, the command lost strength, and finally was organized as a regiment of infantry with David W. Wardrop as Colonel, in accordance with War Department orders, dated August 21, 1861. Eight companies were mustered in the service of the United States, for three years, June 14, August 2 and 31, October 30 and 31, 1861. Company I was organized September 30, 1861, and K March 7, 1862. The regiment was turned over to the State in September, 1861, and received its numerical designation in January, 1862. June 14, 1864, the men entitled to be discharged by reason of the expiration of their term of enlistment were mustered out, and the regiment retained in service, but consolidated into four companies, A, B, C and D. These were consolidated into three companies, A, B and C, September 15, 1864, and these into two companies, A and B, in February, 1865. June 15, 1865, the men of the 132d Infantry, not mustered out with their regiment, were assigned to these two companies.
The regiment served at and near Fort Monroe, Va., from May, 1861; Company B with General Burnside's forces on the steamers Southfield and Hunchback, from August, 1861; Company D on the U. S. frigate Congress, in March, 1862; the regiment in Robinson's Brigade, Department Virginia, from May, 1862; at Fort Monroe, Norfolk, Fort Wool, Sewell's Point, Va., in detachments, from August, 1862; at Norfolk, Va., except Company I, from October, 1862; Company I, in detachments, on the army gunboats West End and Smith Briggs, from August, 1862; the regiment at Suffolk, Va., in Terry's Brigade, Peck's Division, 7th Corps, from March, 1863; in the Reserve Brigade, same division and corps, from April, 1863; in Wistar's Brigade, Department of Virginia, at the White House, Va., in June, 1863; at Yorktown, Va., in July, 1863; at Gloucester, Va., in August, 1863; at and near New Berne, N. C, 18th Corps, from October, 1863; in Palmer's Brigade, Peck's Division, 18th Corps, from January, 1864; in the District of North Carolina, from April, 1864; in Carter's Division, Provisional Corps, from March, 1865; in the 1st Brigade, 2d Division, 23d Corps, from April 2, 1865; and it was honorably discharged and mustered out, under Capt. Ervin A. Jones, July 15, 1865, at Salisbury, N. C.
During its service the regiment lost by death, killed in action, 2 officers, 27 enlisted men; of wounds received in action, 11 enlisted men; of disease and other causes, 3 officers, 161 enlisted men; total, 5 officers, 199 enlisted men; aggregate, 204; of whom 71 enlisted men died in the hands of the enemy.

The following is taken from The Union army: a history of military affairs in the loyal states, 1861-65 -- records of the regiments in the Union army -- cyclopedia of battles -- memoirs of commanders and soldiers. Madison, WI: Federal Pub. Co., 1908.
Ninety-ninth Infantry.—Col., David W. Wardrop; Lieut.-Cols., Gus-tave B. Helleday, Richard Nixon; Majs., Richard Nixon, John Franklin Bates, T. Edward Rawlings. The 99th known as the Union coast guard, or Bartlett's naval brigade, was organized early in the war in New York city, and was mustered into the state service (six companies) May 14, 1861. The brigade was to be provided with gunboats and cruise along the Atlantic coast. The organization left the state May 28, 1861, proceeding to Fortress Monroe, Va., where it reported to Maj.-Gen. Butler for duty, but was not ac-cepted by that officer. In Aug., 1861, it was reorganized as a regiment of infantry by order of the war department, and eight companies were mustered into the U. S. service between June 14 and Oct. 21, 1861, for three years: Two more companies were organized in Sept., 1861, and March, 1862, and on June 14, 1864, on the expi-. ration of its term of service the original members (except veterans) were mustered out, the veterans and recruits being consolidated into a battalion of four companies, A, B, C and D. These were consolidated into three companies, Sept. 15, 1864; and finally into two companies in Feb., 1865. A detachment of the regiment, op-erating as a coast guard, participated in a skirmish near New Mar-ket, bridge, Va., in July, 1861, losing 6 killed arid wounded, Maj. Rawlings being killed in this action. Detachments also took part in the skirmishes at Fletcher's wharf, on the Pocomoco. and at Cherry Stone inlet, Va., the capture of Forts Clark and Hatteras, Hatteras inlet, and a skirmish at Beacon island, N. C. On the steamers Southfield and Hunchback, Co. B formed part of Burn-side's forces, and accompanied the expedition of that general to North Carolina in Feb., 1862, taking part in the battle of Roanoke island, and the action at Elizabeth City; Co. D, on the U. S. frigate Congress, took part in the naval engagement in Hampton Roads, in March, 1862, losing 2 killed and 5 wounded. Co. B was again in action at New Berne, where it lost 19 killed, wounded and miss-iftg, and in April, 1862, assisted in the siege and capture of Fort Macon, N. C. A part of the regiment participated in the skirmish at Tranter's creek, and the occupation of Norfolk, Va., and Co. I, on the steamer C. P. Smith, skirmished near Windsor Shade, Chick-ahominy river, Va., and ion the James river, near Harrison's land-ing. During the latter part of 1862, and until March, 1863, the regi-m'ent (except Co. I, on the gunboats West End and Smith Briggs) served by detachments at Fortress Monroe, Norfolk, Fort Wool and- Sewall's point, Va. In the spring of 1863, it took an active part in the defense of Suffolk, during which Co. I suffered severely in the attack on the steamer Smith Briggs, and the regiment met with further losses in the skirmishes on the South Quay road and at South Quay bridge. The casualties during the siege aggregated 71 killed and wounded. It was at this time attached to the re-serve brigade, Peck's division, 7th corps, and afterwards served in Wistar's brigade, Department of Virginia, at the White House, Yorktown and Gloucester. In May it skirmished at Antioch Church arid Baker's cross-roads, Va., and in June at Franklin, Va. Detachments were also engaged at Walkerstown, Va., and at South Anna Bridge. In Oct., 1863, the regiment was ordered to New Berne, N. C., arid attached to the 18th corps and from Jan. to April, 1864, was in Palmer's brigade, Peck's division, 18th corps. It sustained a loss of several men captured in the affair at Smithfield, Va., in Jan., 1864, and met with a further loss of 54 men during the attack on New Berne, in February. The regiment, now consolidated into a veteran battalion, continued to serve in North Carolina, taking part in a skirmish at Beech Grove, and closed its active service by. embarking on the campaign of the Carolinas in 1865, as a part of Carter's division, provisional corps, afterwards in the 1st brigade, and division, 23d corps. It was present at Johnston's surrender, and was finally mustered out, July 15, 1865, at Salisbury, N. C. The regiment lost during its term of service, 2 officers, 37 enlisted men, killed and mortally wounded; 3 officers, 161 enlisted men died of disease and other causes; total deaths, 203; of these, 71 enlisted men died in the hands of the enemy. 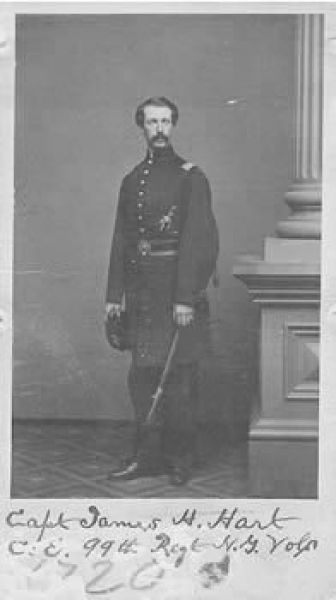 Corell, Philip. History of the Naval brigade, 99th N.Y. volunteers, Union coast guard, 1861-1865. Historian, Philip Corell. Published under the auspices of the Regimental veteran association. New York, 1905. [A collection of 28 articles assembled with a title page and table of contents and bound. The letter of presentation in NHi's copy has a statement that "only 73 copies of the history were bound." On spine: 99th reg't N.Y.S. vol. infantry. War reminiscences. Unit roster included.]

Corell, Philip. Diaries, 1862-1866.
These diaries begin January, 1862 and conclude in 1866. The diaries record personal observations of military life during the war and of specific compaigns in which Correll was involved. Also mentioned are events after the war including Lincoln's assassination and the surrender of Johnson. 5 volumes.
Located at the New York State Library Manuscripts and Special Collections.

Heath, Alfred H.  Civil War materials, 1858-1908 (bulk 1863-1865).
Manuscript Materials: 2 document cases, 1 oversize manuscript box, 10 oversize manuscript folders in flat files. Artifacts: 7 artifacts.
The collection consists mainly of Civil War materials for the 99th Indiana Infantry Regiment. There are mustering rolls, correspondence, quartermaster records, and artifacts. Of particular interest is a letter dated 7 March 1863 indicating that "contrabands" or fugitive slaves within the lines were to be mustered into the Pioneer Corps to perform fatigue duty. There are also names of "contraband" laborers included on the clothing receipt rolls for March to April 1865.
Located at the Indiana Historical Society.

Mendenhall, John B. The second Peninsula campaign and its connection with the battle of Gettysburg. [189-].
In Corell's History of the Naval brigade.

Stetson, William M. 99th New York Infantry, Co. B. Diary (1861-1864).
This volume provides a detailed record of Stetson's experiences and activities of military service during the Civil War. It includes a description of the naval battle between the Monitor and the Merrimac. Also includes information about the U.S. Navy blockade of principal Southern seaports.
Located at the New York State Library Manuscripts and Special Collections.