The following is taken from The Union army: a history of military affairs in the loyal states, 1861-65 -- records of the regiments in the Union army -- cyclopedia of battles -- memoirs of commanders and soldiers. Madison, WI: Federal Pub. Co., 1908. volume II.
Ninety-fourth Infantry.—Cols., Henry K. Viele, Adrian R. Root; Lieut.-Cols., Colvin Littlefield, John A. Kress, Samuel Moffatt; Majs., William R. Hanford, John A. Kress, D. C. Tomlinson, Sam-uel S. Moffatt, John A. McMahon, Henry P. Fish, Byron Parsons. The 94th, the "Bell Rifles." recruited in Jefferson county, was mustered into the U. S. service at Sacket's Harbor, March 10, 1862, and left the state for Washington on the 18th. It served in the defenses of Washington under Gen. Wadsworth, was assigned to the 1st brigade, 2nd division, Department of the Rappahannock in May, and to the 3d corps, Army of Virginia, June 26, with which it participated in Gen. Pope's Virginia campaign, losing 147 in killed, wounded and missing. On Sept. 12, with the same brigade, and division, the regiment was attached to the 1st corps, was active at South mountain and Antietam, and in December at Fredericksburg. The winter was passed in camp near Falmouth and in March, 1863; the regiment was consolidated into a battalion of five companies, to which were added five companies of the l05th N. Y. infantry. The regiment served for a month as provost guard and in June, 1863, returned to the 1st corps with its old brigade and division, and suffered the heaviest loss of its service at Gettysburg-245 killed, wounded or missing. It shared in the Mine Run fiasco and in December was ordered to Annapolis, where it became a part of the 8th corps. During the winter a large number of its members reenlisted and the regiment continued in service as a veteran organization. In the Wilderness campaign it served with the 5th corps, being engaged at Cold Harbor, Totopotomy and White Oak swamp. It moved with the Army of the Potomac to Petersburg and was closely engaged at the Weldon railroad, losing 178 killed, wounded or missing. On Aug. 10, 1864, the regiment was joined by the veterans and recruits of the 97th N. Y. infantry and remained on duty before Petersburg until the end of the siege, after which it was active at Five Forks, and was present at Lee's surrender. The 94th was mustered out at Washington, July 18; 1865, having lost 116 by death from wounds and 138 from other causes, of whom 37 died in imprisonment. Maj. Fish was killed in action at Five Forks. 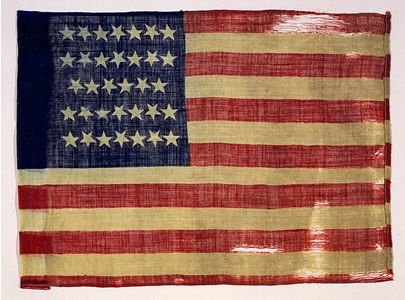 Haddock, John. Growth of a century: as illustrated in the History of Jefferson County. Philadelphia: Sherman & co., 1894.

Heath, H. The Lord's prayer. Petersburg, Virginia: s.n., 1864.
A commemorative card with the Lord's Prayer printed in miniature type within a circle with floral border; "H. Heath, artist" below circle. Additional decorations of an eagle and a fish.
Located at the Buffalo and Erie County Historical Society.

Root, Adrian R. Letters : to his mother, 1860 Oct. 4-1871 July 26.
16 folders (164 items) (0.5 linear ft.).
Letters describe camp life, marches, battles, and his increasing dissatisfaction with the conduct of the war. Also, letters written while on a trip to California, Apr.-July 1871, with stops in Utah, Nevada, and Wyoming.
Located at the Buffalo and Erie County Historical Society.

Root, Adrian. General Order (May 21, 1863).
1 item.
Collection Call Number: 12183.
A photocopy of Colonel Root's farewell address to his troops while encamped near White Oak Chapel, Virginia. This document was issued as General Order No. 36.
Located at the New York State Library Manuscripts and Special Collections.

Taber, Lemuel Moore. Letter, 2 May 1864.
2 pages.
Letter, 2 May 1864, from Lemuel M. Taber (b. 1844) of Company A, 94th New York Infantry Regiment, to James discussing his return to his company after being gone because of wounds received. Taber discusses problems he is having with his leg.
Accession 50667. Located at the Library of Virginia in Richmond, Virginia.
Thank you to Ed Worman for pointing out this resource.

Webb, William. Letter, 11 August 1864.
4 pages.
Letter, 11 August 1864, from William Webb of Company C, 94th New York Infantry, in front of Petersburg, Virginia, to his friend James, detailing picket duty and camp life in the trenches of Petersburg, discussing his plans to leave the army when his enlistment is up and the number of soldiers left in his company, and asking for news.
Accession 50672. Located at the Library of Virginia in Richmond, Virginia.
Thank you to Ed Worman for pointing out this resource.