The following is taken from New York in the War of the Rebellion, 3rd ed. Frederick Phisterer. Albany: J. B. Lyon Company, 1912.
This regiment, Col. John S. Crocker, was organized at Albany February 1, 1862, by adding to the companies recruited by him those recruited by Maj. B. C. Butler for a battalion of sharpshooters, A, B, C and D, and one company, E, originally recruited for the 76th Infantry. Major B. C. Butler had received authority from the War Department, August 14, 1861, to recruit four battalions of sharpshooters. The regiment was mustered in the United States service for three years between October, 1861, and January, 1862. In June, 1863, some of the three years' men of the 22d Infantry were transferred to this. At the expiration of its term of enlistment the men entitled thereto were discharged and the regiment continued in service, but consolidated in November and December, 1864, into seven companies, A, C, D, E, F, Hand 1. June 2, 1865, the men of the 124th Infantry, not mustered out with their regiment, were transferred to this.
The companies were recruited principally: A at Chester; B Hobart's Company, 2d United States Sharpshooters at Albany; C at Minerva; D at North Hamden; E at Cortland Village; F at Fort Edward; G at Cambridge; H at Boston [sic: should be Bolton]; I at Argyle, and K at Troy.
The regiment left the State March 7, 1862; served in Palmer's Brigade, Casey's Division, 4th Corps, Army of the Potomac, from March, 1862; Companies B, C, D, E, G and I at the White House, Va., the other companies as Provost Guard, Army of the Potomac, from May 19, 1862; the regiment, as such, from July, 1862; in 2d Brigade, 3d Division, 2d Corps, Army of the Potomac, from March, 1864, and it was honorably discharged and mustered out, under Col. Haviland Gifford, June 29, 1865, near Washington, D. C.
During its service the regiment lost by death, killed in action, 6 officers, 78 enlisted men; of wounds received in action, 1 officer, 43 enlisted men; of disease and other causes, 2 officers, 141 enlisted men; total, 9 officers, 262 enlisted men; aggregate, 271; of whom 1 officer. 22 enlisted men, died in the hands of the enemy.

The following is taken from The Union army: a history of military affairs in the loyal states, 1861-65 -- records of the regiments in the Union army -- cyclopedia of battles -- memoirs of commanders and soldiers. Madison, WI: Federal Pub. Co., 1908. volume II.
Ninety-third Infantry.—Cols., John S. Crocker, Samuel McCon-ihe, Haviland Gifford; Lieut.-Cols., Benjamin C. Butler, Haviland Gifford, Jay H. Northrup; Majs., Ambrose S. Cassidy, Samuel Mc-Conihe, Henry P. Smith, Jay H. Northrup, George Bushnell. The 93d, the '"Morgan Rifles," recruited mainly in Washington county, was mustered into the service of the United States at Albany, from Oct., 1861, to Jan., 1862. It left Albany, Feb. 14, 1862, with 998 members; camped at Riker's island, New York city; moved to Washington on March 7; was there attached to Palmer's brigade, Casey's division and proceeded to the Peninsula on March 30. It was present at the siege of Yorktown; fought at Lee's mills, Will-iamsburg and in the Seven Days' battles; and upon the return from the Peninsula was present at Antietam and Fredericksburg, but was not actively engaged, having been detailed to perform provost guard duty at headquarters, a post occupied by the regiment for about two years. At the opening of the Wilderness campaign, the regiment, of which a large proportion had reenlisted, was assigned to the 2nd brigade, 3d division, 2nd corps, and showed its fighting mettle at the Wilderness, where it lost 258 killed or wounded out of 433 engaged. It was constantly in action during the battles of that month; at Cold Harbor in June, and upon the arrival of the army at Petersburg, joined in the first assault, followed by engagements at the Weldon railroad, Deep Bottom, Strawberry Plains, Poplar Spring Church, the Boydton road, Hatcher's run and in the Appomattox campaign. The regiment remained at Petersburg until the end of the siege and constantly displayed such gallantry in action and reliability in the performance of every duty that it well deserved the reputation won as an unusually well-trained, efficient command and as a "fighting regiment." It lost during the term of service 128 by death from wounds and 143 by death from other causes. 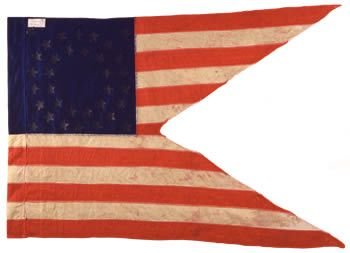 Allen, Stewart C.  Correspondence. 1862-1865.
16 items.
Correspondence primarily written by Allen from various locations in Virginia and elsewhere to his mother and sister, probably in Hudson, N.Y. (July 1862-Feb. 1865). His letters often express frustration about having been forgotten by those at home who don't write or send much needed supplies. Includes one letter from E.S. Corser, Allen's former commanding officer, to Allen (Mar. 3, 1865).
Located at the New York Historical Society, New York, NY.

Braman, Waters Whipple. Letters, 1863-1865.
2 boxes (.50 cu. ft.).
Group of letters addressed to family and relatives at Troy, New York, concerning battle campaigns of Antietam, Williamsburg, Fredericksburg, Gettysburg, Wilderness, Spotsylvania, North Anna River, and Petersburg Crater. His descriptions noted the positions and maneuvers of troops as well as the unit involved in a particular engagement and the names of commanding officers. Also included are many candid observations about the personal conduct of officers as well as life in the officers' quarters.
Located at the New York State Library Manuscripts and Special Collections.

Corser, Elwood Spencer. "A day with the Confederates." MOLLUS-Minn IV 364-78.

Corser, Elwood Spencer. Record of the life of Elwood Spencer Corser of John A. Rawlins post no. 126 written for the records of the Post. Minneapolis: W. F. Black & co., printers, 1911.

Crocker, John S. Correspondence of Gen. John S. Crocker. 1843-1890.
30 items.
The collection consists chiefly of letters between Crocker and his wife Harriet Gorham Sipperly Crocker. The majority of the letters convey family news. Of interest is Crocker's description of his conversion to Christianity; his 1859 trip to Washington, D.C., and meeting with Senator David C. Broderick; and the death of a daughter from typhoid. Few of Crocker's letters have Civil War content though one of 1862 August 20, announces his release from Libby Prison but does not describe his stay there except for a brief reference to rotten meat. An 1864 letter from Harriet Crocker mentions a local doctor who has acquired a contraband servant and complains about war-time parties. The collection also contains a copy of a sketch of Crocker from the Washington, D.C. Daily Critic, April 3, 1882; and three legal documents pertaining to his will and the settlement of his estate.
Located at the New York State Library Manuscripts and Special Collections.

Wilson, Edgar T. Letter, March 7, 1863.
2 p. letter from Wilson to his sister joking about how sorry he is that his time in the army is almost up. He is writing from the camp of the 93rd New York Infantry where his relative Hiram S. Wilson, mentioned in the letter, is a captain.
Located at the Abraham Lincoln Presidential Library.

Wilson, Hiram Sickles. Letters (1861-1863).
44 items.
Letters sent to Wilson's wife from various army camps in Virginia and Maryland, mostly in regards to his opinions of Union Army generals such as Burnside, Hooker, Meade and McClellan.
Located at the New York State Library Manuscripts and Special Collections.