Mustered in: October to December, 1861
Consolidated with 40th regiment of infantry: September 6, 1862

The following is taken from New York in the War of the Rebellion, 3rd ed. Frederick Phisterer. Albany: J. B. Lyon Company, 1912.
This regiment, Col. Stephen A. Dodge, was organized at Brooklyn November 14, 1861, by the consolidation of several incomplete organizations with the Brooklyn Rifles; which latter, organized by Colonel Dodge, consisted of eight companies and formed Companies A, D, F, G, H, I and K of the new organization; the Second Continental Guards, Colonel Perry, of three companies, A, G and H, formed Company C; and Company E of the McClellan Infantry, Col. Simon Levy, which formed Company E of the regiment. Part of the Washington Rifles or Zouaves, Colonel Romain, were merged into the regiment, and the nucleus of the Brooklyn Rifles were members of the 13th Militia. The regiment was mustered in the service of the United States for three years between October and December, 1861. Captain Dobb's company, then newly recruited and joined, to be Company B, was, September 11, 1862, assigned to the 173d Infantry.
The companies were recruited principally: A at Dresden, Whitehall and New York city; B and C at Brooklyn and Williamsburg; D at Brooklyn and New York city; E at New York city; F at Brooklyn and Poughkeepsie; G at Brooklyn, New York city and Poughkeepsie; H at Brooklyn; I and K at Williamsburg and New York city.
The regiment left the State December 2, 1861; served in the 3d Brigade, Casey's Division, Army of the Potomac, from December, 1861; in 1st, Jamison's, Brigade, 3d, Hamilton's, Division, 3d Corps, Army of the Potomac, from March, 1862; and, commanded by Colonel Dodge, it was transferred to and consolidated with the 40th N.Y. Volunteers, September 6, 1862.
During its service the regiment lost by death, killed in action, 1 officer, 19 enlisted men; of wounds received in action, 9 enlisted men; of disease and other causes, 26 enlisted men; total, I officer, 54 enlisted men; aggregate, 55; of whom 1 enlisted man died in the hands of the enemy.

The following is taken from The Union army: a history of military affairs in the loyal states, 1861-65 -- records of the regiments in the Union army -- cyclopedia of battles -- memoirs of commanders and soldiers. Madison, WI: Federal Pub. Co., 1908. volume II.
Eighty-seventh Infantry.—Col., Stephen A. Dodge; Lieut.-Col., Richard A. Bachia; Maj., George B. Bosworth. The 87th, the 13th Brooklyn, recruited mainly in Brooklyn, New York city, Williams-burg and Poughkeepsie, was mustered into the U. S. service from Oct. to Dec., 1861, for three years, and left New York for Washington on Dec. 2. It served at Washington and vicinity in the 3d brigade, Casey's division, until March, 1862, when, with the 1st brigade, 3d division, 3d corps, it embarked for the Peninsula. It participated in siege duties before Yorktown; was present at the battle of Williamsburg; suffered its first losses at Fair Oaks, where 76 were killed, wounded or captured; was active during the Seven Days' battles, and upon the return of the army from the Peninsula, joined in Gen. Pope's Virginia campaign, where it suffered a loss of 68. On Sept. 6, 1862, the regiment was consolidated with the 40th N. Y. infantry, in which organization its members completed their term of service. The 87th lost 29 by death from wounds and 26 from other causes. 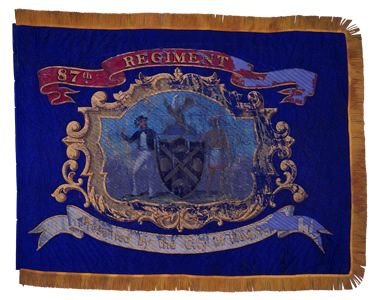 The 87th Regiment, or “Brooklyn Rifles,” mustered into service for three years between October and December 1861. On Sept. 6, 1862, the regiment…

Tanner, James. "Experiences of a wounded soldier at the second battle of Bull run, by James Tanner." Reprinted from Military surgeon for February 1927. 121-39.

Tanner, James. Reminiscence, ca. 1909.
Description: 6 p.
Language: English
Abstract: Account, written about 1909, describes experiences taking notes on the testimony of those who saw Lincoln assassinated, as well as observing other people in the Peterson House, and Lincoln's death.
Note(s): Tanner served as a corporal in Company C, 87th New York Infantry from September 1861 until he was wounded in both legs at the Battle of 2nd Manassas (August 1862) and had to have them amputated. He learned shorthand and, as a result, took testimony from the witnesses to Abraham Lincoln's assassination (April 14-15, 1865). After the war he became a lawyer and held a number of appointive offices.
Preferred citation: James Tanner Reminiscence, Abraham Lincoln Presidential Library.