The following is taken from The Union army: a history of military affairs in the loyal states, 1861-65 -- records of the regiments in the Union army -- cyclopedia of battles -- memoirs of commanders and soldiers. Madison, WI: Federal Pub. Co., 1908. volume II.
Eighty-third Infantry.—Cols., John W. Stiles, John Hendrickson, Joseph A. Moesch; Lieut.-Cols., William H. Halleck, William At-terbury, Allen Rutherford, John Hendrickson, Joseph A. Moesch, William Chalmers; Majs., William Atterbury, Allen Rutherford, John Hendrickson, Dabney W. Diggs, Henry V. Williamson. The 83d (the 9th militia), was recruited in New York city and left the state for. Washington, May 27, 1861. It was there mustered into the service of the United States for a three years' term, June 8, and served in Col. Stone's command, in Hamilton's and Stiles' brigades, along the Potomac in Maryland and at Harper's Ferry. In the spring of 1862 the regiment was stationed near Warrenton Junction and along the Rappahannock river with several different assignments and participated in Gen. Pope's Virginia campaign with the 3d brigade, 2nd division, 3d corps, suffering the loss of 75 members at the second Bull Run. The brigade and division were transferred to the 1st corps on Sept. 12, fought at South mountain and Antietam, the regiment being closely engaged in both battles and losing 114 at Antietam. The next battle was Fredericksburg, where the crippled command suffered even more severely—125 killed, wounded or missing—among whom was Col. Hendrickson, who was severely wounded. The regiment passed the winter at Falmouth; was not in an exposed position during the Chancellors-ville movement and battle of May, 1863, but played an important part at Gettysburg in the capture of Iverson's North Carolina brigade. On the southward march the regiment was stationed at Ha-gerstown, Md., and Liberty, Va.; then participated in the Mine Run campaign, and established camp near Brandy Station in the early winter. During the Wilderness campaign it served in the 2nd brigade, 2nd division, 5th corps, and the 2nd brigade, 3d division, 5th corps, until June 7, when the term of service expired. Col. Moesch was killed in the Wilderness and 128 men were reported killed, wounded or missing. The original members not reenlisted were mustered out at New York, June 23, 1864, and the veterans were transferred to the 97th N. Y. infantry. The 83d is named by Col. Fox as one of the "three hundred fighting regiments." Out of a total enrollment of 1,413 it lost during service 164 by death from wounds and 91 from other causes. 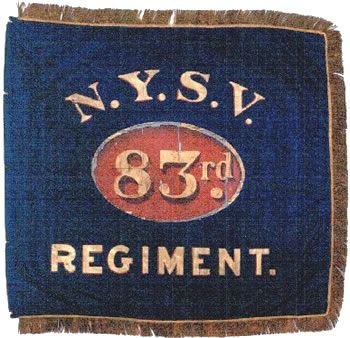 This blue silk flank marker features painted inscriptions in gold, shadowed in red, along the top and bottom. The regiment’s numeric designation, in…

Keyes, Leonhard A. Lineage of the Ninth Regiment of the State of New York. New York:244th Anti-aircraft Artillery Group, 1953.

Penny Family, (Elijah, Alfred, and Archibald Penny). Papers (1861-1865).
Description: 1 box (.25 cu. ft.).
Abstract: These papers are comprised chiefly of letters written by three members of the Penny family all of whom served in the U.S. Army during the Civil War. Generally, these letters relate mostly to their experiences of life in army camps, and various routine activities such as drill and picket duty. Finding aid available.
Located at the New York State Library Manuscripts and Special Collections.

Potter, Orlando Brunson. "Oration of Orlando B. Potter on the dedication of the monument erected by the Ninth regiment, N.G.S.N.Y. Eighty-third volunteers, Sunday, July 1st, 1888, at Gettysburg, Pennsylvania."

Prince, William R. Papers (1862-1867).
Description: 13 Items
Abstract: These papers include letters and various official documents relating to Prince's military service. One of the letters discusses the Battle of Antietam, where he was wounded in action.
Located at the New York State Library Manuscripts and Special Collections.