Seventy-sixth Infantry.—Cols., Nelson W. Green, W. P. Wain-wright, Charles E. Livingston; Lieut.-Cols., John D. Shaul, Charles E. Livingston, Andrew J. Grover, John E. Cook, Charles A. Wat-kins; Majs., Charles E. Livingston, Andrew J. Grover, John E. Cook, John W. Young. The 76th, the "Cortland Regiment," recruited principally in Cortland and Otsego counties, was mustered into the U. S. service at Albany, Jan. 16, 1862, for three years. It left the state the next day for Washington, was assigned to the 3d brigade of Casey's division and served in the vicinity of Washington during the first winter. It suffered its first severe loss at Manassas in Aug., 1862, when it served with the 2nd brigade, 1st division, 3d corps, losing in the several engagements of Gen. Pope's campaign, 147 in killed, wounded and missing. It was active at South mountain and Antietam, its brigade and division having been assigned to the 1st corps, with which it accompanied the cavalry advance through Philomont, Union and Upperville, Va. It participated in the battle of Fredericksburg, went into winter quarters near Fal-mouth and during the Chancellorsville movement, lost 3 men while guarding bridges. At Gettysburg the regiment took a prominent part and suffered the loss of 234 in killed, wounded and missing. Previous to this battle the ranks had been reinforced by the addition of the veterans and recruits of the 24th and 30th N. Y. infan-try, but after Gettysburg they were again sadly thinned. The regiment participated in the Mine Run fiasco, and at Brandy Station in Jan., 1864, was transferred to the 1st brigade of the same division, returning to its old brigade in March, and was later assigned to the 2nd brigade, 4th division, 5th corps, and broke camp in April for the Wilderness campaign, in which it suffered its greatest loss during the first two days—282 killed, wounded or missing. It continued to see hard service at Spottsylvania, the North Anna, Toto-potomoy, Cold Harbor and Petersburg, where it took part in the siege operations until the end of its term of service. It was mustered out by companies, July I, Oct. II and 20, Nov. 8 and 18, Dec. 1, 1864, and Jan. 1, 1865, the veterans and recruits being transferred to the 147th N. Y. infantry. The regiment lost during its term of service 175 by death from wounds and 166 by death from accident, imprisonment or disease, of whom 56 died in imprisonment. It ranks among the "three hundred fighting regiments." 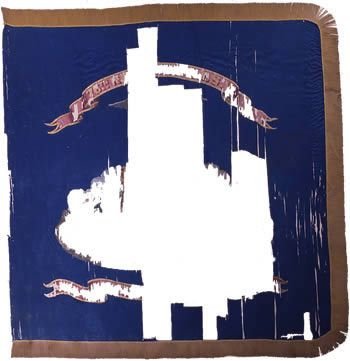 S.R. Campbell, on behalf of his mother, Mrs. Samuel Campbell of New York Mills, presented a stand of colors, believed to have included this flag, to… 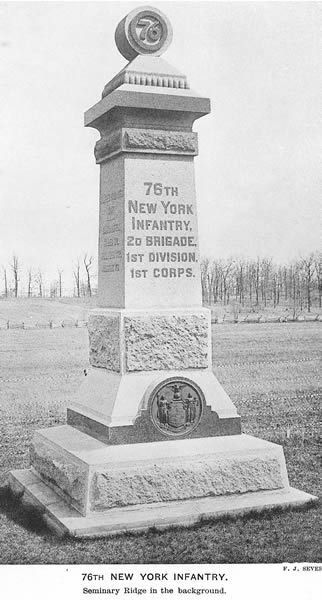 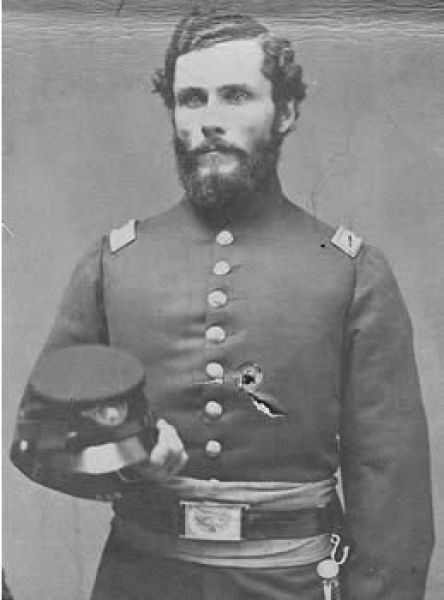 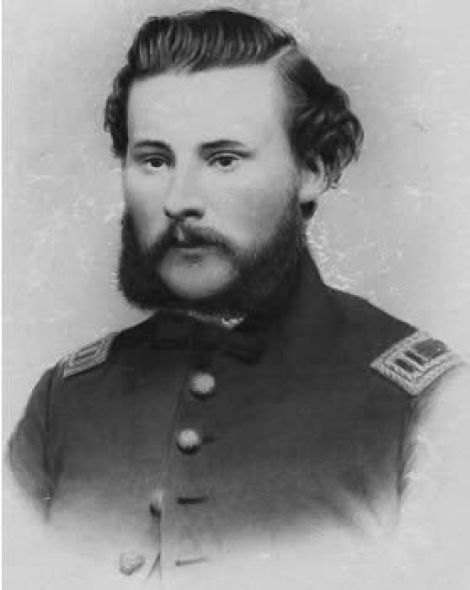 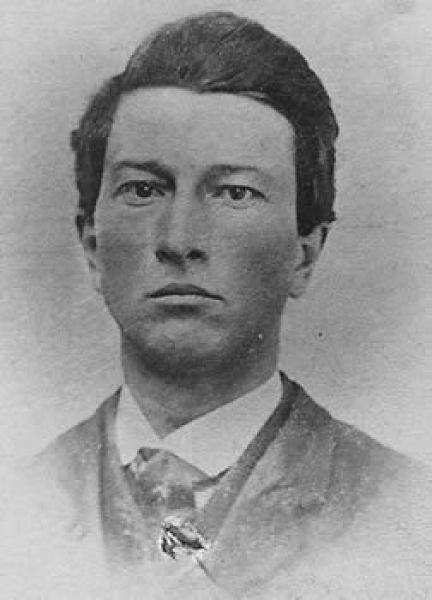 Burnham, Uberto Adalbert. Papers (1857-1928)
Description: 2 boxes (.75 cu. ft.).
Abstract: These papers are comprised chiefly of letters sent to Burnham's parents with details of action he witnessed at 2nd Battle of Bull Run, Fredericksburg and Gettysburg. Also includes many anecdotes about political and military leaders. Other papers include pocket diaries for 1863 and 1864 and a financial account book for equipment and supplies purchased by the 76th Regiment.
Located at the New York State Library Manuscripts and Special Collections.

Clarke, Martin. [Diary and letters of Martin Clark].
Clark was from Mitchellsville, Steuben County, N.Y., who volunteered to join the 76th Regiment in July, 1863, and then served with the UInion Army through the final battle at Appomattox Courthouse.
Located at the Steuben County Historical Society located on West Morris St., Bath, N. Y.
Resource suggested by G. A. Mathewson, Esq.

Hall, E. George. Civil War diary, 1903.
Description: 2 v. (192 leaves) ; 22 cm
Abstract: Holograph transcription of E. George Hall's Civil War diary transcribed by Hall in 1903 for his daughter Luretta M. Harkness. The first dated entry is for 16 Jan. 1862; the last is 13 April 1863. The first twelve and a half leaves of v. 1 are in the form of a letter addressed to Hall's daughter. They recount his days in training at Camp Campbell. The first 13 and last 75 leaves of v. 2 appear to be a recollection of Civil War events from Hall's perspective in 1903. A microfilm of the diary is available for researchers.
Note(s): Bio/History: Second lieutenant in the New York 76th Infantry Regiment, which trained at Camp Campbell, near Cortland, N.Y.
General Info: Researchers must use the microfilm version. Preferred citation:
Located at Mandeville Special Collections Library, UCSD.

Hofmann, John William, 1824-1902. Remarks on the battle of Gettysburg: Operations on the right of the First corps, Army of the Potomac. First day of the fight. Philadelphia: A.W. Auner, printer, 1880.

Montieth, Robert, “The Battle of the Wilderness and the Death of General Wadsworth.” War Papers. Read Before the Commandery of the State of Wisconsin, Military Order of the Loyal Legion of the United States. Published by the Commandery. Volume 1, Milwaukee: Burdick, Armitage & Allen 1891. p. 410-415.

Northrop, John Worrell. Chronicles from the diary of a war prisoner in Andersonville and other military prisons of the South in 1864 ... by John Worrell Northrop, formerly Seventy-sixth New York. Wichita, Kansas: [Wining printery], 1904.

Sager, Aaron, et al. Sager brothers Civil War letters, 1861-1863.
Description:    7 items.
Abstract:    The artistically talented Sager brothers, Aaron and George J. wrote to each other and family members concerning their service in the Federal army. All but one of the letters are illustrated with pen-and-ink sketches of scenes they describe. Topics include "free speeche choked down" by a mob in Syracuse and "Susan and May Quelon" hung in effigy, 1861 January 31; camp life and a contraband boy named "Bubby," 1862 February 22; southern sympathizing children and local African Americans with "souls and feelings," in Fredericksburg, 1862 June 10; contraband at Fort Slocum; civilians near Leesburg, Va., including women smoking pipes and chewing tobacco, and the execution of three deserters, 1863 June 22; bolting horse causing an accident, no date; and camp life at headquaters near Lookout Mountain including half rations, and lazy "sesesh," 1863 December 13.
Held by the University of Virginia

Smith, Abram P. History of the Seventy-sixth regiment, New York volunteers, what it endured and accomplished, containing descriptions of its twenty-five battles, its marches, its camp and bivouac scenes, with biographical sketches of fifty-three officers, and a complete record of the enlisted men, by A. P. Smith, late First Lieutenant and Q.M. Cortland. Syracuse: [Syracuse, Truair, Smith & Miles, printers], 1867.

Smith, Newton. Letters (1861-1864).
Description: 7 items.
Abstract: Letters sent to Smith's brother, Asa Smith, from various army camps in Virginia. He wrote about his experiences of life in camp, involvement in skirmishes with Confederate soldiers, and being paroled after his release from a Confederate prison.
Located at the New York State Library Manuscripts and Special Collections.

Squires, Dann C. and Franklin Squires. Diaries of Dann C. Squires and Franklin Squires, 1854-1886.
Description:    3 volumes ; 33 cm
Abstract:    Diaries of Dann C. Squires, 1854-1865, and Franklin Squires, 1883-1886, of Lapeer, N.Y. Dann Squires diaries contain brief daily notes concerning his activities as lawyer, farmer, supervisor of the county school system, justice of the peace, associate judge of the circuit court, and member of New York State Assembly. Most entries concern Squires' farm, but they also describe interviewing teachers for positions at schools, drawing up deeds and contracts for local people, enlisting volunteers for the 76th Regiment, performing marriage ceremonies, and sentencing people for their crimes. Franklin Squires diary contains daily notes about his farm as well as recording money received and spent. He is equally concerned with the health and well-being of his wife, Kittie, and his two sons Carl and Clifford. He mentions social gatherings and any other noteworthy incidents of his day. He often travels to Marathon, Cortland, and Syracuse. He also notes some financial dealings of his sister, Lovina.|
Held by the Fenimore Art Museum

Wales, Robert. Robert Wales Civil War scrapbook.
Description:    2 boxes; 31 x 38 x 8 cm. each.
Abstract:    Loose board pages from a scrapbook of miscellaneous items relating to the U.S. Civil War, compiled by Robert Wales. Contains a list of battles in which the 76th New York State Volunteer Regiment participated, an honor roll of the regiment, and brief biographies of some of its members. The rest of the collection is national in scope, containing two series of Gettysburg postcards, black and white sketches from Ulysses S. Grant's military career, a series of color pictures of Civil War scenes, sketches and photographs of generals from New York State, and newspaper clippings relating to the war.
Held by the Fenimore Art Museum

Wolcott, Walter, 1859. The military history of Yates County, N.Y.: comprising a record of the services rendered by citizens of this county in the army and navy, from the foundation of the government to the present time. Penn Yan, N.Y. Express Book and Job Print. House, 1895.