This regiment, Col. Richard C. Enright, was organized at New York City, for Meagher's, the Irish, Brigade, and received its State numerical designation November 2, 1861. It was mustered in the service of the United States for three years in September, October and November, 1861. June 12, 1863, the regiment was consolidated into a battalion of two companies, A and B. January 12, 1864, the men enlisted for the Kings County Volunteers, a regiment Col. Michael Murphy received authority to recruit, June 2, 1863, were assigned to the battalion as Company C; this company was mustered in September 21, 1863. In April, 1864, new Companies D and E, and in June, 1864, new Company F, joined the battalion. At the expiration of its term of service the men entitled thereto were discharged and the battalion retained in service.
The original companies of the regiment were recruited in New York City, portions of Companies A and E, however, came from Boston, Mass., and Company K — Faugh-o-Ballagh — from Albany; new Company C was recruited principally at Brooklyn, the other new companies mostly in New York City.
The regiment left the State November 28, 1861; served in the Irish, Meagher's, Brigade, Sumner's Division, Army of the Potomac, from November 30, 1861; in same, 2d, Brigade, Richardson's 1st Division, 2d Corps, Army of the Potomac, from March 13, 1862, and, commanded by Col. James D. Brady, it was honorably discharged and mustered out June 30, 1865, at Alexandria, Va.
During its service the regiment lost by death, killed in action, 8 officers, 70 enlisted men; of wounds received in action, 7 officers, 72 enlisted men; of disease and other causes, 1 officer, 94 enlisted men; total, 16 officers, 236 enlisted men; aggregate 252; of whom 31 enlisted men died in the hands of the enemy.

Sixty-third Infantry.—Cols., Richard C. Enright, John Burke, Henry Fowler, Richard C. Bentley, John H. Gleason, James D. Brady; Lieut.-Cols., Henry Fowler, Richard C. Bentley, John Stewart, John H. Gleason, James D. Brady, William H. Terwilliger; Majs., Thomas F. Lynch, Richard C. Bentley, Joseph O'Neil, Thomas Touhey, Miles McDonald, John H. Gleason, James D. Brady, William H. Terwilliger, James McQuade. The 63d, the 3d Irish regiment, composed mainly of recruits from New York city, but containing a number from Boston and some from Albany, was mustered into the service of the United States at New York city from Sept. to Dec., 1861, for three years. It left New York Nov. 28, 1861, for Washington and was assigned to the Irish brigade in Sumner's division, which became the 2nd brigade, 1st division, 2nd corps, Army of the Potomac. The regiment remained in the vicinity of Washington during the winter but was early in motion in the general advance to the Peninsula. Trench duty and picket duty occupied the troops during the siege of Yorktown but the regiment was in action at Williamsburg, Fair Oaks and during the Seven Days' battles. At Antietam the Irish brigade showed its mettle, the 63d losing 6 officers mortally wounded and 202 killed or wounded out of 341 engaged. The regiment then moved into Virginia and arrived at Falmouth in November. It went into the battle at Fredericksburg with 162 men, of whom 44 were reported killed, wounded or missing. After spending the winter in camp near Falmouth the 63d participated in the Chancellorsville campaign, and in June, 1863, was consolidated into two companies. This little force lost 23 at Gettysburg, fought at Auburn and Bristoe Station, shared in the Mine Run campaign, and established winter quarters near Brandy Station. In . Oct., 1863, a company of new recruits was added to the regiment, two more companies in April, 1864, and in June, 1864, one company, which with the reenlisted men continued it in service as a veteran organization. At the Wilderness 99 of the regiment fell, and 31 in the week following, among them Maj. Touhey. At Cold Harbor and in the first engagements before Petersburg the loss was severe. The regiment was active at Deep Bottom, Strawberry Plains, Reams' station, Hatcher's run, Fort Stedman, the final assault on April 2, 1865, and joined in the pursuit to Appomattox. It was mustered out at Alexandria on June 30, 1865, having lost 157 by death from wounds and 95 from other causes, out of a total enrollment of 1,411. The Irish brigade, as well as the individual regiments composing it, became noted for bravery on many a hard-fought field, and the 63d, which was one of the original regiments of the brigade, was one of New York's most gallant organizations. 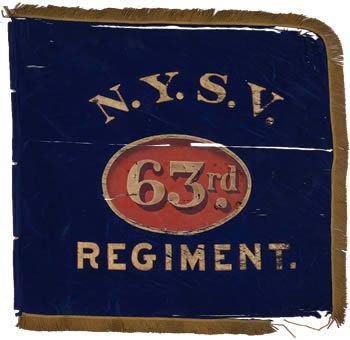 The 63rd Regiment, or the “Third Regiment Irish Brigade,” mustered into service in BG Thomas Meagher’s Irish Brigade for three years during the fall… 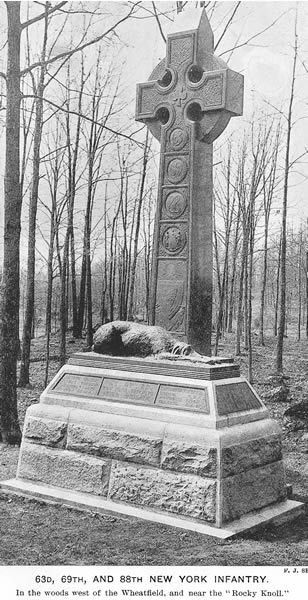 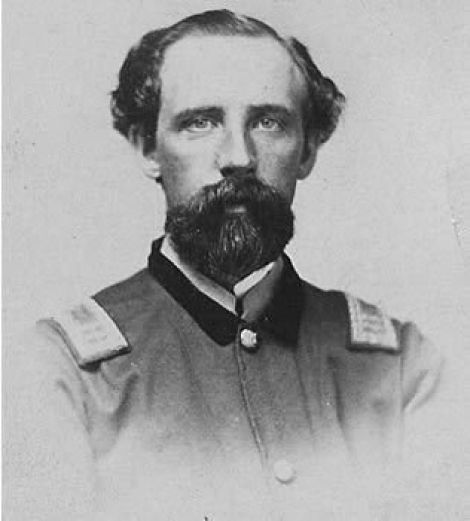 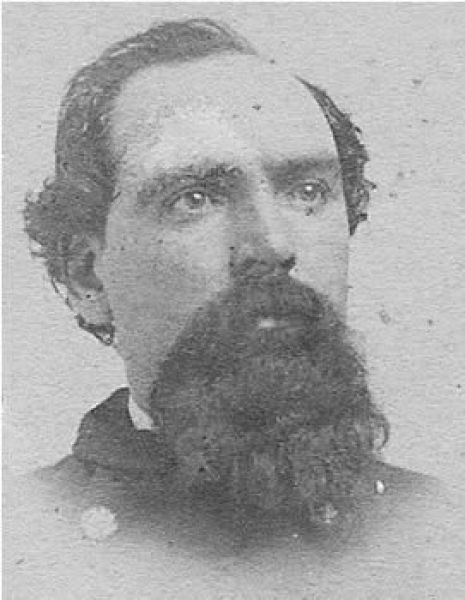 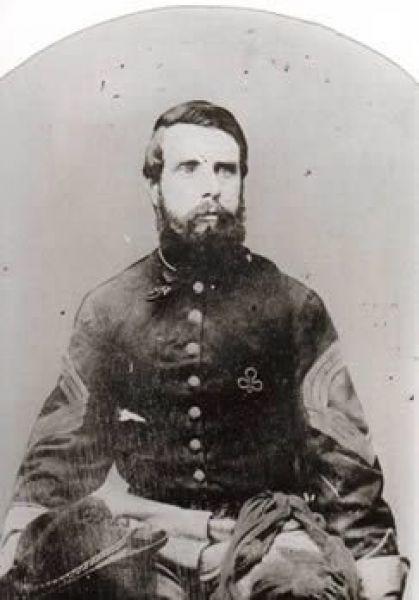 Conyngham, David Power. The Irish brigade and its campaigns, with some account of the Corcoran legion, and sketches of the principal officers. Washbourne: Cameron & Ferguson edition. Glasgow, R. & T, 1866.

Geoghegan, William. The Irish Brigade at Gettysburg : A poem read at Gettysburg, Pa., July 2, 1888 the 25th anniversary of that famous battle at the occasion of the dedication of a statue to the three New York regiments. 2014.

Kavanagh, John J. The John J. Kavanagh papers, 1848-1971.
Description: 1 box
Abstract: Contains: mimeograph copy of the typescript of Kavanagh's manuscript entitled A MEMOIR OF JOHN J. KAVANAGH (n.d.); photocopy of Edward Culleton's thesis entitled JOHN KAVANAGH-YOUNG IRELANDER, 1826-62 (1971)
Notes: Bio/History: Born in Ireland in 1826. Became a prominent member of the Young Ireland movement. Because of his participation in the Rising of 1848 he was charged with treason but was able to escape to France and shortly afterward to the United States where he took up residence first in Boston and later in New York and eventually became a U.S. citizen. Served in the Civil War as a Captain in the 63rd New York Infantry Regiment which was part of the Irish Brigade. Killed in the Battle of Antietam in 1862.
Located at the Military History Institute in Carlisle, PA.

Loback, Tom. Civil War flags of the Irish Brigade and others in the 69th Regiment's Armory collection . S.l. s.n, c1999.

O’Connell, Kim A. "'Faugh a Ballagh' for the Boys of the Irish Brigade." America's Civil War. March 2008

O'Flaherty, Patrick D.? Recruiting Irish Regiments in the Summer of 1862.

"Portrait of Captain William H. Terwilliger, officer of the Federal Army, and officers, Company A, 63d New York Infantry, vicinity of Washington, D.C."
Abstract:AmericanCivilWar.com presents information about the 63rd Regiment Infantry of the Union Army, which was also known as the Independent Irish Regiment and the Third Irish Brigade. The regiment was organized in New York City during November 1861. The information includes details about the regiment's service during the war
Available at http://www.americancivilwar.com/ny63rd.html

Powers, Kenneth H.; Bilby, Joseph G. "The Mystery of the Meagher Sword." My Sons Were Faithful and They Fought : The Irish Brigade at Antietam: An Anthology. Longstreet House, 1997. 87 -91.

Vaticano, Patricia. "A Defense of the 63rd New York State Volunteer Regiment of the Irish Brigade."
Available online at: dspace.lasrworks.org/bitstream/10349/704/1/07HIST-VaticanoPatricia.pdf