Colonel Wladimir Krzyzanowski received authority from the War Department August 20, 1861, to recruit a regiment of infantry, which he named the United States Rifles. Colonel Julian Allen had received authority, July 22, 1861, also from the War Department to recruit a regiment, which was known as the Polish Legion; under War Department authority of July 25, 1861, Col. Theodore Lichtenhein recruited the Gallatin Rifles; Col. Frederick Gellman the Morgan Rifles, and Col. Andrew Lutz, under authority from the same source, dated July 31, 1861, the Humboldt Yaegers. The latter, the Polish Legion and the Gallatin Rifles, were merged into the Morgan Rifles under Colonel Lutz. October 19, 1861, the 58th Regiment was organized in New York City by the State authorities by the consolidation of the incomplete Morgan and the United States Rifles. Companies A, B, C and D were formed of the corresponding companies, E of Companies E and G, and F of Companies F and H of the Morgan Rifles, and G, H, I and K of Companies A, B, C and D of the United States Rifles, and Wladimir Krzyzanowski was appointed Colonel of the regiment. The companies were mustered in the service of the United States for three years from August 27 to November 5, 1861, and, composed of Danes, Frenchmen, Germans, Italians, Poles and Russians, were recruited principally in New York city. At the expiration of its term, the men entitled thereto were discharged and the regiment retained in the service. June 30, 1865, the 45th Infantry were transferred to it, company to corresponding company.
The regiment left the State November 7, 1861; served in the 3d Brigade, Blenker's Division, Army of the Potomac, from November, 1861; in same brigade and division, Mountain Department, from April, 1862; in 2d Brigade, 3d Division, 1st Corps, Army of Virginia, from June 26, 1862; in same brigade and division, nth Corps, Army of the Potomac, from September 12, 1862; on veteran furlough from January, 1864; at Bridgeport, Ala., in 4th Division, 20th Corps, from March, 1864; in 3d Brigade, defenses of N. & C. R. R., Department of Cumberland, from June, 1864; at Nashville, Tenn., Department of Cumberland, from September, 1865; where it was honorably discharged and mustered out, under Colonel Krzyzanowski, October 1, 1865.
During its service the regiment lost by death, killed in action, 2 officers, 22 enlisted men; of wounds received in action, 2 officers, 6 enlisted men; of disease and other causes, 3 officers, 60 enlisted men; total, 7 officers, 88 enlisted men; aggregate, 95; of whom 10 enlisted men died in the hands of the enemy.

Fifty-Eighth Infantry.—Col., Wladimir Kryzanowski; Lieut.-Cols., Frederick Gellman, August Otto, Adolphus Dobke; Majs., Theodore Lichtenstein, William Henkel, George N. Harvey, Adolph C. Warberg, Michael Esenbean. This regiment, known as the Morgan Rifles, was composed of the United States Rifles, Polish Legion, Gallatin Rifles, Morgan Rifles and Humboldt Yeagers, and was mustered into the U. S. service at New York city in Nov., 1861, for three years. It left the state for Washington, Nov. 7, 1861; was assigned to the 3d brigade, Blenker's division, Army of the Potomac, stationed near Washington until April, 1862, when it was ordered to join the Mountain Department and reached Gen. Fremont in time to participate in the battle of Cross Keys. On June 26, 1862, the regiment was assigned to the 2nd brigade, 3d division, 1st corps, Army of Virginia, which subsequently became the nth corps, and with it served through Gen. Pope's campaign, being present at Fox's ford, Sulphur springs, Waterloo bridge, Groveton and the second Bull Run, losing in the campaign 57 in killed, wounded and missing. The regiment was not engaged at Fredericksburg, although stationed in the vicinity. Winter quarters were established at Stafford and the regiment was active in the Chancellorsville movement in May, 1863. From there it moved to Gettysburg, was active in the battle, then southward through Boonsboro and Funks-town, and was ordered west on Sept. 24. It arrived at Bridgeport, Ala., early in October, was present at Wauhatchie and in the Chattanooga and Rossville campaigns and in March, 1864, was attached to the 4th division, 20th corps. A large number of the regiment reenlisted in Dec., 1863, received veteran furlough and rejoined the regiment in Tennessee. The veteran regiment completed its service in the Department of the Cumberland, being stationed from June, 1864, to September, 1865, at Nashville, where it was mustered out on Oct. 1, 1865. During its term of service it lost 32 by death from wounds and 95 from other causes. 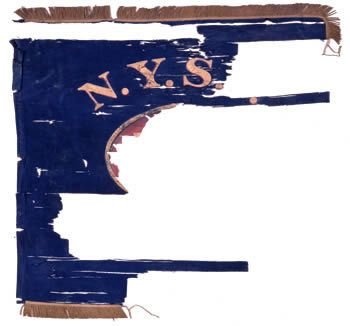 The NYS Battle Flag Collection includes two flank markers carried by the 58th Regiment NY Volunteer Infantry. Both flags have losses, one more so than… 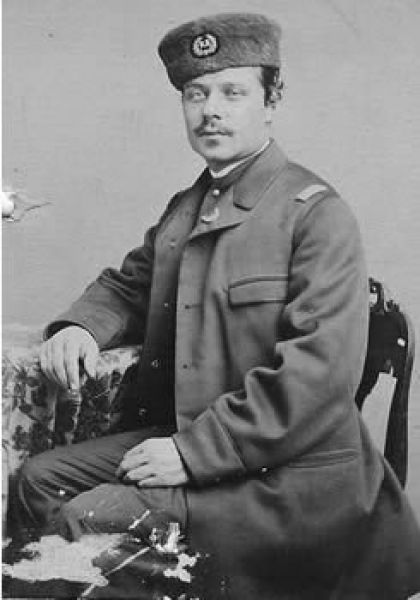 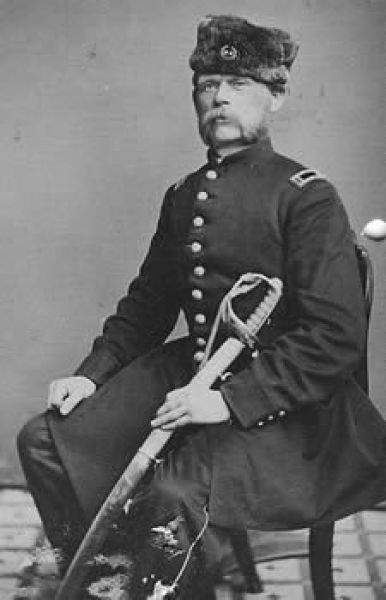 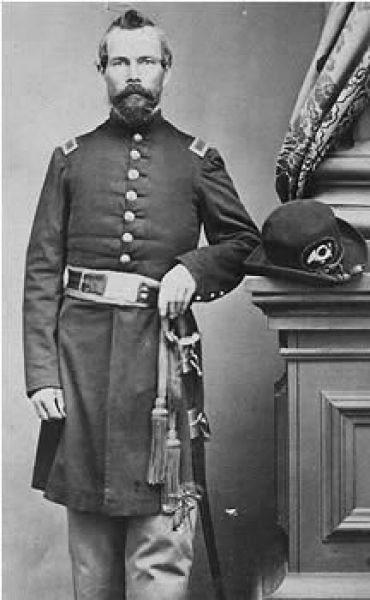 Gallatin Rifles Col. Theo. Lichtenhein.: Raised by order of the Secretary of War Volunteers wanted for this first class regiment, which will leave for the seat of war in a very short time. Pay and rations for the time of enlistment. Headquarters, 24 North William St.
Description: 1 sheet
Notes: The Gallatin Rifles, recruited by Theodore Lichtenhein, were mustered in Nov. 5, 1861 as part of the 58th New York Infantry Regiment; the regiment was mustered out Oct. 1, 1865./ Printed in red and blue./ The illustration shows an eagle on an upright shield, with the banner: E pluribus unum; an American flag waves behind the shield.
AT: Library Co of Philadelphia.

Haas, James E. This gunner at his piece : College Point, New York & the Civil War, with biographies of the men who served. Baltimore, MD: Gateway Press, 2002.