Colonel D. D. Bidwell received authority from the War Department, August 1, 1861, to recruit a regiment of infantry. September 18, 1861, the State authorities gave this regiment, organized at Buffalo, its numerical designation, and completed its organization by attaching to it the Fremont Rifles, and merging into it another incomplete company, Many members of the 6sth State Militia joined this regiment, which was mustered in the service of the United States for three years, September 18, 1861. A detachment of three years' men of the 33d Infantry was attached to the regiment May 14, 1863, and transferred to the companies of the regiment October 1, 1863. September 17, 1864, the men not entitled to be discharged were formed into a battalion of five companies, A, B, C, D and E, and retained in the service; those of Companies A and G forming Company A; of B and D Company B; of E, F and some of I Company C; of K and some of I Company D; and those of C and H Company E; the men entitled to be discharged by reason of expiration of their term of service were sent to Buffalo and there, under command of Maj. A. W. Brazee, honorably discharged October 18, 1864.
The companies were recruited principally: A, G, I and K in Chautauqua county; B. D, E and F in Erie county; C — Fremont Rifles — in Westchester county; and H in the county of Niagara.
The regiment left the State September 20, 1861; served at and near Washington, D. C., from September, 1861; in 3d, Stevens', Brigade, Smith's Division, Army of the Potomac, from October 15, 1861; in 3d Davidson's, Brigade, same division, 4th Corps, Army of the Potomac, from March 13, 1862; in 3d Brigade, 2d Division, 6th Corps, Army of the Potomac, from May, 1862; and it was honorably discharged and mustered out, under Col. George H. Selkirk, June 27, 1865, at Washington, D. C.
During its service, the regiment lost by death, killed in action, 12 officers, 84 enlisted men; of wounds received in action, 4 officers, 42 enlisted men; of disease and other causes, 5 officers, 175 enlisted men; total, 21 officers, 301 enlisted men; aggregate, 322; of whom 23 enlisted men died in the hands of the enemy.

Forty-ninth Infantry.—Cols., Daniel D. Bidwell, Erastus D. Holt, George H. Selkirk; Lieut-Cols., William C. Alberger, George W. Johnson, Erastus D. Holt, George H. Selkirk, Thomas Cluney; Majs., George W. Johnson, William Ellis, Andrew W. Brazee, George H. Selkirk, Solomon W. Russell, Jr. The 49th, the and Buffalo regiment, contained four companies from Chautauqua county, four from Erie, one from Westchester and one from Niagara county and was mustered into the U. S. service at Buffalo, Sept. 18, 1861, for a three years' term. It left Buffalo Sept. 20 for Washington, was there assigned to the 3d brigade, Smith's division, with which it remained throughout its term of service. In March, 1862, the brigade and division were attached to the 4th corps and in May to the 6th corps. The regiment was first engaged at Lewinsville, Va., in Oct., 1861, after which it encamped near Lewinsville until March, 1862, when it was ordered to Alexandria and from there to the Peninsula. It performed trench duty at Yorktown; was in support during the battles of Lee's mill and Williamsburg; participated in the Seven Days' battles, and went into camp at Harrison's landing until the middle of August, when it was withdrawn to Alexandria. In September the regiment joined the Army of the Potomac in Maryland; fought at Crampton's gap, Antietam, and Fredericks-burg; spent the winter near White Oak Church; took part in the Chancellorsville campaign in May, 1863, losing 35 members killed, wounded or missing, and left Virginia on June 13 for Gettysburg. The regiment was there in support of the artillery, and after the battle joined in the pursuit, reaching Warrenton, Va., late in the month of July. After a fortnight in camp there it proceeded to Culpeper, engaging the enemy at Rappahannock Station on the march. Winter quarters were established at Brandy Station in Dec., 1863, and during that month 175 members reenlisted, securing the continuance of the regiment in the field as a veteran organization. On May 4, 1864, it broke camp for the Wilderness campaign and during the next two days lost 89 in killed, wounded and missing. At Spottsylvania the total loss was 121 members, and in these two battles 10 officers were killed, including Maj. Ellis, who fell at Spottsylvania. After the battle of Cold Harbor the regiment reported a loss of 61 killed, 155 wounded and 30 missing, out of 384 who had left Brandy Station. It proceeded to Petersburg and participated in the first assault. In July, with the 6th corps, it was ordered to Washington and arrived in time to assist in the defense of Fort Stevens, where Lieut.-Col Johnson, the commander, was killed. Continuing its service in the Shenandoah valley the regiment was active at Charlestown, the Opequan, Fisher's hill, and Cedar creek, where Col. Bidwell was killed. The original members not reenlisted returned to New York in October and were there mustered out on the 18th. The veterans were consolidated into a battalion of five companies, which was ordered to Petersburg, where it participated in the siege operations until the fall of the city. In the final assault on April 2, 1865, Col. Holt was killed. The 3d brigade, to which the 49th belonged, was remarkably unfortunate in the loss of 72 officers in the five regiments of which it was composed. The 49th was mustered out at Washington on June 27, 1865, having lost 141 by death from wounds, and 180 by death from other causes, out of a total enrollment of 1,312. Col. Fox numbers it among the "three hundred fighting regiments." 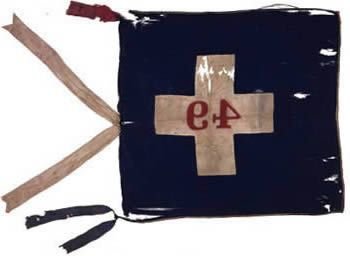 This pair of blue silk flank markers feature the 2nd Division, VI Corps badge in silk sewn to the center within a cut out section. The regiment’s… 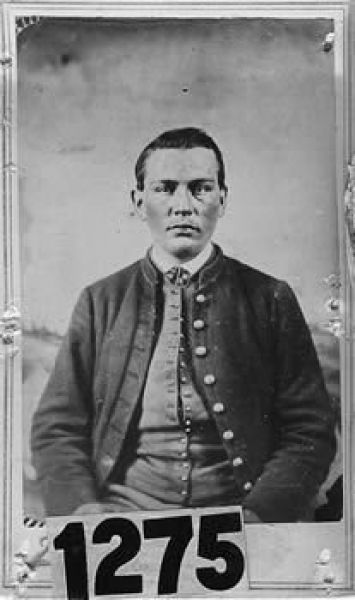 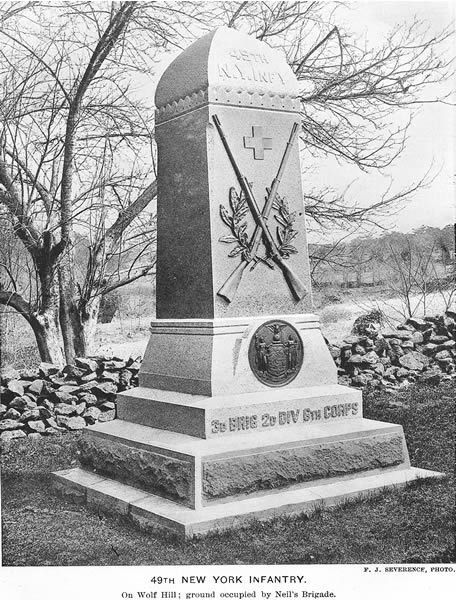 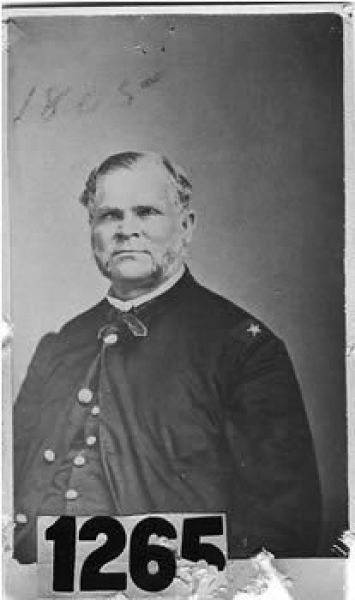 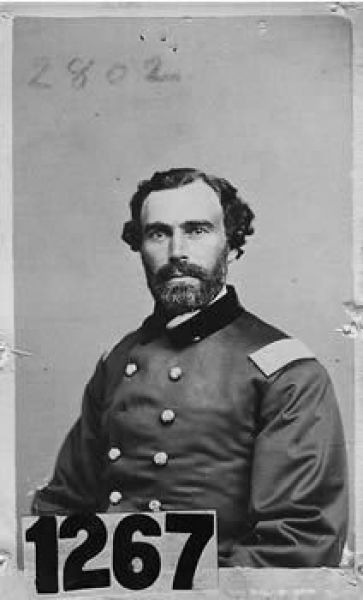 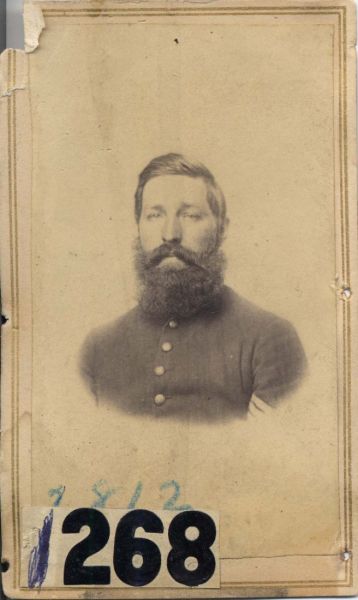 Alexander, Thomas R. Account book, 1848-1887.
Description: 1 v.
Abstract: This account book, 1848-1887, kept by Thomas R. Alexander, contains records of goods purchased and sold by this Prince William County, Va., merchant. Included in the book is a list, 1862, of merchandise confiscated by soldiers from the 49th New York Infantry Regiment of the U.S. Army of the Potomac.
Notes: In the collections of the Virginia Historical Society, Richmond (Mss5:3/Al276:1).
General Info: Unpublished description available./ Gift of William S. Simpson, Jr., of Richmond, Va., in 1993.

Boughton, William DeLancey. Diary, 1861-1864.
Description: 1 v.
Abstract: Manuscript copy of a diary kept by William D. Boughton while serving in the military during the Civil War. It contains descriptions of battlefield engagements at Williamsburg, 1862, Antietam, 1862, and Petersburg, 1864. In addition, it contains comments on military life, camp conditions, drill exercises, picket duty, and troop morale. There is a considerable gap in the record from ca. October 1862 to May 1864. A note by the compiler, Boughton's niece, L.H.T. Dow, discusses a letter of 5 July 1864 written by Boughton in which he mentioned losing his diary during the Battle of Cold Harbor.
Notes: Civil War soldier; enrolled 10 September 1861 at Lockport, NY to serve three years; mustered in 10 September 1861 as first sergeant, Company H, 49th New York Regiment of Infantry; promoted to second lieutenant, 3 August 1862; wounded in action, 4 May 1863 at Mary's Heights, VA; mustered out 18 October 1864 at Buffalo, NY; commissioned.
Located at the New York State Library Manuscripts and Special Collections.

Cox, William Van Zandt"The defenses of Washington: General Early's advance on the capital and the battle of Fort Stevens, July 11 and 12, 1864." Records of the Columbia Historical Society, Washington, D.C. 1901.

Pastwik, Jacob L. Posthumous Reunion of the 49th New York Infantry Volunteers on the 150th Anniversary of the Battles of the Wilderness and Spotsylvania Courthouse, Spotsylvania, Virginia. 2014.
20 pages. Color illustrations.

Peririe, Theodore. Letter, 21 April 1862.
4 pages.
Letter, 21 April 1862, from Theodore Peririe, 49th New York Infantry, near Yorktown, Virginia, to Thomas Scovell. He writes about Scovell being appointed his guardian since Captain Charles H. Moss (ca. 1835-1862) has died. He also mentions the numerous skirmishes in which his unit has been involved, picket duy, and building breastworks in preparation for the siege of Yorktown, as well as the order given by General McClellan that no more sutlers be allowed in camp. A transcription of the letter is included.
Accession 40758. Located at the Library of Virginia in Richmond, Virginia.
Thank you to Ed Worman for pointing out this resource.

Potter, William W. Reminiscences of Field Hospital Service with the Army of the Potomac. Buffalo, N.Y.:1889.

Simmons, John. Through many dangers and hardships. A thrilling story of a successful escape from prison. National Tribune, September 15, 1904.

Stilson, Lyman D. Letter, 25 July 1862.
4 pages.
Letter, 25 July 1862, from Lyman D. Stilson (1839-1914), 49th New York Infantry near Harrison’s Landing, Virginia, to his cousin. He writes about picket duty and scouting, pillaging Confederate property, fighting during the week which became known as the Seven Days’ Battles, including his unit’s subsequent retreat, and the large number of casualties on both sides.
Accession 43068. Located at the Library of Virginia in Richmond, Virginia.
Thank you to Ed Worman for pointing out this resource.

Wunderlun, Frank. Civil War memoir, [undated].
Description: 1 Item (24 p.)
Abstract: Recounts Wunderlun's enlistment and service in Company C, 33rd New York Infantry Regiment, USA, and Company G, 49th New York Infantry Regiment, USA, along with his friend Joseph I. Wieder. The memoir is written to Wieder's son (Wunderlun's nephew) and is in the style of a diary. It covers the period from August 27, 1862 to April 25, 1864. Subjects of interest include the Fredericksburg campaign and the death of Joseph I. Wieder.
Notes: Photocopy
At: Tennessee State Library and Archives