The following is taken from New York in the War of the Rebellion, 3rd ed. Frederick Phisterer. Albany: J. B. Lyon Company, 1912.
This regiment, Col. Baron Fred. W. Von Egloffstein, was organized in New York city March I, 1862, by the consolidation of the 3d Regiment German Rifles, Col. Casper Schneider, with the Seward Infantry, Colonel von Egloffstein. It was mustered in the service of the United States between November, 1861, and March, 1862, for three years.
Company C was mustered out May 8, 1862. At the expiration of its term of enlistment the men entitled thereto were, under Col. William Heine, honorably discharged at New York city, and the regiment retained in service, but March 4, 1865, consolidated into three companies, A, B and C.
The companies were recruited principally: A, Grenadiers, in New York city; B, C— Corps d'Elite—D, E, F — 3d German Rifles, G, H, I and K — Baker's Rifles and New York Battery, at Elmira.
The regiment left the State March 5, 1862; served at Washington, D. C, from March 6, 1862; at Norfolk, Va., from March 21, 1862; in the 1st Brigade, 2d Division, Department North Carolina, from April, 1862; in 1st Brigade, 3d Division, 9th Corps, from July, 1862; at Suffolk, 7th Corps, Department of Virginia, from April, 1863; on the Peninsula, Va., in 1st Brigade, 2d Division, 7th Corps, in June and July, 1863; in the Department of the South, in Alford's Brigade, ad Division, 18th Corps, from August, 1863; same brigade, Vogdes' Division, 10th Corps, from October, 1863, on Folly and Little Folly Island, S. C.; in 2d Brigade, De Russey's Division, 22d Corps, from August, 1864; in 1st Brigade, Provisional Division, with the Army of the Shenandoah from September 22, 1864; in the 1st Brigade, Ferrero's Division, Army of the James, at Bermuda Hundred, Va., from December, 1864; in the Department of Virginia from April, 1865; and it was honorably discharged and mustered out, under Capt. Wm. Redlich, December 7, 1865, at City Point, Va.
During its service the regiment lost by death, killed in action, 1 officer, 48 enlisted men; of wounds received in action, 3 officers, 13 enlisted men; of disease and other causes, 3 officers, 100 enlisted men; total, 7 officers, 161 enlisted men; aggregate, 168; of whom 5 enlisted men died in the hands of the enemy.

The following is taken from The Union army: a history of military affairs in the loyal states, 1861-65 -- records of the regiments in the Union army -- cyclopedia of battles -- memoirs of commanders and soldiers. Madison, WI: Federal Pub. Co., 1908. volume II.
One Hundred and Third Infantry.—Cols., Baron Fred W. Von Egloffstein, Benjamin Ringold, Wilhelm Heine; Lieut.-Cols., Kas-per Schneider, Julius C. Kretschmar, Julius E. Quentin, Andreas Wettstien; Majs., Julius C. Kretschmar, Julius E. Quentin, Benja~ min Ringold, Joseph Morrison. This regiment, known as the Sew-ard infantry, recruited in the counties of New York and Chemung and organized at New York city, March I, 1862, was mustered into the U. S. service from Nov. 1861, to March, 1862, for three years. Co. C was mustered out May 8, 1862. On the expiration of its term of service the original members (except veterans) were mustered out at New York city, under Col. Heine, and the veterans and recruits were consolidated on March 4, 1865, into a battalion of three companies. This battalion was retained in service until Dec. 7, 1865, when it was mustered out, under Capt. William Red-lichj at City Point, Va. The regiment left the state on March 5, 1862, and was stationed for a month at Washington and Norfolk, when it was assigned to the 1st brigade, 2nd division, Department of North Carolina, and took part in the actions at Foy's plantation, Fort Macon, Gillett's farm, Haughton's mill and Dismal swamp, N. C. When the 9th corps was formed in July, 1862, the 103d was assigned to the 1st brigade, 3d division, and moved with the corps, under Maj.-Gen. Reno, on McClellan's Maryland campaign in September. It was heavily engaged at Antietam, losing 117 officers and men in killed, wounded and missing, its severest loss being incurred in the gallant charge at the stone bridge. Among the mortally wounded were Capts. Henry A. Sand and William Brandt. On Nov. 15 it was engaged at Fayetteville, and lost 25 in killed, wounded and missing at the battle of Fredericksburg in December. With the 7th corps it took part in the siege of Suffolk in the spring of 1863, and lost 20 in killed, wounded and missing at Providence Church road, Col. Ringold being among the killed. In August it was ordered to South Carolina, where it took part in the siege of Fort Wagner and the subsequent operations about Charleston harbor. During the actions on James island, in May, June and July, 1864, it lost 45 men in killed, wounded and missing. In Dec., 1864, it was assigned to the 1st brigade, Ferrero's division, Army of the James, at Bermuda Hundred, Va., and took part in the siege of Petersburg until its fall on April 2, 1865, but sustained no further losses in battle. During its term of service it lost 4 officers and 61 men killed and mortally wounded; 3 officers and 100 men died of disease and other causes, a total of 7 officers and 161 men.

The 103rd Regiment NY Volunteer Infantry mustered into service for three years between November 1861 and March 1862. When their three year term… 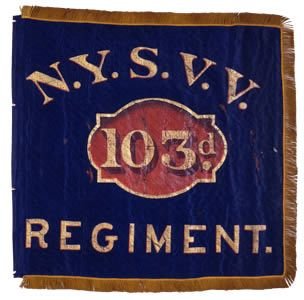 The 103rd Regiment NY Volunteer Infantry mustered into service for three years between November 1861 and March 1862. When their three year term…

Van Eglofstein, Frederick W. Letter (July 18, 1865).
Letter of testimony written on behalf of Andress Fischer, formerly a private of Company A of the 103rd regiment.
Located at the New York State Library Manuscripts and Special Collections.

The veteran association of Company I, 103rd regiment New York volunteers. [1912] [4] p.
Listed in Dornbusch; however, it is not know if this resource exists.