The 9th Infantry Regiment was one of twelve New York State National Guard infantry regiments that were federalized for service in the Spanish-American War. The 9th Regiment was officially organized in June of 1859 but some of its parent companies date back to the War of 1812. The regiment was entirely staffed by men from New York City and was actively called upon by the State of New York to deal with instances of unrest. Elements of the 9th Regiment was called to service during the abolition riots of 1835, the great fire in New York City of 1845, the Orange riot of 1871 and the three railroad riots of 1877, 1892, and 1895 at Albany, Buffalo, and Brooklyn respectively. During the Civil War the 9th Regiment fought as both the 9th New York Militia and the 83rd New York Volunteers. It was attached to the Army of the Potomac and participated in dozens of actions from 1861 to 1864 including the battles of Antietam, Fredericksburg, Chancellorsville, Gettysburg, the Wilderness, Spotsylvania Court House, and Cold Harbor to name some of the more famous engagements. On May 3rd, 1898 the regiment was reorganized as a twelve-company unit and officially mustered into federal service as the “9th Regiment Infantry, New York Vols.”

The 9th Regiment was mustered in at Camp Townsend, NY and departed on the 24th of May after several weeks of drill, bound for Camp George H. Thomas at Chickamauga Park in Georgia. The regiment arrived on the 26th of May and by the 29th was officially attached to the First Brigade, of the Second Division, of the Third Army Corp., where it was brigaded with the 1st Arkansas and the 2nd Kentucky. The Regiment remained at Camp Thomas until September 13th when it was returned to New York and mustered out on November 15th, 1898 having never fired a shot. 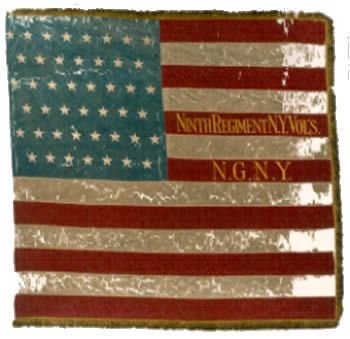 On April 27, 1898, state officials selected the 9th Regiment NYNG to enter federal service as a volunteer regiment in the war against Spain. Mustered…

Annual Report of the Adjutant General of the State of New York for the Year of 1899. Albany: James B. Lyon, State Printer, 1900.