Col. Samuel Graham, being so authorized, proceeded to recruit a regiment of heavy artillery — the 2d Regiment Jackson Artillery; Col. Edward Murray received authority from the State in November, 1861, to recruit the Jackson Heavy Artillery. These two organizations were consolidated March 6, 1862, Colonel Graham's men forming Companies A, B, C and D, and Colonel Murray's E, F, G and H of the new regiment, the two colonels being appointed Colonel and Lieutenant-Colonel, respectively. The 70th Militia furnished a number of men to the regiment. The companies were mustered in the service of the United States for three years, in New York harbor, in April, 1862. December 31, 1862, the 6th Battalion of Artillery—3d Battalion of Black River Artillery — was transferred to the regiment, forming its Companies I, K, L and M, and thereby completing the regimental organization. These companies had been mustered in the United States service for three years; I and K September 11; and L and M September 12, 1862, at Sackett's Harbor. At the expiration of the term of service of the original eight companies, the men entitled thereto were discharged, and the companies retained in service.

The eight companies, then organized, served in New York harbor at Forts Hamilton, Lafayette, Wood, Gibson, Richmond and Schuyler, from March 11, 1862; at Baltimore, Md., and other points of the Middle Department, from May 28, 1862. Companies A and F served at Harper's Ferry, W. Va., from June 19, 1862, where they were surrendered in September, 1862; they rejoined the regiment after being paroled, at Baltimore, Md. The 3d Battalion served in the defenses of Washington north, and later south, of the Potomac, 22d Corps, from December, 1862, and at Harper's Ferry, W. Va., from November 24, 1863; the 1st and 2d Battalions were also ordered to Harper's Ferry, 8th Corps, April 19, 1864. The 1st Battalion, Companies A, B, C and D, served with the 1st Brigade, 1st Division, Army of West Virginia, 8th Corps, in the field from May, 1864; it was relieved by the 2d Battalion, July 29, 1864, and returned to Harper's Ferry. The 2d Battalion, Companies E, F, G and H, served in the field in the 1st Brigade, 1st Division, Army of West Virginia, until October 28, 1864, when it returned to Harper's Ferry. The regiment served as infantry and heavy artillery.

Fifth Artillery (Heavy).—Cols., Samuel Graham, Edward Murray; Lieut.-Cols., Edward Murray, Henry B. Mcllvaine; Majs., Henry B. Mcllvaine, Eugene McGrath, Frederick C. Wilkie, Casper Urban, Henry B. Wilder, Gustavus F. Merriam, John H. Graham, William H. Boyle. This regiment, known as the 2nd regiment, Jackson heavy artillery, was organized in New York City, the first two battalions being recruited principally in the counties of New York and Kings by Cols. Graham and Murray, and the 70th militia contributing a number of men to the regiment. These battalions were mustered into the U. S. service in April, 1862, for three years. The regimental organization was completed on Dec. 31, 1862, by the transfer of the 3d battalion of Black River artillery, forming Cos. K, L and M. These companies had been recruited in the counties of Jefferson and Lewis, and mustered into the U. S. service at Sacket's Harbor, Sept. 11-12, for three years. The members of the original eight companies, except veterans, were mustered out on the expiration of their term of service, the veterans and recruits being continued in service. The first eight companies organized were employed for the first two months in garrisoning the different fortifications in New York harbor. In the latter part of May, 1862, they went to Baltimore, Md. On June 19, Cos. A and F were detached and under the command of Maj. Mcllvaine were sent to Harper's Ferry, where they were surrendered in Sept., 1862, at the time of Stonewall Jackson's capture of that place. They subsequently rejoined the regiment at Baltimore, after being paroled. The 3d battalion was stationed in the defenses of Washington for nearly a year, but was ordered to Harper's Ferry, in Nov., 1863, where it was joined the following April by the other two battalions, the regiment being employed in guarding Maryland heights and in fatigue duties. The 1st battalion— Cos. A, B, C and D—was detached in May, 1864, for service in the field with the 1st brigade, 1st division. Army of West Virginia (8th corps), and fought at Piedmont, Lexington, Buchanan, Lynchburg, Liberty and Salem. On the occasion of Early's attack on Harper's Ferry in July, the regiment performed excellent service and sustained a considerable loss. On July 29, 1864, the ist battalion was relieved in the field by the 2nd—Cos. E, F, G and H —under command of Maj. Urban, and the latter took part in all the great battles of the valley under Gen. Sheridan, being active at Snicker's ferry, where it lost 69 killed, wounded and missing, at Winchester, Martinsburg, Cedar creek, Charlestown, Halltown, Berryville, the Opequan, where it lost 43, Fisher's hill, two actions at Cedar creek in October, loss 53, and 309 respectively, 301 being captured in the second engagement. On Oct. 28, the battalion returned to Harper's Ferry. The regiment served both as infantry and heavy artillery and was mustered out at Harper's Ferry, July 19, 1865, under command of Col. Graham. It lost during service 98 men killed and died of wounds; i officer and 293 enlisted men died of disease, accidents, and other causes; total deaths, 392, of whom 76 died as prisoners.

Inquiries Relating to the Formation and Movements 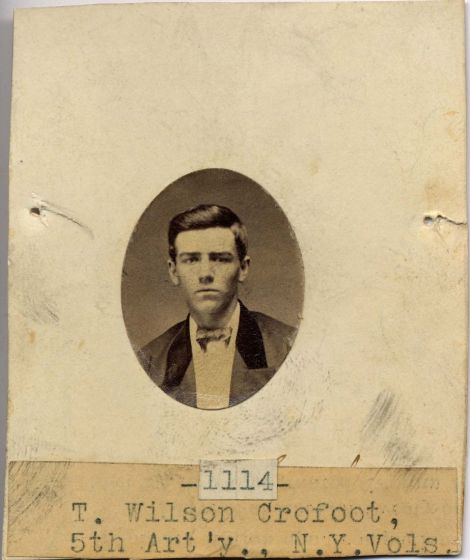 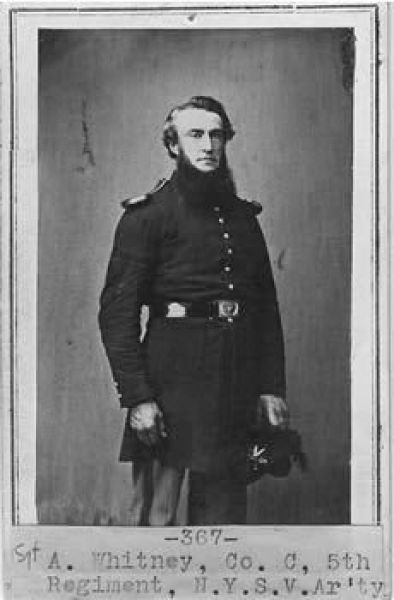 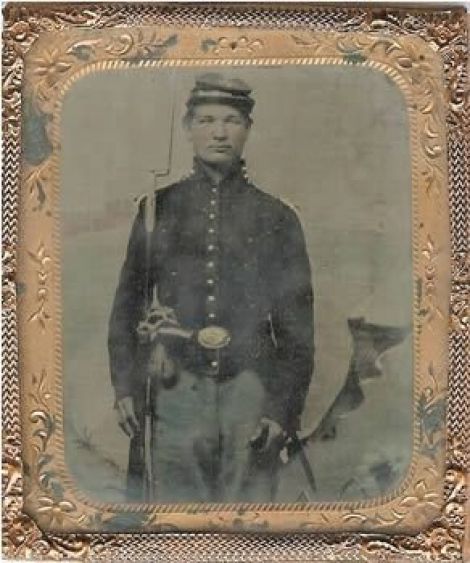 Cooper, Robert.  The Prison Pens of the South: Personal History of a Prisoner in the Hands of the Confederacy. Brooklyn, NY: Press of I W Chalmers, 270 Court Street, 1896.
This account was transcribed and donated by Jed Roman, great-great nephew of Cooper.

Hewitt Family. Frederick and Frank Hewitt letters (1863-1865).
This collection contains 15 letters that Fred Hewitt wrote to his family and friends while serving in the 5th New York Heavy Artillery Regiment during the Civil War, as well as 1 letter written by his brother Frank, who was in the same regiment. Fred Hewitt discussed several aspects of his service in army camps in Maryland and Virginia.
Held at the William L. Clements Library, University of Michigan
Thank you to Ed Worman for this reference.

United Staes. Army. New York Artillery Regiment 5th (1861-1865). Company F. Records, 1862-1865.
Abstract: A collection of orders, muster rolls and other materials including several discharge certificates and regimental circulars retained by the company. A particularly interesting item is an invoice sent to the commanding officer of Company F for clothing supplied to a member of his command while held prisoner.