The following is taken from New York in the War of the Rebellion, 30th ed. Frederick Phisterer. Albany: J. B. Lyon Company, 1912.

Battery B, 1st Battalion, was converted into the 3Oth Battery March 16, 1863. It was recruited and organized in New York city, and there mustered in. the service of the United States for three years August 12, 1861. Commanded by Capt. Adolph Voegelee it left the State October 20, 1861, and served at and near Washington, D. C., from October, 1861; in the Artillery Reserve, Army of the Potomac, from March, 1862; in the 3d Brigade, Artillery Reserve, 5th Corps, Army of the Potomac, from May, 1862; in the Artillery Reserve, 5th Corps, from September, 1862; in the Artillery Reserve, Army of the Potomac, from December 2, 1862; in 2d Volunteer Brigade, Reserve Artillery, Army of the Potomac, from May, 1863; in 22d Corps from June, 1863; at and near Harper's Ferry, W. Va., and in the Army of West Virginia, 8th Corps, from July, 1863; in 22d Corps from January, 1865. At the expiration of its term of service the men entitled thereto were discharged and the battery continued in service. October 25, 1864, the veterans and recruits of the 31st Battery were transferred to it, and June 23, 1865,.the battery, commanded by Lieut. Charles A. Hausmann, was mustered out and honorably discharged at New York city, having during its service lost by death, killed in action, 4 enlisted men; of wounds received in action, 4 enlisted men; of disease and other causes, 12 enlisted men; total, 20; of whom 2 died in the hands of the enemy.

The 30th independent battery took part in the siege of Yorktown and the succeeding Peninsular campaign, attached to the artillery reserve of the 5th corps. It fought at Mechanicsville, Garnett's farm. Glendale and Malvern hill with a loss of 9 killed and wounded. Still in the reserve it was present at Antietam, Fredericksburg, Marye's heights and Salem Church. Attached to the 8th corps, Army of West Virginia after July, 1863, it fought at New Market, Piedmont, Lynchburg, Buford's gap, Salem, Harper's Ferry, Maryland heights, Charlestown, Bunker Hill and Martinsburg. In Oct., 1864, the veterans and recruits of the 31st battery were transferred to it, thus filling its ranks depleted by the muster-out of the original members (except veterans). Capt. Adolph Voegele was dismissed on Aug. 3, 1863, and was succeeded by Capt. Alfred Von Kleiser, who was discharged on May 15, 1865. The battery was mustered out at New York city, June 23, 1865, commanded by Lieut. Conrad Carrolin, having lost in service 8 men killed and mortally wounded, and 12 men who died of disease and other causes. 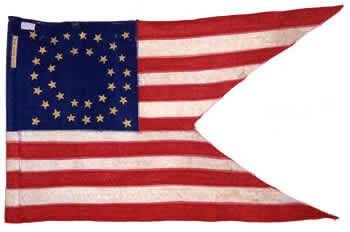 The NYS Battle Flag Collection includes one flag carried by the 30th Independent Battery, a silk, swallowtail guidon in the “stars and stripes”…