The following is taken from New York in the War of the Rebellion, 25th ed. Frederick Phisterer. Albany: J. B. Lyon Company, 1912.

This battery was organized at Lockport, and there mustered in the service of the United States for three years December 12, 1862. It was recruited principally at Lockport, Alabama, Byron, Elba, Hartland, Lewiston, Medina, Pembroke, Ridgeway, Shelby and Stafford, and, commanded by Capt. John A. Grow, left the State December 18, 1862. It was wrecked on the transport Sparkling Sea January 9, 1863, en route from New York city to the Department of the Gulf, and arrived finally at New Orleans, La., February 4, 1863. January 20, 1864, 117 enlisted men of the 18th Battery joined this by transfer. The battery served in the defenses of New Orleans, La., from February, 1863; in the 3d Division, 19th Corps, from April 3, 1863; in the Artillery Reserve, 19th Corps, from October, 1863; in the 1st Division, 19th Corps, from January 20, 1864; in the defenses of New Orleans, La., from May, 1864; in the district of La Fourche, La., from June, 1864; in the Southern Division of Louisiana from December, 1864. It was honorably discharged and mustered out under the command of Capt. Irving D. Southworth, at Rochester, August 1, 1865, having, during its service, lost by death, killed in action, 2 enlisted men; of wounds received in action, 2 enlisted men; of disease and other causes, 28 enlisted men; total, 32; of whom 2 died in the hands of the enemy.

Twenty-fifth Independent Battery.—Capts., John A. Graw, Irving S. Southworth. The 25th battery, recruited from the counties of Niagara, Orleans, and Genesee, rendezvoused at Lockport and was there mustered into the U. S. service on Dec. 12, 1862. It left the state on the i8th, embarking on the transport "Sparkling Sea," en route to New Orleans and the Gulf, being wrecked on Jan. 9, 1863, while enroute, and finally reached New Orleans on Feb. 4. It served for a number of months in the defenses of New Orleans, afterwards with the 3d division, and in the artillery reserve of the 19th corps, fighting at La Fourche Crossing, and Vermillionville. In Jan., 1864, the battery received by transfer 117 men from the i8th battery and was then attached to the 1st division, 19th corps, with which it took part in the Red River campaign, being active at Sabine crossroads, Pleasant Hill (where it sustained a loss of 4 killed and 1 wounded), Cane river crossing and Mansura. On its return it again went into the defenses of New Orleans, serving there, in the district of La Fourche and in the Southern Division of Louisiana, until finally mustered out under command of Capt. Southworth, at Rochester, N. Y., Aug. 1, 1865. During its term of service it lost 4 men killed and mortally wounded, and 28 men who died of disease and other causes. 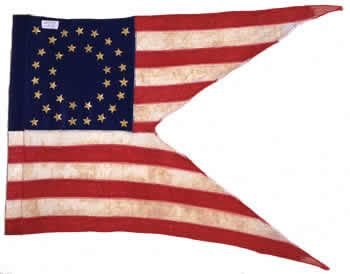 The NYS Battle Flag Collection includes one flag carried by the 25th Independent Battery, a silk, swallowtail guidon in the “stars and stripes”… 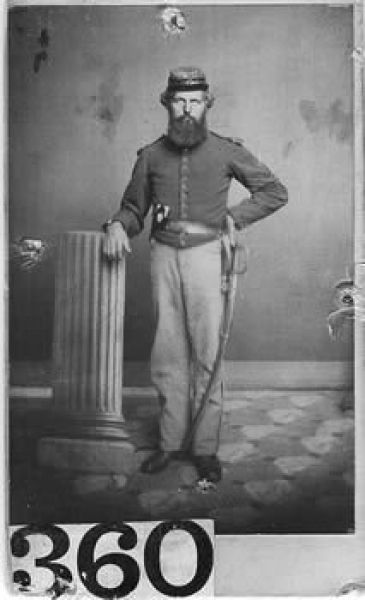 Grow, John A. Oration delivered at the grave of Major-General John A. Dix, in Trinity Cemetery, New York City, on Decoration Day, May 31st, 1880. New York: A.S. Farrand, 1880.
Located at The Library of Virginia.