The following is taken from New York in the War of the Rebellion, 23rd ed. Frederick Phisterer. Albany: J. B. Lyon Company, 1912.

This battery, originally Battery A, Rocket Battalion of Artillery, became the 23d Battery November 1, 1862; the change was, however, not final until it was approved February 11, 1863. It was recruited in the counties of Niagara, Essex and Warren; organized at Albany, and there mustered in the service of the United States for three years December 6, 1861. At the expiration of its term of service, the men entitled thereto were discharged and the battery continued in service. It left the State December 9, 1861, com-manded by Capt. Alfred Ransom, and served at Washington, D. C, from December, 1861; in North Carolina, and the 18th Corps, from April 23, 1862; in the 2d Brigade, 2d Division, Department of North Carolina, from June, 1862; at Newbern, N. C., from July, 1862; at Morehead City, N. C, from October, 1862; in 3d Brigade, 5th Division, 18th Corps, from December, 1862; in the district of Pamlico, Department of North Carolina, and in the district of North Carolina, Department of Virginia and North Carolina, from May, 1863; with the Cavalry Division, General Sherman's forces, from April 1, 1865. July 14, 1865, the battery, commanded by Capt. Samuel Kittinger, Jr., was honorably discharged and mustered out at Fort Porter, Buffalo, N. Y., having, during its service, lost by death of disease and other causes, 46 enlisted men.

Twenty-third Independent Battery.—Capts., Alfred Ransom, Samuel Kittinger, Jr. This battery (originally Battery A, Rocket battalion), was organized at Albany and was recruited in the counties of Niagara, Essex and Warren. It was mustered into the U. S. service at Albany, Dec. 6, 1861, for three years, and left the state three days later, for Washington. On the expiration of its term of service, many of the original members reenlisted and the battery continued in service as a veteran organization. In April. 1862, it was ordered to North Carolina to join the forces under Gen. Foster; took part in the expedition to Goldsboro in December, being called into action at Kinston, Olive Station, Goshen swamp, White Hall bridge, Thompson's bridge and Goldsboro; was engaged at New Berne in March, 1863; then at Blount's creek and Greenville; and in April, 1865. was attached to the cavalry division of Gen. Sherman's army. It took part in the campaign of the Carolinas, being engaged at Washington and Bennett's house. The battery served its whole period of active service in North Carolina and sustained no losses in battle, though 46 men died of disease. It was mustered out, commanded by Capt. Kittinger, at Fort Porter, Buffalo, July 14, 1865. 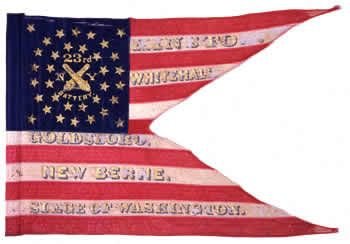 The NYS Battle Flag Collection includes one flag carried by the 23rd Independent Battery, a silk, swallowtail guidon in the “stars and stripes”… 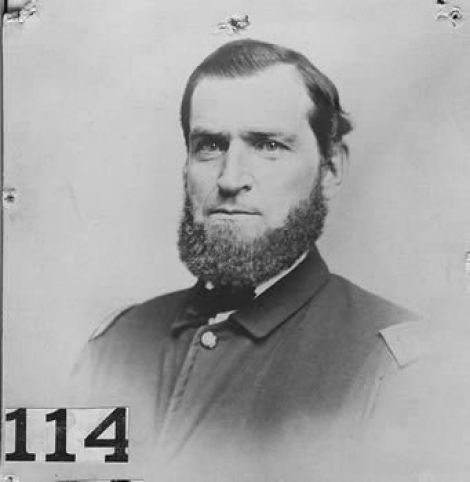 Low, Thomas. Papers, 1861-1865.
Abstract: Letters and a diary, 1861-1863, describing daily life, morals of the troops, intemperance, rumors, disease and monotony. Entries made in Washington, D.C., include descriptions of the mud, Congressional sessions, lectures at the Smithsonian, some poems, and an account of Fairfax Court House, Va. The diary also describes rockets and target practice; the sea journey to North Carolina; the U.S.S. Monitor off Fortress Monroe, Va.; camp life at New Bern; opinions about draft evaders who fled to Canada; the attacks on Washington, N.C., April, 1863; and the recruitment of black troops for the U.S. Army. The correspondence with family members includes a letter written at the hospital on City Point, Va., shortly before Low's death; it describes the reactions of the wounded to the news of Lee's surrender and mentions a visit by Abraham Lincoln.
Number of Pages: 5
Located at Duke University Library.