Organized about December 21, 1861, by the consolidation of Companies A and C, 2d battalion of artillery.
It was then known as Battery B of that battalion until October 1862, when it was designated the 15th battery.
Transferred to the 32nd battery: February 4, 1865,.

The following is taken from New York in the War of the Rebellion, 15th ed. Frederick Phisterer. Albany: J. B. Lyon Company, 1912.

Fifteenth Independent Battery.—Capts., Henry J. McMahon, Patrick Hart. One officer and 18 men were transferred to this battery from the 4th in Dec. 1863. On the expiration of its term of service the original members (except veterans) were mustered out, and the veterans and recruits consolidated with the 32nd battery on Feb. 4. 1865. The 15th took part in the engagements at Chancellorsville, Gettysburg, Rappahannock Station, the Mine Run campaign, Wilderness, Spottsylvania, the North Anna, Totopotomy, Cold Harbor, first assault on Petersburg and the Weldon railroad. It was before Petersburg from June to Nov., 1864, when it was withdrawn from the front and returned to Washington, serving in the 22nd corps and the Department of West Virginia during the winter of 1864-65. It lost during service 9 men killed in action and 3 men from disease and other causes. 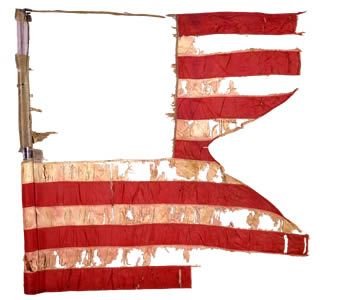 The NYS Battle Flag Collection includes one flag carried by the 15th Independent Battery, a silk, swallowtail guidon in the “stars and stripes”… 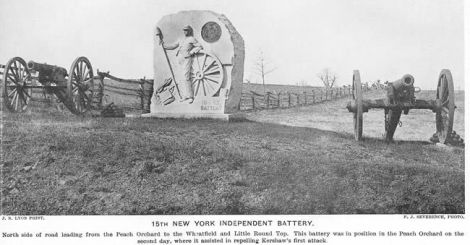